I’m putting the final touches on a Bidule layout that generates MIDI notation based on OSC commands received from grid units. 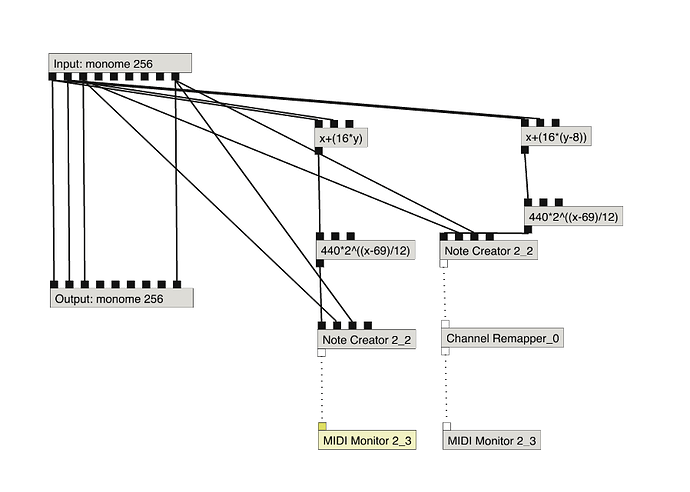 So far the OSC-MIDI implementation is working very well when receiving OSC messages from the Monome Home app.

I’ve been away from monome for the past couple of years (ie kids, work, moving overseas) and have only just installed SerialOSC v1.4. I will be looking into sending queries to SerialOSC directly and assigning Ports to my grid devices from within Bidule. The commands appear to be straightforward based on the docs page: http://monome.org/docs/osc/

The MIDI-OSC side of things is still in progress but showing some promise with a handful of grid LEDs now responding to MIDI input. Once suitably functional I’ll look into refinement. My first crack at an OSC to MIDI Layout in Bidule back in 2011 was terribly bloated but worked adequately (minus polyphony) with the added benefit of turning my computer into a space heater after running for a long period of time.

When complete I will upload the files with a PDF containing instructions and update this forum post.

Are there many here that use Bidule? I am gradually moving more and more to Max but still find Bidule useful as a OSC and MIDI router between several application.

I’ve found another of myr’s apps to be quite handy for outputting midi notes.