Has anyone got their Lubadh into an Intelligel palette? Seems borderline! Thanks…

Yep, run this setup all the time. Fits without issue.

Nice one! Thanks friend.

If you don’t mind, I’d be super interested to see your setup…

Planning on cramming Lubadh and Morphagene in a 62hp palette for a mobile loop box. It will also be my first foray into 1u and really interested in seeing how others do it…

Not morphagene, but in the spirit of the Palette and Lubadh: I put this together recently, and it is a vortex into which time disappears. 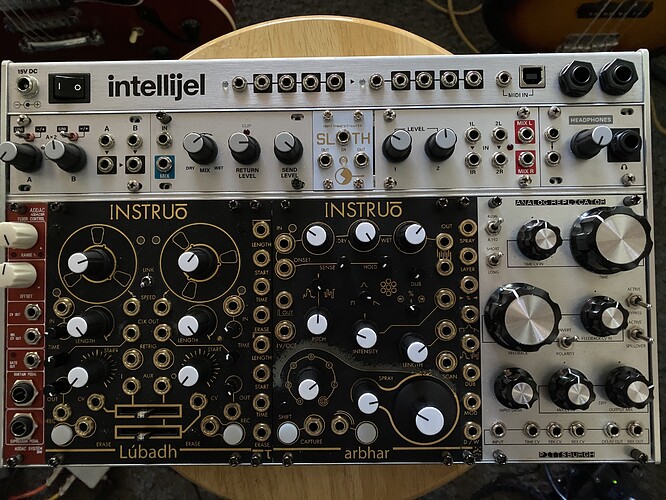 Small enough to sit on top of a messy piano, plays with others via the Pedal IO (and, depending on free hands, the Floor Control).

Now that’s what I’m talking about…

Hey! Great to see a Lúbadh thread appear here!
I managed to snag one not long after launch and has featured fairly prominently in my music since.

Last but not least, here’s my album, Halation, that was released last May. It was designed with Lúbadh at its core! Bandcamp’s above but it’s also everywhere else if you’re interested.

Happy to help with any questions too!

this is great. not missing VCAs?

I’ll be very happy to oblige when I get the chance (and if I can remember to press record before being pulled in); the piano currently and inconveniently shares a bedroom with my three-year-old, and music time frequently overlaps with times when she’s sleeping

This configuration is pretty new for me, and I can imagine ways of using it that would make me miss them but I’m my actual usage I haven’t felt the lack. When I’m just using this little case (maybe with an external sound source) I tend to use my hands rather than CV on sound-related signals — and the physicality of that interaction is part of what makes it engrossing, for me.

And, full disclosure, I have VCAs and other tools elsewhere when I’m trying to do something that requires deeper CV — so it’s only a constraint if I choose it to be.

Thanks, I figured. As a guitarist my hands are tied most of the time but I’ve been itching to shrink the looping/mangling side of the rack into a small standalone case…it will be limited, of course, but as you said the rest of the system could be brought in to supplement as needed…

Pretty tempting module, this, but then I read feedback from people having problems with loop clicks, and also high pitched whine emanating from the outputs. I will be using it mostly for non-synced material (freeform stuff, experimental sounds), so mostly no beats.

I see some people are very happy, should I pull the trigger (also read on muff that there is a v2.0 firmware in the works, but that seems like a long term project for Instruo)?

The clicks come mostly from cutting recordings midcycle. I wouldn’t say it’s modules fault. Morphagene clicks the same way if you record drones for example.
For me it’s very useful module, one of my favourites. Though it’s kinda hard to recommend given people have very different expectations as to what a looper should be.

Keep in mind it is not working like reel to reel (post-speed recording). Instruo looks at it as a plus…for me, it’s one of the major minus points as you need to bounce the sounds between the reels to overdub different speeds.

Did you have a look at the ADDAC 112 ? They do it now in stereo. However, they don’t have the start and length functions. Well, it is a different module…but it may help to compare your options.

I actually also consider it a plus. There pedals and Norn’s apps that work like reel to reel, but not a lot doing what lubadh does. But it’s a nice illustration of people having different expectations and workflows.

I may need to re-think my workflow with Lubadh as I find it challenging to overdub something when the reel is running half speed. The recording head runs somewhere else inside the loop and the new material will play at half-speed…

Personally, I came in with no expectations of how loopers “should” be functioning, and had no preconceived workflow for what I wanted to achieve other than to explore sound design with an interesting module. And I find Lubadh highly interesting and playable, with a great sound character, and with no obviously crippled or broken features I can detect. To be honest, I can’t fully wrap my head around the debate and what the implications are of post-speed recording vs. pre-speed recording. But as I said, there’s not any one particular looper/tape-style thing I absolutely “need” to achieve with this module, so it’s not as much an issue for me as it is for others.

Since it’s something that a lot of people feel passionately about, I think it would be amazing if the firmware rewrite addresses this by allowing you to shift between these two different styles of recording.

Let’s say you record a sinus sound in C3. Now slow down the speed so it becomes a C2. If you now record on top of the C2 a new C3, you don’t end up having a C2 and C3 together rather you end up having two C2 recordings (or two C3 depend on how you look at it).

There are eurorack loopers doing the reel to reel thing like magneto or W// but not in stereo. Lubadh is doing stereo but then you can’t bounce material back and forth. However, besides my personal workflow complaints

Lubadh as this gorgeous sound/compression/transient thing which I haven’t heard on any other looper.

I did have a discussion with Sebastian from Instruo about the reel to reel thing and it seems difficult because of losing audio quality. I don’t think instruo will change this. I just mention it above to clarify how Lubadh works with the current firmware 1.3

What do you mean Magneto not being stereo?

Let’s say you record a sinus sound in C3. Now slow down the speed so it becomes a C2. If you now record on top of the C2 a new C3, you don’t end up having a C2 and C3 together rather you end up having two C2 recordings (or two C3 depend on how you look at it).

Thanks! I think I get it now. So with Lubadh, the C3 you just overdubbed gets recorded as a C3, but since you had moved the speed knob down, in playback it gets automatically transposed down to C2. When you adjust the “speed” knob for a channel, it adjusts playback speed as well as record speed - they are coupled together.

You do have the benefit of two tapes, though, which can be synced or unsynced from each other at any given time, with normalled bouncing of one tape to the other as needed. So if you want to achieve “reel to reel” style results, you can, and probably much more besides, through creative use of both tapes. You lose the benefit of stereo in the process, though.

All things considered, I think I’m probably cool with this tradeoff. I don’t mind bouncing from one tape to the other, I think it’s part of the fun of this module. I still don’t fully understand, though, why Lubadh’s way of recording might be a “plus” for some people, or how you might be able to do interesting things with it that you can’t do with traditional tape style recording.

Lubadh as this gorgeous sound/compression/transient thing which I haven’t heard on any other looper.

Agreed. I’ve had w/, Morphagene, and Nebulae v1/2, and none of them have this quality going on. And tape degrades beautifully on it. The module is worth considering for this alone.

What do you mean Magneto not being stereo?

very common setup for fx with stereo in/out - truly independent stereo paths are the exception rather than the rule.