UPDATE: after much more than two weeks, teletouch is now live!

Its been so much more work than i ever could have expected and I have learnt so much. Thanks so much to @zbs @sixolet @dan_derks @zzsnzmn for trusting the project and supporting before it was much of anything, you’ll have your built versions very soon!
And thanks @scanner_darkly, @dewb and @attowatt for help early on with getting my head around i2c behaviour, this project would have gone nowhere without your help!

As per lines rules, please no trade discussion in the thread. Further details of teletouch can be found in the link on my profile.

It’s a teensy 3.2 based capacitive touch plate keyboard with some extra goodies, inspired by the buchla music easel. It started out as a personal project to try and get some music easel like functionality into my rack, but making use of the massive flexibility that teletype offers.
After I realised the keys needed to be pcb based to consistently work, I got deep into pcb design and three iterations later its very much not a personal project anymore, i’m actually teaming up with @livartz to put them in some-sort-of production. 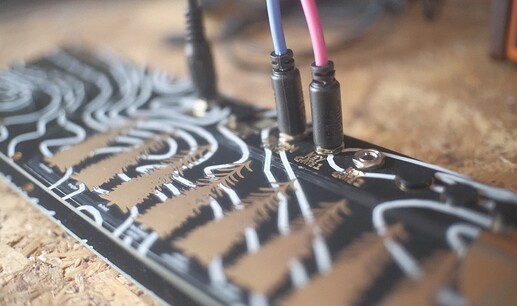 all values in teletype are queried with the IIQ x generic i2c ops, so their functionality is extremely open. For example the row of 8 buttons could be bass notes, they could be program/mode changes, they could switch between entire scenes or act as an alternative to the F keys for triggering scripts.

sounds cool, i want one!

as per lines rules, pls no discussion of trade on this thread. There’s a link in my profile where you can find out more about them though

is it open source?

the software is, and the schematics will be posted after we have sold the first few batches, but the hardware (aka gerbers) is not. I considered it for a long time, but as a disabled trans person who cannot work, I really cant afford to make this many hours and development costs of the multiple iterations it took freely available, potentially ending up for sale on places like pusherman. The code and schematic will be available to learn from, but you wont find any files to print pcbs yourself.
PCB only will be an option of those wanting to solder one themselves though, and this will end up much cheaper than having to meet the minimum order of 5 pcbs anyway.

A word on teensy availability
we have a very very small stock of teensy 3.2s for our initial run. Im (already) considering a redesign, but no other teensy have 12 capacitive reading pins, so a redesign would be quite a thing to do. We may just wait out shortages. I started designing these well before the teensy shortage and its a bit of a bummer, but im hoping enough people have a spare teensy lying around to diy their own.

What a beautiful instrument! Bravo!

This is really sick! Really hope I can get my hands on one of these when the time comes, really beautiful design

Congratulations! This is amazing and I‘m looking forward to building and using one.

Congrats, looks like a good all in one controller cant wait to try one out!

wow, looking great! looking forward to get the pcb and build one. congrats on this beautiful project

I’m very excited about this, looks beautiful. Would it make sense to offer a BYOT (bring your own teensy) version? Or would that be tricky to put in place after the fact?

This is definitely something we’ll consider if enough people are interested. Perhaps even an everything-but-the-teensy kit.

this looks great! would love to build one

You shine! i love how your offerings conjure mist, earth, folk and fae! Tele-Touch is beautiful, as an object and interface! dreamy feature set and form factor, goodness it’s lovely

this would be nice, since the teensy is still easy to get in my area.

wowowow! such an exquisite instrument you have created, congratulations.

i just checked the pjrc website which states that a “small batch” of teensy 3.2 boards is currently in production as of March 28.

Good to see this lovely creature come into the world.
Well done. Can’t wait to build one!

do you have a sense for when pcbs/kits might become available?

A small run of PCBs are in manufacture right now, and we are working on the build docs. This small run will help fund a bigger run soon after too. But it’s looking like a bit over a week at least, maybe closer to two weeks.

super duper. i (and i imagine many others) can’t wait!

While Tele-touch PCBs are being fabricated, you can snags up the mcu powering it. Adafruit just got some Teensy 3.2’s in stock! Good price too: Teensy 3.2 + header : ID 2756 : $19.95 : Adafruit Industries, Unique & fun DIY electronics and kits