iOS Audio for iphone and ipad

beatmaker 2 is cool for iphone 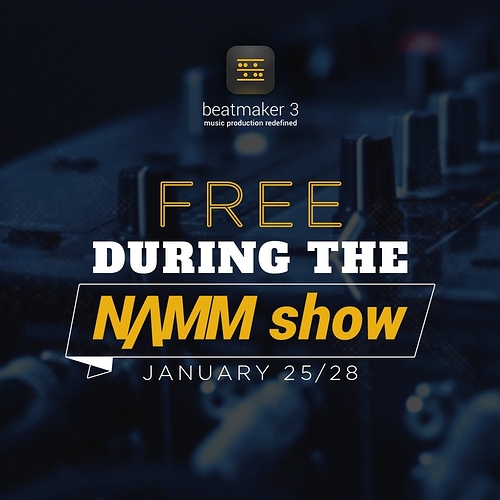 I use it a bit on the iPad. It’s a lot of fun, and the feature set is getting expanded at a nice pace.

I’ve just released an audio app for the iPhone called prgm, but it already has it’s own thread (Aleph prgm and iPhone prgm) so I’m just hijacking here

¿has anyone gotten a monome grid/arc
controller to interface with an iOS app?

I can’t comment on this directly, but since it’s SerialOsc you might need a custom handler for it. That said, lemur might make an ideal companion, since you can then map the grid functions in a programmatic way to other instruments running either remotely or locally. That, a small hub with some MIDI or CV controllers and your iPad could pretty quickly turn into both a router/processor for the grid plus an augmented control surface of it’s own.

monome to iDevice won’t work without some hardware modifications. It seems to me that the second-easiest (though obviously still not easy) way to achieve this goal would be to design a new logic board for the grid/arc that can speak USB class-compliant MIDI; basically, modify the circuit and firmware to cut the FTDI chip out of it.

But then, doing this would also require updating the various modules’ firmware and as well as serialosc (and/or individual apps?), otherwise the device would be designed out of its own ecosystem.

The direction to take with serialosc is non-trivial, and though I haven’t looked at any of the module firmware, I would suspect that it’s all operating at the serial protocol level, and adding midi on top of that may be considered too much overhead. Same with the midi protocol itself— mapping onto note-on and note-offs makes sense for individual buttons, but then you’d lose the compact tidiness of the row, column, and map messages. That could all be done over sysex, though, and serialosc could theoretically still just map the usb midi + sysex to the osc world on desktop… Not an insurmountable task, but not small either.

I’ve bounced the idea of taking this on as a side project back and forth in my head a few times over the past 6 months or so, but it’s never been compelling enough (or light-weight enough, given the ecosystem issues) to actually decide to take it on. If someone else decides to give it a go and spin a group buy out of it, I’d be interested in participating.

The easiest option, of course, is to buy two launchpads (and some Xanax to relax your aesthetic sensibilities whenever you want to use them)

The only problem with that might be if the MIDI bandwidth is just too low, but the use of sysex does make a lot of sense.

I could also see going a sort of opposite mode: using it as a class compliant audio interface if connected to iOS and interpreting the audio stream as an encoded state-stream which could again be mapped to serial-osc, sort of like the Expert Sleepers’ stuff does.

That would be an interesting approach… it might still be fraught with speed bumps though. I’m not sure if iOS provides a way to select which audio device an app uses (at least I haven’t seen this in any of the apps I use), and I’m fairly certain there’s no way to set up an aggregate device, so this approach may leave you unable to get actual audio out of the thing unless you also built an actual audio interface into the grid/arc logic board, which introduces physical design issues too.

A quick search indicates that USB midi may actually be able to send up to full usb bandwidth:

What is an acceptable MIDI bandwidth over USB?

No idea how well CoreMIDI would handle that though.

it’s SerialOsc you might need a custom handler for it.

thank you @equipoise and @rknLA for your knowledgeable response(s)…
…so…if…there wuz an iOS driver on this page for serial osc…
http://www.ftdichip.com/FTDrivers.htm
then it would 'just work?

I see the digital grid represented on Takete
and imagine…