would be so cool if possible???

it’s there, under mannequins. needs a higher res picture.

thank you!! i searched “isms” on the site and didn’t find it… and also looked under monome… totally spaced on mannequins which is pure stupidity on my part!

unless you’re going for a complex switching setup, you could save some space by removing the switch from the rack and just using the built in one.

yes! thank you for the help… just starting out here. going to redo the case tonight taking your advice and now a bit smarter from some other surfing today. last night hyped on new monome gear, always fun to think about…

no problem. iirc even after sticking the entire monome and mannequins lineup (minus switch and RIP) into the case, you’re left with ~40hp.

this is what i ended up getting:

rings is pretty interesting. i received mine a few days ago-- sort of suspect it’s going to be a one-trick pony for me, but it’s a nice addition to a setup like this (mine looks similar).

also, this might be a good topic to use for sharing isms patches in the future.

sounds great! i’m trying to find a good 10hp to fill the final gap in my rack. the ERD/ERD will go there nicely… they said they are releasing a new version in early 2016. do you have something else there in your setup?

I’d definitely find something with some control rate output. Some kind of envelope / lfo / chaos generator would likely do well in providing some more subtle movement & variation in your patches.

for this system i also lean heavily on monome and mannequins modules, so i prioritized adding effect-based modules. the quadra will eventually be replaced with the mannequins just friends. 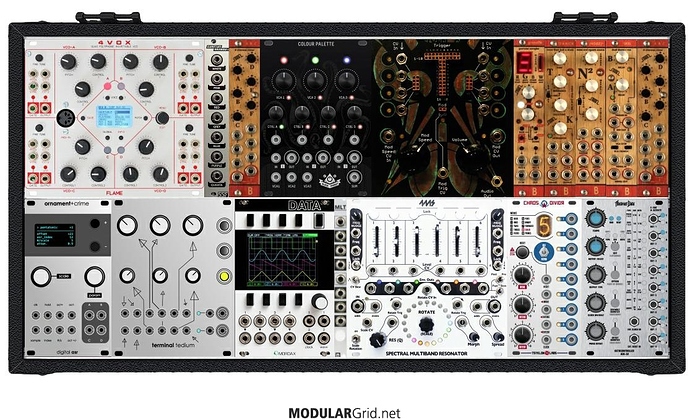 For example, these images don’t show the Befaco Even VCO kit sitting on my workbench waiting for a soldering iron, nor the NS1nanobridge from soundmachines that I will use to integrate my NS1nanosynth with eurorack. I’m kind of expecting some turnover will occur over the coming months and years.

Flame Tame and rené (with the quantizers…) seem redundant to me !

Also redundant with Teletype, but then again all three are different as well. Which is why I imagine it will change a few times before I actually get there…

Main thing is that at some point I realized that 120HP wasn’t going to be enough. 328HP may be too much, but I’m sure I’ll find a way…

(looks up at the mention of Just Friends, rushes over to http://www.whimsicalraps.com/pages/just-friends just in case, is disappointed)