Just got my Grid64, some questions

I just got a grid 64, and while installing it I ran into some questions I cannot seem to find the answers to.
I am using a win10 system. The goal is to use grid for controlling vcv rack (the monome plugins and also as a generic controller).

These are the questions:

You do need something to communicate with serialosc (or with your grid directly over serial, without osc) and bridge the gap into MIDI. That’s usually max, but there’s no law which says it has to be. And in fact, there’s an active thread here right now about building a cheap hardware device to present the grid to your machine as a class compliant MIDI device, bypassing all such complexities.

If it is max, you would only need to purchase that if you wanted to edit a patch. Running an existing one requires no such license.

But, yeah. Specific options, I have no idea. Someone else will have to chime in.

thanks, 0<
Could you help me find that thread?

I mean, it was literally the thread just below yours on the front page, but sure:

@okyeron cool if you want to put something on GH i’d be happy to contribute, though i’m travelling without grid or much extra hardware until mid-january. what i’m thinking is that another kind of “elegance” can be achieved by adding a small scripting layer (lua) to the adapter. using a 128-button grid as a 1:1 midi controller is minimally useful by itself. and requires software to manage state and mappings. something like isonome has a very small footprint, doesn’t require complicated timing …

It starts abruptly, because it was branched from this other thread:

I’m having trouble finding an answer via searching… so monome grid 128 would seem a perfect match for MIDI CCs (of which there are 128). Send a MIDI CC to change the brightness of a button. Grid could send a CC to indicate a button has been pressed. Or a note on/off message (128 of those as well). This would mean: compatibility with iPads plug-and-play support in hosts no need for developers to integrate 3rd party code to talk to the device

So, there’s some background and related info in there.

Anyway, @okyeron has the beginnings of something working already, using the Teensy 3.6:
https://www.pjrc.com/store/teensy36.html

And a USB host cable:
https://www.pjrc.com/store/cable_usb_host_t36.html

I don’t think he’s published his code yet, but I’m tagging him so he’ll see that you’re interested.

(If he does share his code, it will probably be in that first link)

Thanks, hadn’t noticed that, although it was there shouting at me

from the setup page:

the max 7 monome package is a collection of applications and tools for Max 7 which can be used with the free runtime.

the package has a grid-to-midi patch included. you’re all set!

Thanks, Tehn. That’s true, of course. But the question remains if it’s practical to not be able to edit and save max patches. Eg. when inputs or outputs change. I am using that grid-to midi patch atm, and I have to set the connection to the grid manually. So I was really meaning to ask about other people’s practical experience with using this.

setting the connection manually appears to be standard, at least in my experience on Mac. think of it as part of plugging in.

I think many people would say that Max is worth it. But they also have a 30 day free trial and a generous student discount program. There’s also Pure Data which works with Grid.

You might want to check out the grid studies, specifically the Pure Data tutorial:

is there a program or another way that will convert the grid messages to midi notes, apart from running Max?

yes, it’s a pretty simple task in software, so there are plenty of free environments that are suitable. if you know python (or want to learn) then you could cook up something quickly with pymonome library, GH page includes some midi-focused examples:
[ https://github.com/artfwo/pymonome-apps ]
and here’s the forum thread on pymonome:
[ // pymonome // python applications made easy ]

i’m sorry i can’t offer something off-the-shelf right this second but maybe someone else has done something like this.

In the meantime, I’ve learnt a lot. Not all good, but not all bad.
First, the grid64 is a bit impractical for controlling the Monome stuff because they are all designed for the 128 grid. So you get half the controls.
And it seems grids usually have two led settings (bright and low) (three if you count off as a setting, too). MIne just has on, and off.
Apart from that, everything is working ok (although I’ve had some crashes)

Newer apps generally are geared towards a 128 with per-led variable brightness, but that wasn’t always the case, and the old apps are still out there.

This was one of the best:
http://www.rodrigoconstanzo.com/the-party-van/

There’s more in here, though I’m not sure which apps will prove compatible. Some testing required. 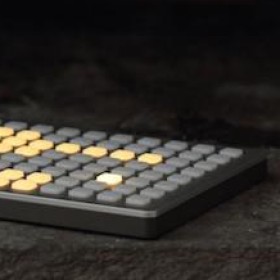 monome-community has 30 repositories available. Follow their code on GitHub.

I will say, anything with “40h” in the title or description is likely to work. The 40h was 8x8 and on/off. It preceded your unit, but backwards compatibility is your friend