Hi,
I would like to share with you my latest album which is a recording of a live stream which I did online because my gig got canceled:

It was 100% improvised, the only preplanned thing that I had was to try playing a lot with noise with only sparse melodies showing infrequently. It ended up being maybe too repetitive but overall I am happy with how it turned out.
Gear wise it was Juno through BBD Delay into Organelle for looping then into clouds, Doepfer and Bastl Grandpa as noise generators and two Befaco Rampage outputs through o_C hemisphere app that I wrote which applies various math functions and waveshaper to inputs (the digital noise that you hear through the whole song is that app - if you want to try it yourself here is source code: https://github.com/kfirmanty/O_C-HemisphereSuite/blob/punch-effects/software/o_c_REV/HEM_Punch.ino). The whole summed signal was sent through Bard Synthesizers Tube/Saturator (you can hear it affecting signal around 1:30) and into Eventide Space for reverb. It was a lot of gear and end result sound rather lofi but I found it very playable given there were no hidden menus and stuff like that in gear that I used.
And here is a bonus pic of my dog with the gear (sans BBD delay): 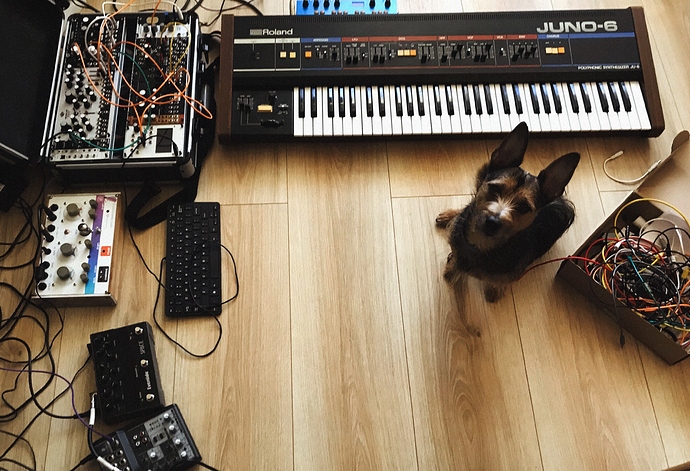