I absolutely LOVE kria on my ansible module. @tehn, is there is a chance it will be released as a max or max4live patch ?

there has been discussion of working on the firmware frameworks to facilitate cross-compilation on different platforms. this endeavor needs a new thread, however.

i just split my stream into “duties/professional” and “creative”

yeah, i got an “office” and a “home” context as well. keeps me sane.
obviously, if you live and work in the same place, that wouldn’t make much sense.

I think my office todo lists are mating, because they definitely multiply.

Bumpin’ this thread up. I have loved Kria in Ansible and I think an m4l version would be the stuff of dreams. Any update on this front? I have no clue how hard it would be…

What does it take to port it to Max? I’m still a baby max patcher, but I think I’d be interested in figuring out how to put it in m4l after that.

kria is written in c. you’d need to port it to javascript, running inside of max. so probably not trivial unless you’re versed in javascript/c in addition to max.

as much as i’d like to do this myself, i still can’t commit. however, the beauty of kria being open-source is that someone with the skills can take this on whenever they want.

ahhh, ya. I’m certainly not qualified to do that

Another avenue for software-izing Kria, would be to port the C code to VCVRack. Not on my TODO list, but I’m up for sending flowers as well.

heh - aleph kria was ported from the eurorack standalone inside of a puredata wrapper. Pretty sure the pd external still works. Also whitewhale & meadowphysics. So yea it’s there for pd users but afaik noone’s touched it.

How hard would it be for a pd newb to get this external running with basic 4 channel midi output?

what OS? I can only help compiling for linux unfortunately - don’t have mac or windows here. on my platform took me about 10 mins to get that cooking in a patch - btw great suggestion!

Somehow got so caught up in other things I didn’t think to use this combo, even though I have a pretty fun MPC/midi setup up and runnning.

first unzip that tarball. The code in utils/pd works for me. “make” builds bees_op.pd_linux, copy that to pd-externals directory & then open the bees_ops_grid.pd patch. That gives some hints how to actually use the objects - basically bang the second inlet of each of those grid ops with a 1 & then you can switch focus between the grid ops.

So would I be naive/delusional to think that I could do this:

I have now clue what im talking about…lol

i’m a lil confused by this part… i see “makefile” and “makefile.pdlibbuilder” but i’m not sure what to do with these… how do i run them?

So would I be naive

The problem you will encounter is I/O. An aleph has very different I/O than Ableton Live. So you’d have to change things (quite a few things). This means it’s not a question of wrapping/conversion, but rather a question of editing and writing code.

ahh, ya im down and out for that. I’m interested in @shellfritsch 's direction, so I’ll be trying to do that too. You’ll prolly beat me tho!

okay, update as I slowly chip away at understanding this (im on mac OS):

[edit]
This is what I get when I execute “make” on the /pd folder: 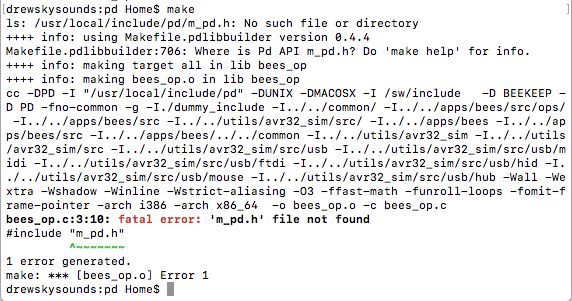 [edit 2]
ah, then if figured out with “make help” that I could point to my /src/m_pd.h which brought me to this error below…im so deep in stuff i don’t understand, lol… 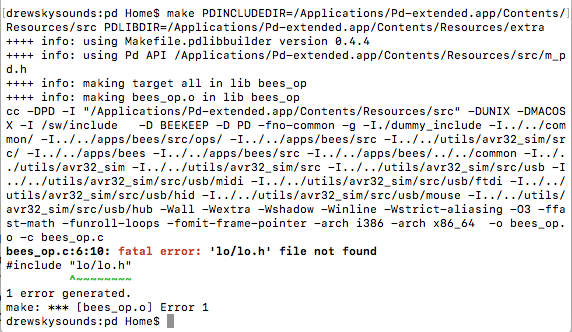 Not at a point where I can help debug compiling the Pd external, but I did want to mention that the preferred way to get make going on a mac is to use Apple’s XCode command line tools.

This guide does a nice job of hand-holding through it.
http://railsapps.github.io/xcode-command-line-tools.html

looks like you’re missing liblo, which is a dependency of the library. a little bit of googling suggests liblo should work on a mac. See if you can install that library somehow - I only know how to do it on linux http://liblo.sourceforge.net/