I just got my Noon in the mail this last week, and it is an absolutely amazing and singular machine that’s doing things I’ve never experienced in ways that I’ve never done them before. I thought there might be other folks who might want to discuss the instrument and their methods with it.

Thus far I’ve been feeding the Noon gates from Tempi and some Square LFOs from Batumi, and I’ve been playing with sending the device through my SYNTRX and then through my Retromechanical Labs Jekyll n Hyde dual filter box, mostly just because this is where an opening in my signal chain at the moment, but also because I thought it would lead to some interesting results.

How are other folks getting along with the Noon? I urge you to share own experiences, methods and results with the instrument here.

EDIT: I added a short clip from an Insta story that I shared; apologies for the quality.

I’m anxiously awaiting mine! Thanks for sharing the vid - there haven’t been many video examples of drones being created with this beast yet.

On paper it’s a passive drum synthesizer, in practice it’s feeling like it’s a lot more than that though.

At the core of the experience there are a lot of opportunities for chaotic and inconsistent behavior, and what feels and sounds like a lot of what I’ve experienced before in “voltage starving” in distortion circuits. All of this is built around a rhythmic paradigm, but even that idea that this is a “rhythm making” instrument is seemingly nothing more a suggestion as this this is just as capable at accepting continuous voltages as it is triggers or gates.

Because the device is so wildly wide open, both in terms of how one might use it and configure it, and in terms of what one might feed it, and also because there really isn’t any user manual or other guidance available for the instrument, I’m hoping folks will share their experiences here and help both you and I understand more about what this thing is and what it can do.

so curious what each circuit is though - so much timbre for being fully passive!

Same on all counts.

I’m also very curious to know more about each circuit. The “user manual” (see attached image) really doesn’t say much about them, and I haven’t spent enough time with them individually to get a vibe on what they’re all really doing, other than to say that I’m quite certain that Circuit 1 is sounding like the “kick drum” circuit.

Because everything is so interconnected (or very easily can be) it’s very easy to let go of the critical mind and just get lost in the sound design, which I suppose is a core aspect of the design and philosophy of the instrument. 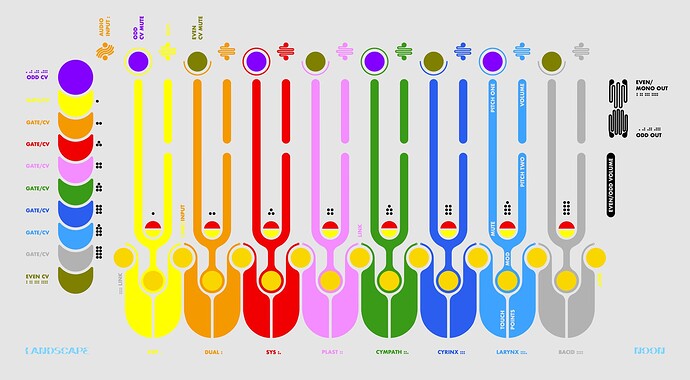 Your description and perspective on Noon makes me so excited to try this thing! I had similar feelings with Stereo Field, as the more time I spent with it, listening to how it would respond to my playing and stimulus, and being surprised by seemingly unpredictable and unexpected results, the more possibility seemed to emerge from it. Landscape really has a knack for creating instruments with boundless potential…super stoked to see and hear what people create with Noon!

I’ve always really wanted a Stereo Field, but I think what kept me away from it was simply that it looks like something that requires a hand or two to be on it for long periods of time. Hopefully someday I’ll get one.

That said, yes, I’m feeling like the Noon is very much a continuation of the Stereo Field, both in philosophy, but also very deeply in how it sounds.

Noon also reminds me a lot of the Retro Mechanical Labs Electron Fuzz in the “starved circuit” flavors and in the very musical unpredictability, and very much of the Lyra-8 in how it really asks you to just let go and prioritize the moment and the shifting instrumental responses rather than trying to intellectualize the instrument and think too deeply about shit.

I’d be interested in trying one together with an OXI One.

Couldn’t agree more with the OP. This is a really special device. Made for making new sounds and not for treading well traveled territory.

It’s also beautiful to look at and use.

Mine is in the mail, landing on Monday hopefully.

How is the audio output? Line or modular level? Power dependent? Can I plug it straight into a Norns shield without risking anything?

I think the “standard” audio outputs (“Even/Mono Out” and “Odd Out”) are line level. I’ve got these outputs running into my Jekyll n Hyde dual filter box without any gain issues, thus I’d have to believe you should be able to run them right into your Norns shield without issue. That said, the Noon does run quite hot on the output, but there is a Master Volume fader to adjust accordingly.

Each channel also has an individual output on the top of the unit; Landscape announced the addition of these outputs very late in the process, and when they made the announcement they specified that these outputs would be DC-coupled, leading me to believe that they must be modular level outputs.

i haven’t measured them specifically, but the individual outs appear to be the same level as the odd/even outs. and i get varying signal strengths depending on the amount of current fed through it - he told me it was designed to work well with a beatstep pro, which has 12v gates, and i get lower output as well as different audio response when used with 5v gates. i generally need about 20-25db of preamp gain with the BSP, slightly more with euro

Whaah when will the preorder round two again, any idea??

Just picked up mine today. Super simple try out. I feel blown away by the possibilities of this instrument. It is a lot more already than I thought when placing the order ~6 months ago.

What are you feeding it in this recording?

Nothing too complicated. 16n in odd/even + some channels and 4x Ansible/Cycles in the rest.

…Is this instrument not destined to be paired with a Recursive Machine?

Love all the sounds this thing makes.

I think it will hang well with an IFM lunchbox.

i get varying signal strengths depending on the amount of current fed through it - he told me it was designed to work well with a beatstep pro, which has 12v gates, and i get lower output as well as different audio response when used with 5v gates.

My gameplan for mine is(/was) to build a bela mini+cape thing to be able to drive the Noon directly from audio input/analysis into the bela (like I’ve been doing with SP Tools) but I’m wondering if I’m going to want/need something to buffer or up the output from the bela cape to give beffier voltages. Or perhaps a different hardware approach/solution altogether.

Does anyone know of anything that you can hook up to a bela/pi that will let you output 12v gates/CV (without being in a modular form factor that requires dedicated/specific modular +/- power supply). Basically I want to build a standalone “box” thing, and if I have to build that around a modular formfactor that gets a lot more expensive and clunky.