How many of you record tracks and layer these vs create all sound in a single take?

Always one take here, but that’s just how I want to do it. It’s very satisfying getting the “perfect” take after working on a piece for days.

Over the last two years or so, I’ve recorded multiple tracks in a single performance. My current setup allows for 22 tracks.

Mixing, for the most part, has been simply setting fixed pan and volume values for each track to best convey the performance.

That said, I’m not tied to that approach.

Every track seems to create its own process, for me.

When I was making dub techno I found that there was a great energy that came from mixing down to 2 tracks with no overdubs or recording individual tracks.

In school I have been doing a lot of work that’s more generative, where there’s no real beginning or end, and so I set up the mix as I best I can knowing the general parameter space I’m working in, and it may not get recorded at all.

I’ve gotten pretty accustomed to not multitracking because I get paralyzed by the ability to not commit to decisions. Pushing everything down to two track as calling it done helps me finish tracks.

I’m normally always recording multiple tracks for an album, changing things slightly as I go. It would be cool to say I do everything in one take but if the end result is not what I want for a release I feel no shame in tweaking it to my liking.

layers when the song calls for it

This is how I tend to work too. For recorded material usually transposing/time shifting to make them fit.

Completely depends on the piece, other methodologies (composed? type of score? improvisation?), instrumentation, and whether I’m doing a sketch for a limited audience (or just my own personal development) or a fully realized recording intended as a “release”.
And these can merge - eg simple one take sketch becoming the basis for a much more complicated piece with multiple tracks, edited found sound, etc.

I’m an amateur so my approach is as student. That said I always look at the modular as an instrument, really the whole “band” and so I’m always trying to do it all with one patch.

I feel like there is room for me to advance my technique.

One take, record to stereo, and unpatch, all in one session.

(One thing I recently did had a mostly steppy complex LFO controlling pitch, and the voice went through a reverb – and then manually pitch-shifted each bit back to a single root note in post-production, so the pitch sequence turned into timbral shifts with cool artifacts between them. :D)

I like to use a lot of randomness in my patches, so I generally record repeated takes until I get the moment I’m looking for.

Almost always one take, recorded to multiple tracks for mixing later. I experimented with a midi module to control the timing of the modular from my DAW, so I could add things in after the fact, but I found that my tracks ended up cluttered. I usually have at least four independent tracks recording, so that’s usually enough to fill out the sound.

Plus I do enjoy the process of setting up a patch, exploring it, practicing a bit, and then trying to nail a good performance.

Live except for the tape machine.

Well there’s a lot of mixing folk / pianos / transverse flute / vocals with synths and drums in my personnal work, so “one take” is kind of a no go for that approach, although I do now have the space and the time to make sure all the acoustic instruments and vocals are now one take only (which takes a lot of hassle out of editing for those who know what it means to edit a full band for hours), and I’m also mostly improvising on the machines and keep the most interesting / spontaneous take in the end.

That being said, I love it when a lot of the musicality comes from the mix, when it’s not just there to make it sound “professional” but can also distort, push the song / track into another direction for a while and bring it back to its original state. There used to be a lot of “one take on the tape and let’s go with that” in mixing too in the recording studio days, now I guess it’s so very tempting to tweek forever it’s hard to push yourself to that kind of behaviour. Also, modular feels often to me like a throwback of those days : a lot of it is actually real time “mixing as a musical composition”. So it’s all so very blurred into one giant blurb. But one take performances really does lend itself better to a certain kind of approach where A/ the band is the modular and you’re kind of juggling between what the machines are all doing at the same time without needing you to be actively acting on every single bit happening at once B/ You’re a solo performer on a single instrument.

I like to do one take, recorded as a mono or stereo track, and then just do mastering if I like it when I listen back to it. I enjoy the spontaneity of it, and even the mistakes I make in the recording. I do practice the patch a few times before recording, but I enjoy being able to explore the patch and then just hit record, and that to be pretty much the final piece.

interesting to see the amount of folks in the ‘one-take’ camp here!

I find that I tend to make a lot of single take recordings when I’m experimenting with processes (generative/indeterminate/algorithmic/jamming a single instrument voice etc), then building up an archive of these unrelated-except-by-proximity materials and micro-editing the heck out of them to create larger, linear compositions.

Weirdly, I find that this approach gets me to a place that generally feels like I’m achieving the things I’d like to aesthetically/musically, though I find it less conceptually satisfying than the hard-line formalism of a single take recording of a process, a la something like Mark Fell’s Max->MIDI systems or Keith Fullerton Whitman’s Generators,etc approach.

Unfortunately, when I go the systems/single-take route, it feels conceptually/formally satisfying, but usually less compositionally successful than when I use a “non-real time” music concrete/tape collage approach (pic from a work in progress for context) 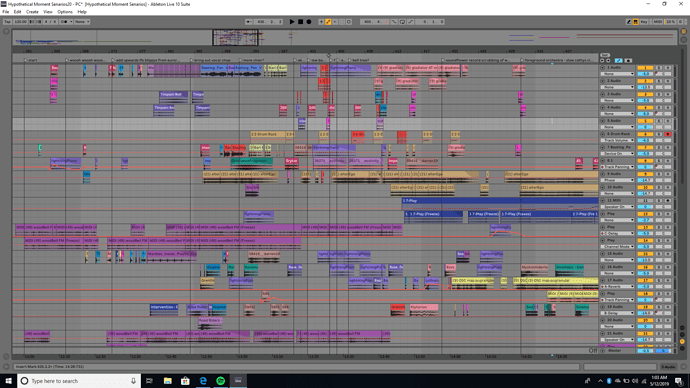 I think it also does say a lot of the people on this forum (a lot of modular users not very surprisingly !) and modular is kind of a hardware little studio / little music band in a box, with a lot of automated things that you then interact with. It’s also a hassle I think to take a lot of individual outs out of a modular to mix them afterward as it can lead to things not being reproduced exactly the same way as they did when they interact inside the modular (that and most modular users here seem to have some sort of “end of chain” effects that kind of act as mastering processes AND musical FX).

I also second the idea that post processing and the long and strange road that you take when you slowly add little bits and pieces of ideas and see them grow to make this “one thing” is a little like gardening, it takes more time, sometimes some plants just can’t live there, sometimes other thrive on eachother and end up growing in ways and places you didn’t expect, and I also like the fact that it takes time, that you get used to a composition and suddenly, because of this one thing you add somewhere, it’s new again and you have to look at it completely differently. It happened to me many times and it’s like magic everytime. So yeah I think there’s a space for both and the particular modular friendly / enthusiast approach of this forum (which, from what I read, comes for a lot of people from wanting to stray away from the computer), does push toward the one take mentality, that and the fact that there’s a lot of ambiant / minimalist / texture first approach here that also helps focusing on one task rather than the general organisation of multiple little bits and pieces together for days / weeks / months.

But that’s obviously an interesting topic because I think those two processes have been opposed for too long when they’re really just complementing eachother and answering different questions at different time to different ends.

This is how I usually work too. I very much enjoy the evolving process of recording long one-takes and then layering them to form new combinations, resembling paint layers on a canvas, where every take takes the whole into a new direction. Often I end up removing earlier takes too and in the end it’s usually a combination of what’s left when the whole feels ready enough.

The concept of to recording a single take sounds very intriguing to be and I’d love to be able to do it but somehow my mind is not wired like that. I always end up with things I don’t like.