Let's talk about your ios and modular integration methods!

Are you using the iPad as a host for the sq-1? Is sq-1 just acting as a midi to cv converter?

I hadn’t tried that yet. Although I have connected iPad to Ansible using the Sevillasoft midi to midi connector.

Is sq-1 just acting as a midi to cv converter?

Yes exactly. Everything the SQ-1 gets as USB MIDI (on two channels) is sent out to its CV/gate pairs as long as its own sequencer is stopped. Otherwise its own sequence takes over.

One other thing I’m finding as I run different groups of apps within AUM is that there are different combos of sync going on. Tonight I noticed I had to stop and reset AUM to tighten up timings and line up the “1”.
In my case the lead clock is MIDI Link Sync.

iOS is my primary way to record the modular, I do effects and recording on iPad but rarely do sequencing and control with it.

Loopy Pro has changed everything, I used to use AUM but now Loopy handles all the routing, fx and recording. The fact you can totally customise how you want it to operate is amazing.

I’ve gone with the ES-9 with iOS. It was stupid simple connecting. I initially used it with MiRack or AUM + MiRack, but Lately I’ve been using with Drambo. While MiRack is like an extension of my small eurorack with a familiar interface and logic, I find it sometimes easier to use Drambo. Requires a bit of mental adjustment, but it allows me to route auv3 fx modulations and other signals in and out conceptually different. I may buy the midi breakout to extend with my other gear. Eurorack to iOS via the ES-9 has been the best thing ever.

MGFM
I downloaded the trial of Loopy Pro a couple of days ago mainly to see about importing some of my very long “drum dubs” (5-20 min) and was trying to lock them in to a reliable tempo mapped playback either as host or inside AUM. So far I wasn’t able to get it solid, but I’ll keep at it. My dubs are all exported from Ableton at tempo and labeled with BPM and measure length so it should work eventually.

DatGood
I’m having great results with my Presonus/CV.OCD combo so far as the Presonus gives me 4 really decent mic preamps plus 4 additional line ins and a bunch of 1/4" outs plus 2 headphone amps, so I doubt I’ll get any ES stuff anytime soon altho it sound amazing. I really want to dig more into Drambo. I’m so interested in seeing all the different ways folks are using it. My problem has been that I build up a bunch of different complex system configurations and then forget how they actually work. It’d be nice to set up some kind of study/work/help group and get different perspectives on workflows.

It’d be nice to set up some kind of study/work/help group and get different perspectives on workflows.

I have a google group with some friends from lines and some not from lines. It’s ostensibly about Ableton but we’re not dogmatic.

We have occasional zoom hangouts to talk about whatever and it’s really nice.

I suggest others might enjoy doing something along those lines (!) based on interests and friendships…

Oh snap. I wasn’t aware of this thread. Considering I’ve not figured out how to export audio…. Massive Thanks.

Ya, I’d like to get active on that thread again too.

As to all of this, I’m finding there’s a lot under the hood compatibility issue wise with sync and timing.
Tonight I just now noticed big timing differences between sending the same sequence from StepBud.
Zeeon synth clocks tightly, Korg Berlin inside of Gadget is all over the place, very not groovey.

This is all running on AUM
Lead clock is MIDI Link Sync
I mean this stuff is amazing, but are there just lots of little differences that make every combo of apps a little sketchy? That’s not even factoring in other “shell host” of sorts Like Drambo and Loopy Pro that can either be the host that can house other apps or run as an app inside something else.
Also working with some older ipads and am leaving audio inputs off the table for the time being, as I suspect it’ll introduce new issues.

Had a great ios method share session with my pal Bus Crates yesterday. He’s a big, funk, boogie, soul and hip hop head and uses a lot of different ios apps in combo with analog synths, hardware samplers, drum machines and Rhodes. Showed him StepBud yesterday and he freaked out when he realized he could create some very specific swing feels using the swing per step sliders. Always cool to get other people’s approach to the tech options.

Grab StepBud, it’s $5 and has some really cool features and innovations. Like a global slider bar for each value set. Adjust the gate length for all steps with one quick gesture.

I’d say THAT’s the prob… along with running those relatively heavy apps. I always suggest what you called “shell hosts”. For me it’s Drambo or BM3, which produces little to no sync issues between apps and/or modular.

Hmmmmmmm, that’s interesting. I’ve been using MLS because it also sends MIDI clock to the modular via my Presonus Studio 1810c and CV.OCD. So Drambo, AUM or Loopy Pro could be lead clock and send out to my hardware instead? BTW @DatGood … I checked thru some of your IG and enjoyed the different musical treatments and variety of configurations of apps and hardware. Very inspiring, I’m trying to challenge myself and keep mixing it up, coming across different combos all the time.
Here’s a show I do linking up with some of my favorite music makers, syncing up our systems and improvising:

OK! I just found the send MIDI clock option in AUM. Let’s see if that has any general tightening up overall. I didn’t realize it was in the little 3 dot menu in the tempo pull down menu under clock options.

Lol. Honestly I delayed replying because I was confused to why you didn’t just use AUM as master. That led me to really investigating if the Presonus + CVOCD could have any impact on internal iOS sync.
But yes, AUM and its hidden gems. One caveat is that AUM doesn’t do sync-in. We’ve begged the dev for years but he says it’s tricky and doesn’t want to do a botched job until he does it all right. So it’s something to think about if you wanna sync from another app or from hardware to iOS. That’s where MLS may [huge emphasis on MAY] send a solid clock TO apps.
The other option… instead of AUM use AUDIOBUS. It’s kinda like switching from a manual to an automatic transmission car.

Thanks, I was originally using MLS because my first entry into integrating ios into modular was the other way around. I had this crazy way of generating rhythms using a Pittsburgh Modular Generator X module that had NO WAY of syncing to external clock, so I was pulling clock from the Gen X module, sending clock to Erica MIDI<>Clock in the clock to MIDI mode, to MLS to AUM.
Crazy I know, but it was the only way. After I found new ways of getting into that kind of rhythmic territory, I just kept on using MLS.
But this seems like a pretty cool way of getting it going and I’m discovering more cool MIDI generative methods in the ios world and learning to make better use of them.
Any experience using Polyphase? Looks interesting, with some cool random options.

Glad to know you are discovering via iOS. My current discovery is in reverse; iOS to hardware [eurorack].
Re: Polyphase, I got it years ago but I haven’t given it enough time. I never got around to properly learning it, but there’s this brilliant YouTube walkthrough… 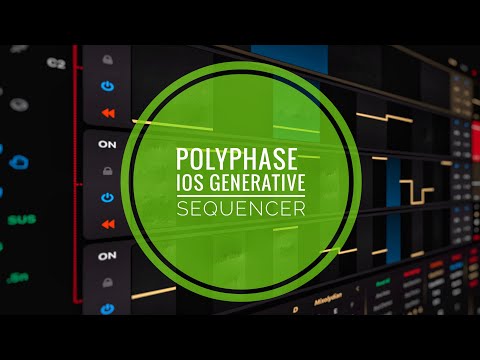 Thanks, I watched some of that video last night and bought the app. Played around for about and hour and was partly confused by some of it’s functionally and features. Also there’s a bug where when I select key and scale, that menu gets stuck open. (Nevermind, you have to re-press the selection button) I’ll watch the video all the way thru this time. The manual is actually pretty confusing.