Can anyone run the monome 256 using libmonome using just a c script. In the past with help, I’ve managed to see on the command line the monome has been connected but I cant get any further. I need to know if someone can do a step by step, how to get button presses, lights blinking ect using libmonome I pressume but with just a c file execution please.

I just tried to build libmonome and ran into a liblo not found issue, in spite of the fact that liblo is installed.

I threw a hail mary over to the homebrew folks:

@wrl any advice for us?

It builds on my computer just fine.

I commented on your GitHub issue, but I’ll repeat here… can you try installing the Xcode command line tools?

Run the following on a command line.

lib/include paths on OSX are weird. try alesaccoia’s suggestion and, if that doesn’t work, pastebin me the build/config.log please.

So, that worked for installing the library using homebrew, but I’m still having trouble building examples/test.c

First I ran the LIBRARY_PATH command from @alesaccola. Then I ran gcc -o test examples/test.c, which resulted in

Ah, thank you. That built. No lights on the monome yet though.

Hopefully you’re going with this. Been using libmonome a long minute for all my LED and button-press needs.

No, not going. As I said in my previous comment, successful build but no lights.

OP requested somebody write a step-by-step. I’d appreciate that too!

So when I run the command ./ configure inside the libmonome directory I get: The configuration failed.

When I ran
gcc -o test examples/test.c -I/usr/local/include -L/usr/local/lib -lmonome the compiler didnt complain but nothing seemed to happen after…

That gcc command creates an executable file named “test” that you should run.

No luck it runs for a minute no responce when a buttons pressed then the program terminates. I tried Tinyosc from here: https://github.com/mhroth/tinyosc but no result.

Almost I recovers a post I made earlier in the year “Monome RPI2” where I had help running monome on the RPI but couldnt get a c programe running with that. I havent any of it that also works on mac… heres the link: http://llllllll.co/t/monome-rpi-2/2006

Has anyone successfully run the monome off c alone? If so please share how you managed it, the much needed help will be appreciated. Ive compiled libmonome on the pi top, but not sure where I can go from there. The mac doesn’t yet compile as you can see from this photo. (not sure how to resolve that yet) 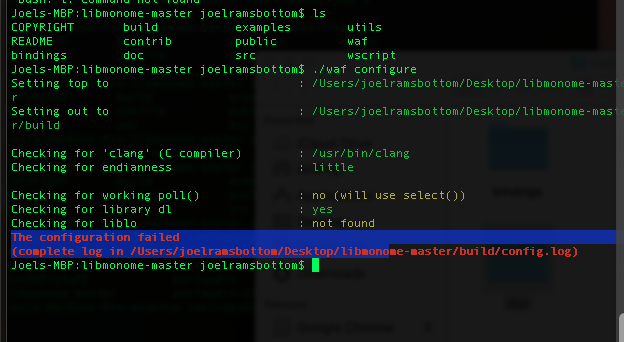 I just noticed that there is a homebrew recipe, might be helpful.
http://brewformulas.org/Libmonome

if you also don’t need osc in libmonome, you can do ./waf configure --disable-osc

Talk about a necrobump! I think this is the right topic, though.
I’m able to address the LEDs of my Arc just fine, but the encoder delta callback doesn’t appear to be working. Any thoughts would be appreciated here.
consolidating relevant lines of code, here’s what I have:

edit: Solution: I was missing monome_event_loop(arc);

also reviving libmonome c programming. its very fun and its so great that libmonome works seamlessly on so many platforms

I’m currently using it with Bela.

here is my code in context (I’m using the grid with bela).

do I need to do something to my code to get the varibright to work on a button basis? or do I need a compilation flag to enable it?