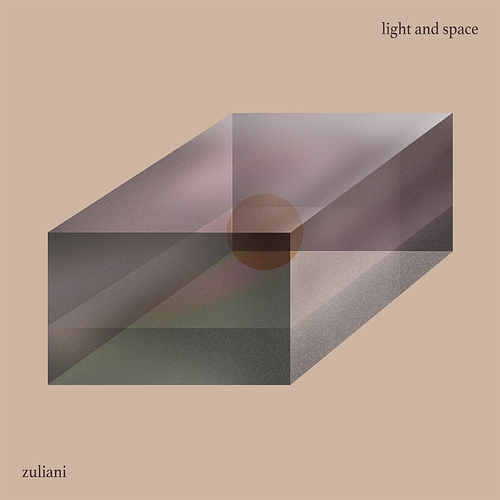 I’m releasing my new ambient album, light and space, a little bit early. I’m cooped up, you’re cooped up, maybe this will help. If nothing else, focusing on getting this done and out has been very healing for me — I hope it can bring these vibes to you, too!

It’s inspired by the 60’s LA-based sculpture movement of the same name, and is made of glowing sine waves, repeating patterns and gentle textures. Soft sounds for hard times, to hang out with you and keep you company at home.

Super happy to discuss patching and all that, if anyone is interested; all five of the tracks were one-take live recordings of a single, pretty compact modular system. At the time, I was living in upstate NY; now I’m on the west coast of Canada. Feels very strange to be releasing an album that was so much the result of movement, in these times.

I’m planning on releasing this on cassette soon, but lockdown has slowed this timeline a bit.

Thank you for listening!

Hey, thank you so much!!

Oh, thank you so much!

These songs are quite beautiful! If you’re willing to discuss, I am curious about how you patched it all together/the dynamics of your compact modular system. Especially for “cloud box.” Still planning on a cassette release?

Hey, thank you so much!! It was an earlier incarnation of my modular synth — I had to sell off the majority of the modules I used for these tracks in order to make rent last summer 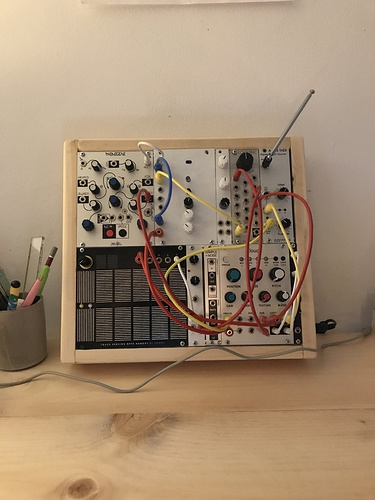 This is the setup for light and space; I remember what was going on in most of the tracks, but especially “cloud box”

I had a sample in the Phonogene whose sections were being scanned through by a very slow LFO, with the output from that run through Clouds at around 50% dry/wet; the sort of woodwind-like tones you hear above the main sampled melody are Clouds granulating the Phonogene’s output with the texture set all the way to “slippery,” and the pitch being changed by the TSNM running on sequencer mode and clocked by the “slice out” pulse of the Phonogene.

Not pictured here is a little Pocket Operator, the drum one, which is being clocked by the Phonogene as well; it’s a nice irregular clock, so the drums are kind of going in and out of sync. The drum track is split, with one signal going through the hacked Monotron Delay that is behind the big white plastic panel in the picture; this effected signal is being panned and scanned by the Cold Mac, which itself is modulated by the same LFO which is moving through the Phonogene slices.

I think that’s more or less it! At one point I took over the sequencing on the TSNM and did some manual noodling, which is that synth line at the end; everything else was completely automated and generative.

And then I moved across the country, became very broke, and sold the Phonogene, the TSNM, and the Cold Mac; so the patch for “cloud box” feels especially poignant and unrepeatable in a site- and time-specific way. Thanks for the trip!

Oh, and, yes! I’m planning a cassette release for the fall; I had to put L&S on the backburner to work on a twenty-four ambient album that I received some grant money for, but I aim to have a physical release for light and space before I put out the new work.

lovely stuff and cool to read about your process above.

Really enjoying this. I’m in for a tape!

What are the other blank panel modules in the case? Also what was the orignal sound source for your melodic elements on Phonogene, given there’s no obvious voice in the case?

I’m also curious what you recall about Violet Wedge.

I love this record and I look forward to the cassette when it comes out! Thanks for sharing those details about cloud box.

Hey, thank you so much!! I’ll be doing the cassette release in / for October, hopefully. I’ll update this thread when it’s happening!