I have downloaded all of the sets that I could find that was saved, but the collection is not complete. Should I still make a recap in the style of V1.0, even if it is not a complete collection? And is anyone not that keen on having their performance preserved forever(absolutely nothing wrong with that).

I have been thinking about V3.0, and I was hoping that I could make it happen in July, but the next 3-4 weeks have filled up with all sorts of vacation stuff etc. and the baby is starting daycare early August, so I’m thinking(unless anyone else wants to host) that we do V3.0 sometime mid/late August?

This has disappeared from Twitch - have you somehow saved it, and would you mind sharing? Thank you.

@noiserock has announced that unfortunately he is dealing with some personal stuff which means he cannot host in awhile. I’ve taken it upon myself to host this month’s stream, which I’ve decided is going to happen on Saturday, August 22nd.

I’ve added a new page in the document for signups this month, here is another link to signing up again: https://docs.google.com/spreadsheets/d/1BVK0Pee-Syoh1aPyWNrVKqMFPC5QVTjRe4nsSUesIKM/edit?usp=sharing

There is a channel for suggesting themes in the Discord which has had three suggestions so far, enough to make a poll. I’m making this post into a poll for the themes that have been suggested so far:

All the themes sound interesting albeit it is summer here and I often spent summers by the sea so topic was obvious to me. I added myself to the list (so the more shy people won’t be afraid of being the first and single person on list :P) but I have played on the first stream so I can always free the slot if someone haven’t played before and all the slots are taken.

Put me down for, “I’d love to play again but want others to get a chance to sign up first.”

shall i turn this into a new thread? more visibility?

if additional slots are needed on the tail end, I may be able to pick up later hosting duties. haven’t hosted before, so not certain what’s involved on the Twitch side.

hope everything is okay with @noiserock!

Happy to help with any artwork if needed!

@karol @tyleretters I added a column so people can specify which stream they last participated in. This way people can sign up without necessarily feeling bad about taking someone else’s spot. I figured people who played in the first stream played a pretty long time ago by now so they still get some priority over those who played last stream.

@tehn I think this is a good idea. This thread could then serve as a meta thread with all the information that would make the specific per-stream difficult to navigate and intimidating to newcomers.

@Gexex I think switching who is logged into the account while streaming sounds like it may be a bit fiddly and I’m worried something might go wrong. The act of hosting in and of itself is very simple, you just type a command in Twitch and it hosts. Any help is appreciated though and people are free to add times later than the ones I put in the document (I only copied times from the last stream) and we’ll figure out how to make it work.

@samarobryn Artwork would be great!

Bump - just signed up for a slot. Looking forward to it!

I signed up but also, if someone wants that slot and hasn’t played a community stream please delete me and take the slot. I made a note as such in the spreadsheet as well. Thanks for organizing!

no need to worry, I just need to focus on home/work life for a bit. hopefully I am able to follow along. many thanks to @oot for stepping in. 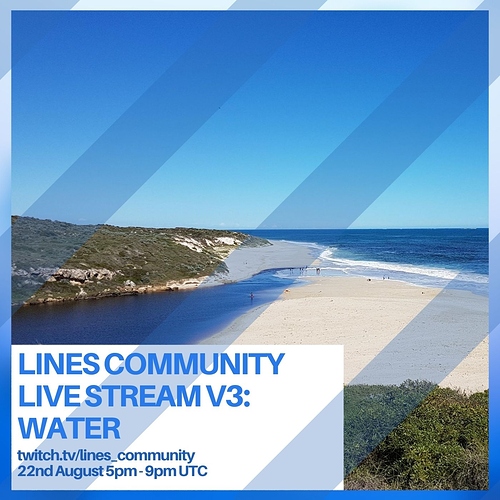 I forgot to mention it in this thread but here is the new thread for this particular stream: 3rd Lines Community Stream Saturday 22nd of August, Theme: Water 🌊

Two threads with the same title is unnecessarily confusing, can we switch this one back to 2.0?

Sorry. Changed the thread title. Will clean up more soon.

Posting here as perhaps some people will otherwise miss it.

The third stream is now live!

Dear mods, can you make the top post a wiki? Would love it if this could be a resource for future hosts/participants of the stream.

it is done, now a wiki

icymi next stream is this saturday: > flash crash: saturday at 12:30 PDT!