As you can glimpse from reading posts in this very thread, a lot of people don’t find it so “strange”, or “crazy” or “bizarre” so it’s maybe not the best vocabulary to describe the situation.

Strange isn’t necessarily bad if they meant it in the “hard to understand” sense. A lot of those words come across as an emphasized version of “different” and I’d think most of us are cool with different.

There a lot of companies that don’t have official forums. I didn’t see anything saying news, scripts and updates were off limits. How will this effect you? Not being sarcastic at all. I’m genuinely interested in how it will be different.

the monome forum ended before lines even existed.

from another thread several years ago:

lines grew out of the monome forum, as an effort to encompass broader creative practice and not just host a “product forum” which is not the spirit of monome to begin with.

@milkweed.reflections Honestly, it sounds that aside from trade being removed nothing is different except for true support help I.e., “my norns won’t turn on” and availability announcements for actual hardware.

to be fair, nothing has changed. we just loudly announced things we were already doing.

my personal opinion is that the easiest way to operate a forum is to confine its scope of activities.

I need to give a belated “thanks” for a quick, thoughtful, and clarifying answer to a thorny question. Thanks! It also makes a lot of sense to me, and I hadn’t really considered this perspective until you laid it out.

“The granularity of bones in a body. A forest with galaxies of moss.” — Sneha Subramanian Kanta, Ghost Tracks

(this comment is at no persons in particular. it is the result of sitting with the changes and listening to everyone’s thoughts for a few (10 (tehn, lol)) days.)

i think it is safe to say if you’re following this particular thread, just reading lines on any sort of regular basis, or even posting here: you care a great deal about this place.

and we all care about it for different reasons. many of these probably overlap. i was sad to see the trade category go because trading here felt like something approaching how i’d like commerce to work everywhere else. no middlefolk, no hidden fees, no scams. but — surprise! — there were middlefolk (the mods), there were hidden fees (their labor and server costs), there were scams! it was an illusion and i’m happier to know santa isn’t real. this place is only as magic* as we allow it to be. all my trade experiences were great and i’ll miss this being my primary channel for moving HOT CYBERDECK GEAR, and i can still support the decision to eliminate it.

asking users for money to cover costs is also the right decision. no altruistic** project like lines should ever operate at a loss. (i may even be so bold as to suggest a $1 annual fee.)

i’ve heard it echoed time and time again. “lines is a special place.” you probably have, too. i’ve got several reams of theories i could share as to why this is the case, but they don’t matter because lines is at its best when you let it be. to let the world be. to let the moss grow. 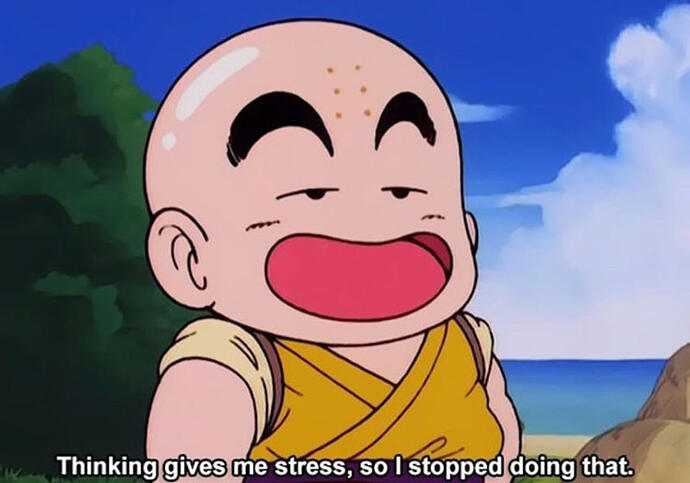 yea, i scratched my head a bit about the new data that i, as a community member, now “own” part of lines. like a stock? or a vote? but thats only half the brain thinking. the other half, the ape half, or maybe the intuitive half, thought, “huh, that’s neat. i kinda always felt a little bit of that, even since my first posts before i knew anyone… cool i wanna go make some art instead of thinking about this too much…” and even if i did have something as abstract as a vote to burn, i’d vote to just keep things as they are. don’t futz with it too much. don’t poke it more than ya have to, ya know. removing trade and going to community funded is a huge poke. let’s not poke 'til maybe january 2024?

lines isn’t a forum.
lines is a mindset.

lines isn’t a neo-hipster reverb.
lines is a humming forest clearing beneath some power lines and a great blue heron.

lines isn’t a product.
lines is a better future in the process of becoming itself.

to let the world be.

“There is an ancient conversation going on between mosses and rocks, poetry to be sure. About light and shadow and the drift of continents. This is what has been called the dialect of moss on stone - an interface of immensity and minute ness, of past and present, softness and hardness, stillness and vibrancy, yin and yan.” — Robin Wall Kimmerer, Gathering Moss: A Natural and Cultural History of Mosses

This is the first time I’ve ever noticed that my Norns and Grid don’t have logos on them. Thankyou for pointing it out!

To celebrate this wisdom, an observation…

Lines rarely proclaims itself to be a sangha, a zendo, but it partakes of the qualities of these, every so often someone mentions it mostly in passing…

Among all the music and the tech and the ars and the techne, all of which are themselves amazing motivating reasons to spend time here, the quality that keeps me here most of all is the kindness that emerges between the beings who populate this mossy forest. This feels rare and precious, but also feels like the way it should be everywhere, and by its very existence calls the rest of the world’s ways into question.

As is the case with such things, it’s usually best to simply let them be what they are, but being humans with these strange brains, we love to analyze and tinker, and these things will happen, as is the case in the present moment.

I trust that tinkering with kindness and wisdom will evolve us In positive directions, even if it’s a bit confusing or uncomfortable for some on occasion.

Anyway, good morning friends! Thank you all for the kindness and care you are all sharing!

I’m cool with a fee. If it felt like I had a voice that wasn’t lost in the shuffle I’d exhale up a little more. Give me a super cool sticker, though. What I’m saying is the second we started paying for this forum is it became a product. Are we the product?

Is lines big now? Is it too big? Who makes the decisions for us around here?

Pigs in a pigpen… but the good news is I find Shoshone arrowheads here all the time.

Has anybody’s GAS reduced since the trade section faded away ?

I’m liking the decision and fully supportive of the choices.

Would love a lines hoodie

Has anybody’s GAS reduced since the trade section faded away ?

Sadly no. But I am pleased to know it’s less of a burden on the mods.

`It’s tough for me too

I actually understand and feel exactly that way: I joined lines long before having a grid and/or norns and stayed for years just exploring the community topics (specially the more conceptual and esoteric ones) and learning. Quickly I found that in the past a monome forum existed and lines is another thing, aesthetically, philosophically and socially related to monome but definitely not “offical”.

I never, ever, clicked in a trade thread (because I live far away from most people that are in the forum).

So we now have a clearer conceptual frame, but I really feel that basically nothing changed.

This is the first time I’ve ever noticed that my Norns and Grid don’t have logos on them. Thankyou for pointing it out!

Teletype and Ansible both bear the Monome logo/typeface, albeit in a very understated way.

regarding commercial activity, this is a nuanced conversation we’ve been having for years— it seems a good time to break off and start a new Meta thread so we can all figure out some guidelines

I’d definitely like to contribute to such discussions coming from an open-source design corner WRT sharing my projects on here and allowing people to communally obtain the PCBs and whatnot, especially as anyone getting PCBs manufactured will inevitably end up with a bunch of spares that could be passed on to other members. As I’m sure you’re aware, PCB manufacturing isn’t the most ecologically-friendly thing in the world, and reducing the amount of waste (I think I have about 100+ “useless” boards from prototyping etc) would be extremely welcome.

@tehn If I may make a suggestion, I’d like either yourself or one of the mods to create said thread for the discussion. It simply seems too weighty a topic for a non-official member to create.

I can say I’m sad to see it go as it was a great place to B/S/T monome specific gear.

I do, however, respect and support the decision in terms of mental health and free time of the management team.

i’m glad i finally had the time to catch up on this thread. just wanted to say i’m totally behind all the changes, and put into words my appreciation for all the work and vibes mods and user alike put in to creating lines. looking forward to see what will come from this new direction. now it’s time to sleep. good night all people on lines, see you tomorrow!

I hope this place changes as little as possible, except that yeah there should be a lines hoodie.

Thanks for all you do, mods.

I agree completely. This is the only music making related website I frequent. I don’t post much, but I read nearly everything that others do. I’m supremely grateful to everyone that makes this place what it is and I just want it to continue. Also, make it a zip up hoodie and I’m in.