We (Isn’tses) are putting on this gig in East London soon, exciting lineup of soundart, noise, drone and performance art at a really cool psychedelic/occult bar. Would be great to see any of you there. 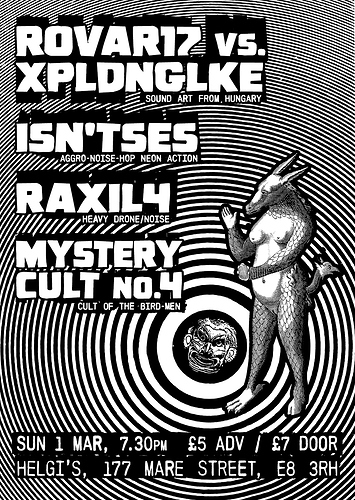 ROVAR17 vs. XPLDNGLKE
A collaboration between two prolific Hungarian sound artists, playing as part of their UK tour. The industrial noise warlock Rovar17 and the rhythmic hermit XPLDNGLKE. Together the duo creates soundscapes that exists somewhere between catatonic phantom noises and stimulating beats.
It’s all an eternal struggle for the control over the mixer, or just infinite loops of the secular idleness at the first morning after lobotomy.
https://havizaj.bandcamp.com/album/miracles-of-orbanistan https://soundcloud.com/rovar17vsxpldnglke https://www.youtube.com/watch?v=qsp-Z6UEG0o

raxil4
Multi disciplinary sound artist who specialises in analogue electronic dronescapes, acoustic audio phenomenon and installation, he is active on the London sound art, improv and noise scenes. He has performed live all over Europe and the UK, many of his performances have been in non traditional venues, often choosing to play spaces with character and interesting acoustic qualities, such as caves, churches, crypts, prison cells, psychiatric hospitals & water towers. He has also performed live and installed durational works in galleries such as Tate Modern (London), The Barbican (London), The Arnolfini (Bristol), M-HKA (Antwerp), Sonnestube (Lugano), Soundfjord (London) & GV Art (London). His works have been broadcast on radio stations internationally.
http://raxil4.bandcamp.com/

MYSTERY CULT NO. 4
THE BIRD-MEN CULT OF THE EAST

They came in boats from the islands of the east
Dreams conceived; voices and visions reached!
Banished and recorded, imagined and released,
In childlike union of body and beast,
We challenged ourselves in adventurous addiction,
Clenched fists; eyes focused -
although the destination was not mentioned!
Drumming and beating, our waves, hearts, and wings
Spiralling to heaven, our egg laden king.

MYSTERY CULT explores the history and inner workings of various initiation ritual groups from Graeco-Roman Mystery Cults to other shamanic practices across the world.

Music event in London, United Kingdom by Isn'tses and 4 others on Sunday, March 1 2020 with 119 people interested.6 posts in the discussion.

Nice line-up. Shame I won’t be in London then as it’d be just the ticket.

try my best to make this…

Cool, hope you can