The invite link seems to have expired. Might be worth making a new one? I think you can set it to never expire

is the lines community server no longer active? i’d prefer that one continue rather than a new one be started.

The lines community stream server seems to be working fine for me.
The other one doesn’t work indeed.

eidt: It’s a bit sad that we have to rely on all these datamining, corporate-owned platforms, which always seem to me in stark contrast with the monome ethos and generally with the sensibilities of this community.

This was discussed somewhat elsewhere, but I would love to see a Monome/Lines Matrix room or community. It’s not perfect, especially since most of the clients available at the moment don’t provide a seamless experience for attaching audio files, but I use it a lot without much trouble.

Could setting up a mattermost work/soften that aspect? Or is it a bit cumbersome? I know it lacks the audio discussion features of Discord but I don’t think we use those that much in the Live Community discord anyway.

Just for the sake of completeness / cross pollination, just a reminder that there is also the norns study group which is hosted on discord.

Most of the action is set in live video events scheduled every week, but there is also some regular chit chat.

A better presentation + invites can be found on the norns.community wiki:

I think I saw some comment later on referring to it as “a failure” (can’t recall who said that) so I don’t know how active it is or if it got shut down however.

I think it’s useful for organizing things on the fly but my experience having actual conversations on there is that the appeal to me about this community is the higher than average level of conversation that goes on. The point of Discord and other chat apps is kind of the opposite; to make casual conversations where you’re shooting from the hip.
I don’t want to say that anyone’s behaved immaturely on the server because the absolute opposite is true but when people made mature, insightful conversations then it felt to me like those conversations could have just been had on this forum where they’d been useful to more people.

That’s just my personal experience of it.

Not sure why, there were aspects that had potential, like being able to have real time video chats…

I never used it because I couldn’t seem to find anything other than the video chat. It was my first experience with the platform, so my challenges navigating it are on me, but I didn’t find it intuitive and, since this place exists, I didn’t expend the effort to figure it out.

but it needs more participation to keep it going.
and it’s not just for video chat, we had quite a bit of sharing screenshots of live-coding in various environs so ideas were exchanged fairly quickly… and it was a cool fast/real-time version of Lines in many ways, people even started sharing pics of mushrooms on one of the first days, hahahaha - i remember my favorite quote was from Zifor that day, “lay the mycelia network”:

i also spontaneously learned Hydra in one day thanks to users ‘Dianus’ and ‘Zifor’: 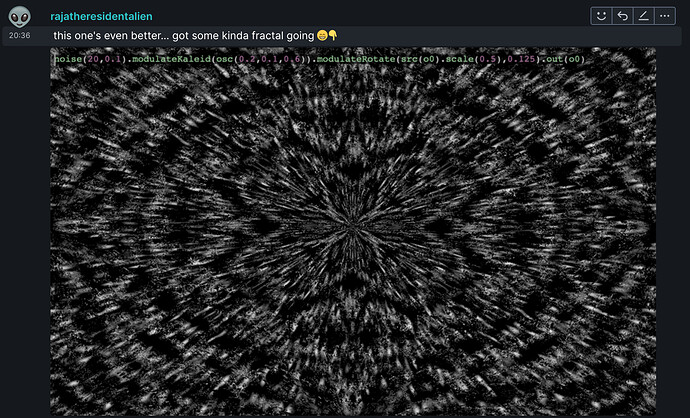 i tend towards Discord, because i’m already on so many others there
but there’s some drawbacks to both Discord and Matrix/Element - on Discord you need to keep boosting, otherwise, there’s limitations to server space(didn’t seem that way on Element - at the same time, there’s quite a bit you can do without boosting at all - there’s a MaxMSP discord i’m on, too, never gets any boosts, still can share quite a bit of video, etc.), while on Element, one annoying thing is that it always asks you to verify your identity and most of us just skip that part(not a huge deal, just create an encryption key of some kind, but still… was an unnecessary step for many)

…like before, you’ll probably get participation at first, and then it’ll fizzle, we just need to stay focused on these two)

p.s. edit: for anyone on discord also looking for more general electronic-music/multimedia related chat(software hardware and sometimes even video, plus ability to partake in compilation releases), i highly recommend EZBot’s discord:

(much like Lines, many people from Lines are there in fact, it’s the most active chat i’ve ever participated in on Discord that isn’t about gaming, and it has a really fun party-kinda vibe: people get rowdy in the yelling channel, and there’s much hilarity and fun there in all other channels as well - awesome talented minds there)

I’m sorry I missed out on this initially! I’m definitely going to be hanging out there in the future.

Yeah, to be clear about this, this only matters if you are using Matrix’s encryption features. I do use them, they’re very easy to use, and the entire effort there is keeping track of a little bit of text (like a second password). I have it saved in my password manager and enter it whenever I would sign in to Matrix on a device I own. That way, I can participate in unencrypted chats on any device, but my private, encrypted communications are not present on, say, a borrowed computer or my company phone. You can also use the cross-session verification features if you don’t want to keep track of the encryption key; that’s what the popup is.

That way, I can participate in unencrypted chats on any device, but my private, encrypted communications are not present on, say, a borrowed computer or my company phone. You can also use the cross-session verification features if you don’t want to keep track of the encryption key; that’s what the popup is.

ahhh, i get it now(thanks for explaining, i was indeed confused: i guess i’m old-school paranoid → i only trust my home laptop for text-based communication - i also created a key long ago but then forgot it

My guess is that the most useful way to use the Matrix for me would be to schedule, in advance, specific times to meet up with people there.

Random drop by visits revealed no one there, which very quickly became a disincentive to visit…

I also have a Zoom account which I have used for some hangs with some of my Lines friends, so I’m not hurting for ways to vid chat…

Maybe someone would like to set up a periodic meeting time? Then anyone who wanted to join could do so…

Certainly this is a great idea for the video chat! I mostly use matrix as an IM solution, though.

I think we need a Norns script that lets us chat. Text or maybe even audio. Just spitballing with no idea how to do so.

The Matrix community is working on Spaces (now in beta), which are (among other things) Discord-like communities. Spaces: The next frontier

One option would be a Matrix or Dischord client written in Lua as a Norns app. Would be pretty involved I imagine but cool.

I’d love to do something like this! I don’t know what yall have in mind. But I’m imagining a sort of collective journal. Gather different peoples stories and experiences about certain topics.
For example, I’m currently a new dad. Hearing others experiences with something like that and then sampling it over a norns script like cheat codes, barcode or something.
But I’m probably venturing off topic here.