Just throwing this idea out here. A radio stream of music made by lines members + music liked by lines members. Could be a totally random thing or curated shows more like what dublab does (only then on a much smaller scale offcourse).

@hecanjog started a great radio station (you can listen at radio.computer ) and may have some insight here on the nuts & bolts.

Derp, I guess I should crawl out of my lurker corner…

This is great timing, we’re trying to expand the schedule at the moment. Maybe a weekly show, with a different DJ every week?

Our schedule is pretty open still, the majority of our shows happen at the studio here in Milwaukee, but we have some pre-recorded remote shows (like Gregory Taylor’s excellent Moonwater program) as well as some remote-but-live shows (like Kendra Amalie’s improvisational 70rugs program which she does from her home studio) which take over the main stream.

Our station manager knows more of the nuts and bolts of the setup (i just manage the schedule & do a show, he set everything up / maintains the stream / builds the gizmos etc) but we’re running an icecast server on a linode instance, and the studio computer or the remote override just connect to it via BUTT or anything that can connect to an icecast server (like Mixxx) – and there’s some layer in there with liquidsoap acting as a fallback for when the power goes out or zombies attack etc…

Anyway please get in touch if you’re interested in doing a show, we’re currently expanding the schedule! erik@hecanjog.com

(Ironically we had an issue with the linode server recently, but it’s back up! Rickety rickety always reliable radio.computer)

I’d love to participate, but I currently live in London. So I guess for live stuff I would be on a quite different schedule (which might be a good thing?). I did radio stuff when I was in Belgium and I quite miss it!

Hi @electret and @xexyz – awesome! Could you send me an email to erik@hecanjog.com when you can with this info?

Here’s the current schedule with insultingly brief and inaccurate summaries of what they do (including shows that are slated to begin later, times in US central / Chicago time):

Saturdays
10am-1pm Sparetire Radio with DJ Sparetire (this is our music director’s show and maybe the hardest to pin down genre-wise… he likes to change it up.)
1-2pm Dogpatch with Dante & Kirby (crate diggers delight - obscure record theme shows)

Sundays
11am - 1pm Dust Edition with He Can Jog (I play computer music and other stuff)
1pm - 3pm Full Spectrum label feature with various DJs (starting in January the folks at Full Spectrum are taking turns doing episodes – actual program title TBA…)
10pm-1:30am Natural Resource live from Cactus Club (guest DJs remote stream from the Cactus Club in Milwaukee hosted by the Close up of the Serene folks)

(Also Bernhard Günter will be hosting a live performance feature + roundtable discussion but we haven’t locked down a timeslot yet.)

Also @xexyz since you’re local if you’d like to do your show from our studio in bay view we can talk about that! There are some turntables, a CD-j (it’s a little janky but I use it a lot) and a single nakamichi tape deck plus the studio computer and of course aux inputs for your gear. We have a broadcast mixer that’s being fixed up, but it’s not in service yet… just cramming everything into a standard mackie for now. 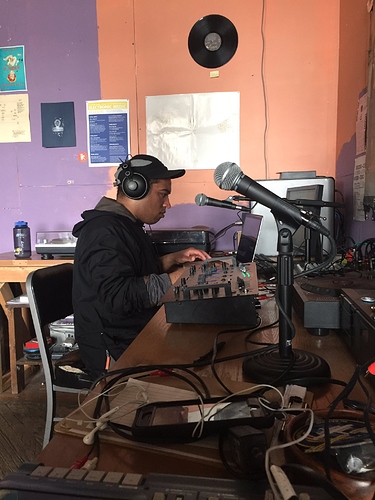 (Not pictured: our lava lamp & giant Fleetwood Mac poster, because it’s a radio station after all.)

Sorry for hijacking this thread @nuun …

I guess I should point out that we already have three techno shows on the schedule – and nothing at all against techno – but we’re looking to keep the programming diverse, so at the moment non-techno shows are especially of interest! Thanks!

No problem at all hijacking the thread! I’m also very interested to doing a show. I live in the Netherlands. My personal music taste is very broad, but no techno for me

I will send you an email this weekend.

@lettersonsounds Oh and to get an idea of what music I’m into, i made a couple of 1 hour mixes awhile back and put them on mixcloud:

to speak to the original topic, i’d be interested in supporting a lines netradio stream if we could get enough volunteer programming. i suspect we don’t have enough dedicated people to host shows yet-- but some day, perhaps soon. and we’d need someone to passionately lead the endeavor.

that’s great! i’m totally in to host a show. i don’t know if i’m the right person to lead the endeavor… unfortunately i’ve not the technical know how to built a netradio stream.

like all radio, it’s relatively easy to set up, and then requires quite some dedication to keep running.
For a community effort that’ll possibly be curated by multiple persons yet be able to run by itself unattended smoothly i’d say a mix of liquidsoap + some web frontend made on the spot to cater needs would be a flexible enough tool. (but sorry, not volunteering for this, i have enough on my plate.)