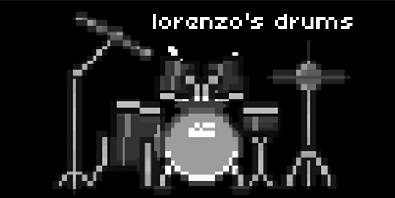 this is a norns script that allows you to manipulate a high-quality drumset composed of many meticulously captured samples from Lorenzo Wood (shared through www.pianobook.co.uk). each drum hit is composed of ~6 samples which are mixed according to the current mic positions (up to three positions) and velocity (interpolated between two velocities of up to eight layers).

the first time you start you will have to wait for samples to download. once done you can goto PARAMS > choose pattern and choose a pattern. then hit PARAMS> load pattern. then goto the main screen and press K1+K3 to start the pattern. 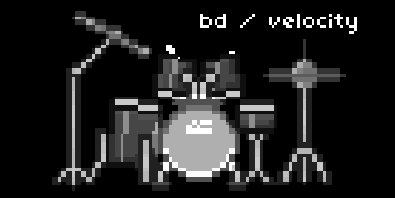 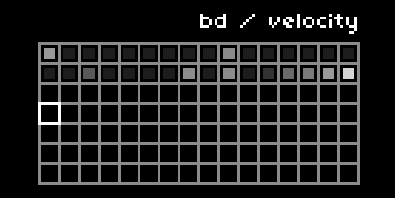 at the heart of lorenzo’s drums are nine drum pieces (kick, snare, cross-stick, closed hat, open hat, ride, low tom, mid tom, and high tom). each drum set piece has parameters that can be modulated by individual step sequences - including velocity, pan, rate, reverse, probability. each of these parameters are modulated by increasing the value of a step in its step sequencer. each parameter has its own sequencer. each instrument has its own clock division and its own swing.

for now - please refer to this tutorial video:

midi output and input is supported. midi output is sent per channel, each instrument on its own channel (1-9). midi input by default is note based but can be changed in the settings. instrument triggers can also be midi-mapped so you can use a midi controller instead of a keyboard.

you can record quantized notes onto any track. enter recording mode by toggling PARAMS > record, or by going into “ERASE/REC” mode on the grid by making the last two buttons dim.

you can actually compose patterns in a text editor instead of using the grid/norns. simply edit this file in maiden or your favorite editor. follow the patterns in that file for naming/syntax. those patterns will be available to select and load from the PARAMS menu.

this isn’t the final script I envisioned. but its fun to use, and I thought I’d share this iterations so that you might have some fun using it too. in the future I’d like to…

is it possible to use other samples?

it is possible, but you’d have to make this change yourself in the engine code. the filenames for each sample of each instrument are hard-coded. the files exist in folders according to their mic position (“hat”, “snare”, and “kick” microphones), where each sample has the same name for each mic position. then the code has a matrix for each instrument, where the round-robin sample is specified in each column and each velocity layer in the row of the matrices in the engine - for example see the assignment of kick samples.

once you run for the first time it will automatically download the samples (requires 200 MB of disk space).

ughhhh what a prince, what a wizard. i love how openly you’ve given hooks for expansion, and i love how as a self-contained unit you’ve found yet another way to bring the ‘outside world’ into this ecosystem — such a rad mindset and execution

Again! You are incredible!

Looks amazing! Keep getting load fail on my norns shield tho. Any others? EDIT: fixed now! all is well

Can you open maiden while you load and see if it says anything? Also did you restart after installing?

EDIT: my bad - I put the name in the maiden library as “lorenzo’s drums” (with the apostrophe) which the file system didn’t like. if you installed from library viewer in maiden it won’t work. I just sent a PR to update the library, until then it should work if you instead install from REPL in maiden. click the “matron” tab and type this in and press enter:

Re-downloaded from library, works perfectly now! Thanks! such a fun script!

Looks so amazing. Unfortunately I’m getting behavior where the playhead isn’t moving. Everything else seems to be working but when I hit K1 + K3 I get one hit but nothing else.

Unfortunately I’m getting behavior where the playhead isn’t moving.

is there any output in maiden when this happens?

got the script loaded and it ran the auto load for the samples.
it will make sounds but…it will not play the sequences.
ooop…i just saw someone has the same issue above.

as usual it is on MIDI clock but i tried using internal clock as well.

i’m still on the previous OS due to trying to avoid all the script issues and waiting a bit before updating.

was wondering…
small feature request…it’s something that the Deluge does…could you add a Alt click of some sort for the grid that allows the user to select an instrument and it doesn’t trigger it’s sample?
this way one could switch sounds while its playing.

could you add a Alt click of some sort for the grid that allows the user to select an instrument and it doesn’t trigger it’s sample?
this way one could switch sounds while its playing.

This would be very much appreciated too.

Such a great script!

This is amazing! Thank you so much!

i’m still on the previous OS due to trying to avoid all the script issues and waiting a bit before updating.

yep I just fixed it - I bundled the new version of lattice so you don’t need to upgrade.

could you add a Alt click of some sort for the grid that allows the user to select an instrument and it doesn’t trigger it’s sample?

That was quick - nice one!

This was made only with the mutes on board nothing fancy, nice to see it doesn’t cut the audio for a sample already triggered.

Edit: got lucky that the last sample was reversed, the chances were 1/11 chef kiss

got lucky that the last sample was reversed, the chances were 1/11 chef kiss

its astounding! the whole piece really makes me smile, such a good sounding beat.

another way to bring the ‘outside world’ into this ecosystem

thanks Dan for the continually kind and inspiring notes.

Could you possibly elaborate further on the process for midi input mapping?
I’m trying to use my drumkat midi controller to play the individual samples and am sending note values 36-45 all on channel 10. I’ve confirmed the midi is getting to the norns using the midi monitor script.

Thank you for yet another awesome script!

Lorenzo’s Drums v0.2.0.pdf (443.4 KB)
Another cheat sheet for this most excellent script, thanks Zack, again let me know if
there are errors or omissions.

i would suggest RSYMB be labelled as RIDE.