When I was first getting into synthesizers, there was an uncompromising method that really caught my imagination. It was born in the electro-music forums, primarily, but had radiated out to a number of influences. That was the technique of percussionist Stanley Lunetta, and the concept was the application of cheap CMOS IC’s in the application of elecronic music.

To the initiated it’s an ascetic practice. How far can we take simply digital logic chips what kind of noise can we fully achieve. It’s a boundary I find endlessly fascinating since many artists like NLC, Lorre Mill, Ciat Lonbarde have produced beautiful instruments from within these constraints.

The electro music forum is a gold mine of inspiration of dynamic and resourceful thinking if you dig into it. I built an entire system primarily based around idea from Castle Rocktronics between 2014-2017.

Curious to hear more who have explored this territory. Those excited by CD40xx series chips. Lets talk about it!

Interesting stuff! Do you have any recordings of sounds you made with the Castle Rocktronics setup?

I was really into the Lunetta thing for a moment. I like creative constraints so the limitation factor and seeing how much is possible was really interesting, and the ability to run them at very low power was nice for installation ideas, but I never got very good at getting my head around all the chip functions and how to push them beyond their intended uses. I had started doing my own re-layout of the Castle Rocktronics projects and some other related things in a 100mm format for using with euro rails and bananas. I did a few layouts but got distracted by other things then and sorta dropped it. I did some breadboard stuff and built a few NANDulators in the stand alone layout that Wagtail did which was fun. Though I need to get some different IC’s - he had told me at one point that he found different brands actually behaved rather differently in the circuit, like some got hung up too easily and wouldn’t get as much variation. He was also (not sure if he is still pursuing it) working on his own ‘Lunetta format’ system- http://atelier-wagtail.org/

Finding interesting sounds I think can be trickier if you are using strictly logic ICs and can get kinda old - every week there is another ‘diy drone box synth’ that is basically a 4046 and a couple of knobs. Though as you mentioned there are for sure people doing more interesting work. After a bit I started looking more at stuff that also used opamps, like Tim Escobedo’s guitar pedal circuits, since it could integrate easier with other gear. but then, when you do get something new and interesting doing strictly logic based projects it certainly is rewarding. also while I think a lot of their stuff is actually tube based I’ve been a big fan of M.I.T.B/Bastard Noise and related projects for a long time and a lot of their electronics has a very similar sound with chirping and whirring and sort of tearing/squeeling sounds, so that also appealed to me a lot and its a good example of how those kinds of ‘limited’ sounds can still be used and pushed in diverse and interesting ways.

Those excited by CD40xx series chips

I have spent the past several months deep in a project with these incredible things…tweaks to the Ciat-Lonbarde Gerassic Organ circuit. Which at its core is an oscillator where the pitch is controlled by 8 outs on the 4067, where 3 buttons act as the switches (so it’s a binary keyboard).

After talking with my friend @brianleu about this project…he had sent me the datasheet to the 4028…which basically translates binary switches into a bunch of base-10 pulse outs.
Once I understood I could use that for lighting up some LEDs to tell what note was played, I started thinking about how to wire this together.

I had a big aha moment…this chips are basically like high-level programming where you can wire together very complex things pretty easily. A lot of the complicated (and at the time, absolutely impossible to understand) details are abstracted away. They are also designed in a way that can work directly with 9v batteries/wall warts unlike a lot of the micro-controller stuff around which is pretty sweet…you don’t have to worry as much about frying things. So yeah, love these chips! Gonna have to check out Lunetta…never heard of it before.

Another eurorack series based around CD40xx logic chips is the LZX Castle series of video synthesizer modules. These don’t quite form a complete video synthesis system on their own (you would need a sync generator and output encoder as well) but they have some really interesting applications and it can be a lot of fun to work entirely with these 3-4 bit workflows. These are designed for higher frequency signals but you could use them at audio rates as well or combine them with other logic chip based modules, though they do rescale the I/O to the 0-1V range used by the rest of LZX’s lineup. You could probably tweak some component values if you wanted different voltage levels and frequency ranges.

Cool topic! I’ve been finding myself slipping into this world too. It’s funny looking at that Castle Rocktronics site, because I’ve been thinking about adding a lot of the same circuits to a CMOS synth that I recently embarked on building. I love how forgiving they can be and how surprising they are.

Unfortunately I can’t find anything I recorded back in 2014, when I built my lunetta modular. I didn’t really record much at the time, but the sounds were something like what you get with the paper circuits. Manic beeping.

I did find a picture of what I built: 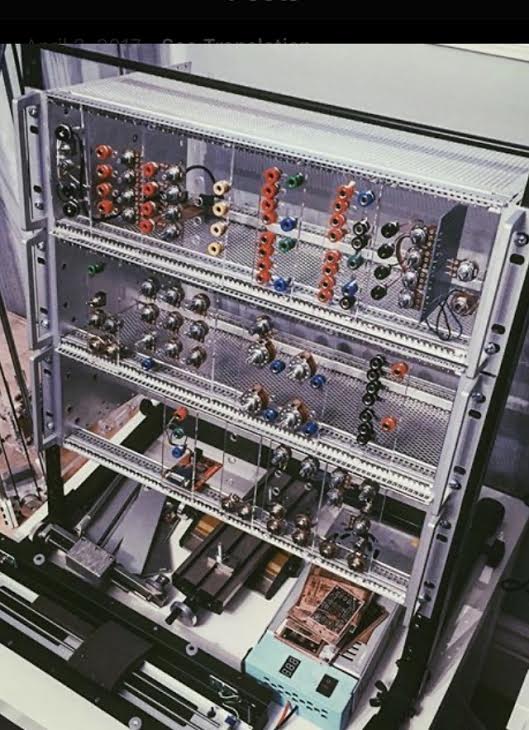 I think this is from 2015? I was in the process of changing everything I had built on tagboard to hand etch PCBs I made. I had the full Rocktronics setup on the top row, some additional CD4017 clock sources, PT2399 type effects, and a CHA/V on the bottom row for video.

I wanted to share a couple of more resources I just recalled: Logic Noise is an excellent introduction to Lunetta circuits. It’s a detailed walk through of building a CMOS based drum machine, and I cannot recommend it enough. Fun with Sea Moss is also a classic primer on CMOS synths. For more inspiration check out this schematic for the Wasp/Jasper which is a synth famous for using a lot of CDxx series chips.

Hope to inspire some more folks to try out this style of synthesizer! Unfortunately, activity died off sharply in the old Electro-Music forum. Like @jlmitch5 mentioned most of these circuits can run off of a 9v battery, which makes them pretty forgiving and simple for experimentation. I think getting into this requires a particular frame of mind. I remember at the time being much more interested in experimenting with logic gates than like producing any sort of music I wanted to record.

I keep remembering old websites I used to frequent (makes me want break out the breadboard again) Asher Ohm put together an amazing resource at dlb electronics they built a massive Lunetta modular and kindly included the schematics for each part. Bugbrand also had an excellent Lunetta modular design that you can still access through Archive.org

My introduction to these delightful little CMOS chips (and diy electronics in general!) came from Nic Collins’ excellent Handmade Electronic Music - The Art of Hardware Hacking.

It assumes basically no knowledge and has a very playful and results oriented approach to electronics.

Looks like there’s a new edition out that even has a chapter on paper circuits from Peter Blasser!

While not strictly about Lunetta, there’s a decent amount of overlap and I’d definitely recommend the book to anyone looking for a gentle introduction to audio electronics DIY

I love this book!! It’s what got me into building synthesizers. I first read it in 2013, I think, at the time I was building a lot of stomp boxes. Reading it I began to discover how things truly worked, I was mostly building from plans I found online. Amazing resource for beginners!

Most of my circuits never made it off the breadboard, but it’s so much fun to experiment with.

https://www.youtube.com/playlist?list=PLHeL0JWdJLvTuGCyC3qvx0RM39YvopVQN <- This is kind of lunetta in spirit, I’d say. Uses a 40106 as the oscilator.

I’ve got an ice cream tub full of 4000 series chips! Lunetta is what got me into synth DIY, although I soon got my head turned by Ciat-Lonbarde circuits, so I haven’t actually built much Lunetta stuff.
I agree with @slowsounds, you can get more interesting sounds if you incorporate op-amps and some other chips, like OTAs.
Here’s my breadboard or strip board layout of the Wasp filter. The input needs to be attenuated via a pot as it has an input gain of approx 4, to give some nice crunchy distortion pre filter! 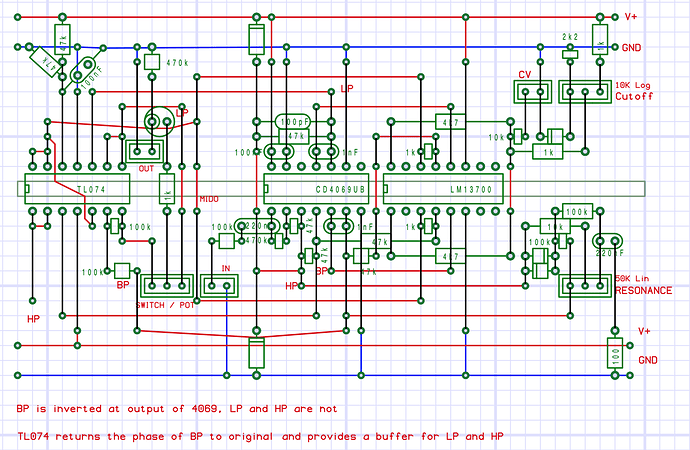 A random DuckDuckGo search turned up this Github repo with all the course material for a sound making course using Digital Logic chips:

Circuitry Based Sound at SCLW

I thought fellow Lunetta-heads would enjoy it.