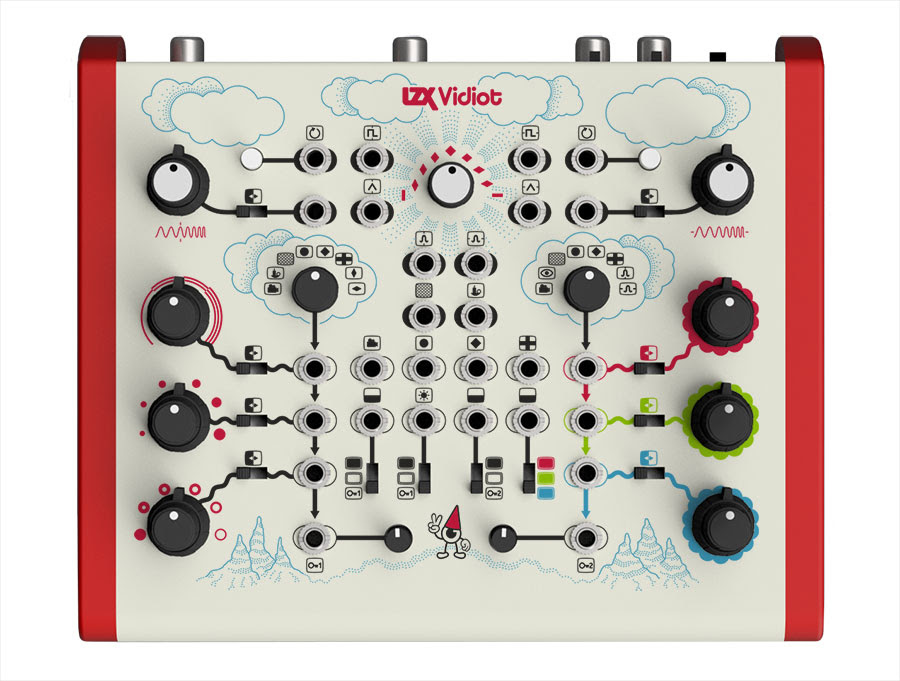 A self contained system at $669, it seems like it could well be the “0 coast” for video synthesis, encouraging people to then dive in and buy more modules…

As someone who has been very interested in LZX’s products recently but was hesitant to dive due to the high cost (about $1500 just for a 3 module starter system), this could not have come at a better time! I preordered, and can’t wait to get it. Note: Due to some unanticipated expense involved in continual production of this device, effective January 1st, 2019 the retail price of Vidiot will rise from $669 to $799. If you're waiting on your order, please check our production schedule and...

fyi in their announcement email out they linked to this video, which is the third gif on the product page:


i’m a bit split on this versus the 3trinsrgb1c as a starter for video synthesis, especially as i am not planning on getting into modular.
1 Like
cmcavoy October 31, 2017, 12:22am #3

A buddy of mine has a bunch of LZX stuff. We combined our systems last Friday, me making sound and him making video. It was a lot of fun. He forwarded the Vidiot to me an hour or so ago, seems like a bit of a set up, maybe he’s getting a kick back? Entice a mark with a fun afternoon of video synth’ing, then release an all in one gateway system? Nice plan LZX.

I can see the vidiot pairing very well with the 3trinsrgb1c.

First and foremost, my apologies for unearthing this old (and very specific) thread.

I’m planning on getting either the Vidiot or the Visual Cortex in the next month or so, and am having a hard time deciding between the two – not because there aren’t a few fairly thorough threads around comparing their strengths and weaknesses, but because I feel like what I want out of video synthesis is so different from what most people seem to be after.

What I’m after is minimalism: making some fairly simple and impressionistic shapes and patterns and then animating them in very subtle ways. Closer to a James Turrell, or Dan Flavin, type of thing. The basic tutorials that LZX has on Youtube show the Visual Cortex doing stuff like this; I’m assuming that the Vidiot would be able to do the same thing, but the content people share from the Vidiot is a lot more along the lines of glitchy retro mayhem.

Is anyone out there using a Vidiot for more low-key stuff? Is it good for that, or does it want to go wild, and would forcing it not to do so be a waste?

I have a vidiot and use it for relatively mild stuff. I’ve used it for a drone yoga event where the yoga instructor led the class through a yin yoga session, a musician played slowly building drones and I did slowly evolving shapes and patterns with some video feedback.
The knobs are sensitive, so I used a batumi with really attenuated lfos to modulate the video.

It might think it wants to be wilder, but can be subtle.

I’ll see if I can find some photos.

Oh, amazing! That sounds much more like what I’d had in mind. Some pictures would be incredible, if you could find them.

Something that I really liked in the LZX tutorials was a very simple external video edit — they had a visual cortex running with a DVD player in, and were able to overlay basic geometrical shapes onto the video feed without any crazy cross-interactions between overlay and feed. This is, again, super boring stuff, but it’s what i’d want to do

Is that this part? If this is the sort of thing you want to do, you probably need the Visual Cortex, which can process color video because it has a component video (Y/Pb/Pr) decoder. The camera inputs on the Vidiot and the Cadet III Video Input module only process luma, color information is lost. If you want to retain color information from an external feed you’ll need Visual Cortex or the forthcoming TBC2 module, and need your source to output Y/Pb/Pr or to use a component converter box from HDMI or whatever. If you input composite video to Visual Cortex you’ll still only get luma information, the same luma signal is copied on all 3 input decoder channels.

Visual Cortex has a ramp generator which is also important for generating “shapes” rather than tiling patterns. The pattern sources in the Vidiot are basically: horizontal rate triangle oscillator, vertical rate triangle oscillator, noise. All the other outputs are derived from these, or from external camera/envelope follower inputs. However, oscillators are pretty important for getting more complex shapes than the options you can derive from Visual Cortex’s ~half-dozen ramp options and keyer. You can do some things with audio rate oscillators, especially analog oscillators with hard sync, but you can’t get up to horizontal frequencies with most oscillators intended for audio.

The Vidiot’s UI design I think also invites a more experimental approach – “LZX Vidiot” and “NTSC/PAL” is all the text there is anywhere on the unit. This probably encourages patching that yields a bit more chaotic results. It certainly took me a lot of hours of careful patching and scouring the manual, and eventually A/B comparison with some Cadet patches, to come to grips with what the device was really even doing. There’s also a noise generator onboard, and it also really shines in a camera feedback workflow, which, like… if you wind up getting any LZX gear, I implore you: explore camera feedback.

Echoing what @csboling said above, if you want to do an isolated Turrell-like shape, the ramp generators in Cortex will suit you better than the oscillators in the Vidiot, which are great for patterns but trickier for single cycle centered symmetric shapes. Despite your minimalist goals, you may not be satisfied with either alone, and might end up wanting to add something for ramp processing like Shapechanger or Navigator (or Memory Palace) to expand your shape repertoire. But you’ll be able to go a long way with the ramps, keying, color mixing and input processing in Cortex.

Thank you, everyone, for such insightful responses! @csboling, that’s the exact spot in the video I was referring to, though, the more I think of it, the more I could do such simple geometric overlays using Flash or something else software-based – and maybe what I want is something a little more messy. And, as you put it, maybe what’s best for my first video synth is something that encourages me to play around, experiment, generate some chaos, and, y’know, learn. Plus I have seem some things done on the Vidiot that are more or less exactly what I had in mind – particularly bits of this video – and if this example is some very masterful wrangling of the Vidiot, then there’s something to aim for, right?

@Dewb –– good point. Maybe the question is to figure out which would be a good starting point, since I could easily swap my Vidiot for a Visual Cortex or what have you later on?

I very much want to make blurry, hazy video paintings; they don’t necessarily have to stand still, or necessarily be symmetrical. Some kind of dancing, breathing “aura” is what I’m after. I think what it is, is that I want to be able to simplify at least one of the variables at play (i.e., it’s a moving pattern but it’s just moving in one direction, not a hundred at once) and control the mess a little bit.

Right now I’m leaning towards Vidiot, with the sense that it would be a great intro to video synthesis, and that it would give me more variables to play with right off the beginning – I would rather not get sucked immediately into a video version of audio modular synth G.A.S., and could see the Visual Cortex being very dangerous in that regard.

I started out with the 3TrinsRGB, then to the Vidiot and a V4–finally to a full LZX system. Strongly recommend starting with the Vidiot, because it’s a full self-contained system. The VC is designed as the cornerstone for a system of modules. There’s no problem creating beautiful subtlety with the Vidiot, but it’ll give you a far wider range of imagery than a lone VC.

I would rather not get sucked immediately into a video version of audio modular synth G.A.S., and could see the Visual Cortex being very dangerous in that regard.

Yup, this is a very real risk.

Vidiot + V4 might be a good self contained playground for you. You might be able to use the keying and wipes in the V4 to make up for the lack of ramps.

I own both a Vidiot and a Visual Cortex. If i had to pick just one I would go for the Vidiot. I don’t think you can do all that much with just a visual cortex and if your using a computer to generate signal to feed into it there are some other computer ways to go…lumens, Vsynth… Visual Cortex is great when you have other video modules and more of an investment. Unless you planning on growing your system i would go vidiot over Visual Cortex. Visual Cortex is more of a video mixer and ramp generator. you need other stuff to modulate and change shapes. I would also throw memory palace in the mix of stuff. you could use it completely on its own or use it for feedback and video input.
couple videos i made with only the vidiot:


video i made with full on LZX more shape based:

I have a vidiot that I’m currently trying to find a buyer for that is posted on the LZX facebook page! (nicholepichon)

Here is the info about the yoga event we did:

Lay Your Body Down

Daniel Chamberlin and Mark Perretta will join PlySpace Artist-in-Residence Karl Erickson for Lay Your Body Down: May 2019. This installment in the monthly Drone Yoga series combines Yin yoga and meditation with an immersive audio-visual experience including long-form keyboard and tape loop improvisations from Perretta and video projections from Erickson. 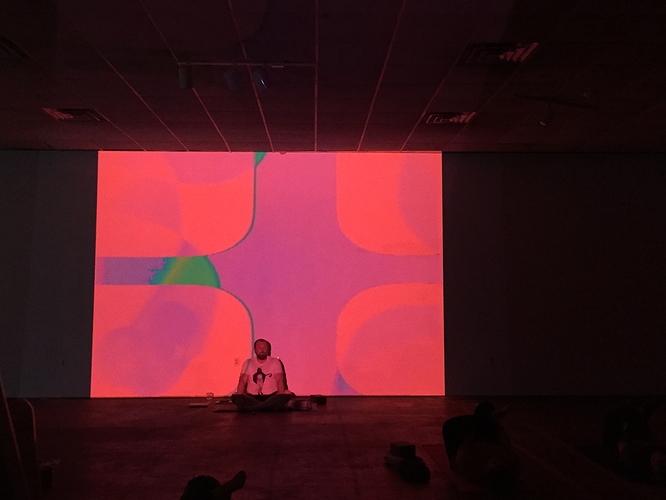 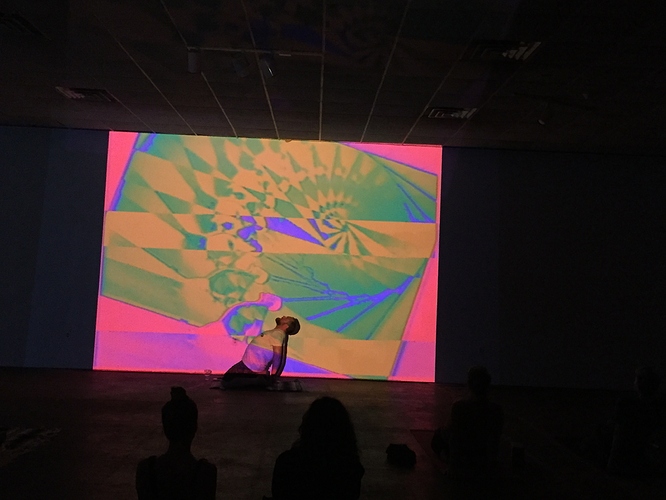 I was using a vidiot and an 0-coast to do the visuals (not a batumi, I forgot!).

Wow, this is just incredible. Exactly what I was imagining wanting to do! Thank you so much for sharing. This definitely convinces me.

Thank you @robotboot! That makes complete sense. Vidiot it is

These videos are so, so cool. I love the range of tones and textures! Makes me very excited to start!

https://www.youtube.com/watch?v=4WDFvg7iamA this is just a vidiot two cameras and two projectors

video feedback and camera feedback are great additions to making videos with a modest set up.

Wow. It’s incredible how much you get out of that! What cameras are you using? I suppose I could look for some thrift-store camcorders…