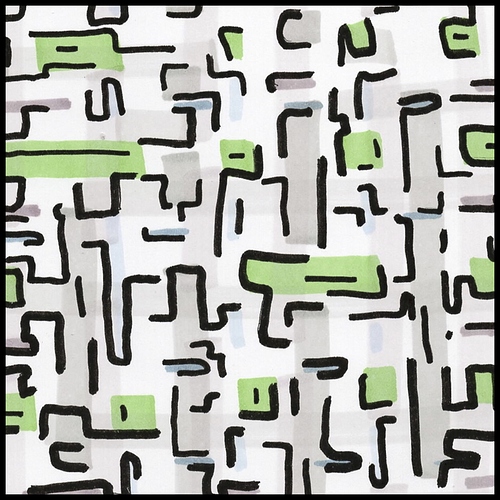 m18s uses the concept of steps and stages to tell time. each step has a specified number of stages, which can be expressed in a way similar to Morse Code.

crow, connected to druid or ^^derwydd so that you can modify and modulate the sequence

at the bottom of m18s.lua you can find configuration/initialization and setters sections:

configuration/initialization:
you’ll find two sections of variables, one for each voice. these are the variables that crow uses to define the sequences it is running on boot.

here are those variables for voice 1, annotated:

scale1 is the possible notes the sequence can be in 12-TET semitones
seq1 is a table of steps. each step is defined as a table of:

Note that neither scale, nor seq have to be of length 8 (and they don’t have to be the same length either).

setters:
m18s is not a sequencer you perform with manually. Rather than an interface of knobs and switches, you are given an interface of functions which can be used to modify and modulate the sequences produced in real time. Note that you can also manually change the sequence using any of the variables mentioned in the configuration/initialization section above

Make sure crow is connected to your computer and you have one of the repl environments open, druid in the terminal or the ^^derwydd maxforlive device in ableton.

For all the following functions, _v is the voice paramter, and can be 1 or 2. this specifies which sequence you are targeting.

Also just want to shout out the RYK Modular M-185. It seems like a really well thought out module with a lot of useful programming features…there’s quite a bit more configuration and programming that you can do with it than this script touches, not to mention it seems like a very, nice playable interface. Also the manual was very good (I used it as the basis to create a skeleton of the code).

alrightee, I think I’m finished with documentation for the time being.

as far as making music with this script, some cool things I’ve been doing as I’ve been working on it:

I did a similar thing in maxmsp, I’m definitely going to play with your script now!

Very very cool! I miss my Metropolis so this will be fun to mess around with. Could see this being an awesome app on Norns with some fun visuals. Maybe even adding grid support too. Any lines members out there up for moving this onto Norns?

This is really cool, @jlmitch5! I’ve been excited about learning more on coding sequencers for crow (& just friends etc) after @Galapagoose’s most recent twitch session. I had a few days off and was diving into that. This looks like answering a few questions I had after that, thanks! I came across the Vermona MeloDicer today and immediately thought about how to re-create it in crow / norns etc (video here). Anyways, thanks for this and the nice documentation.

thank you for this wonderful script @jlmitch5. i’ve been studying Maps w/ Trent video and your other script in the past few days, a_weekend, i’ve learned so much and also really love the music you made with it. i never do any coding in my life, but so interested and been trying to understand how everything works in scripting druid for crow. it is so hard for me to grab at first, but slowly i think i’m beginning to understand a little bit now

looking forward to try the M18s and study it.
cheers.

Porting to norns might be something I’m interested in doing once I finish some other things, but also totally open and super stoked if someone from the community wants to first!

At a very basic level, this would be really easy to do…you could copy the script over, update the lines doing output to interfacing with something like the polyperc engine (or whichever engine you’d like really), and move to using some sort of clock on norns instead of the input 1 stuff.

Grid would lend itself well to the control of the stage count and stage gate modes. The 16 8-way sliders give the M-185 128 different stages, same as the modern grids

For note entry, you could have it be something that is done with norns and encoders (and be able to map to a midi controller) or have it be on a secondary interface on the grid which appears with some sort of knob turn or button press on the norns

crow is a great platform to get started coding with. I will say the advance1/advance2 in this script are somewhat complex and hard to reason about. Partially due to all the modes and different things that can happen (though I could probably make more elegant for sure).

That being said, the stuff at the bottom of this script should be really easy to interface with, and I tried to write a lot of documentation information of how to above so people could jump in and start using them, even if you don’t have coding experience. And of course, if any questions arise about this script, feel free to reach out to me in this thread and I’ll do my best to answer.

If you are looking for a good place to start, the crow studies have a tutorial based flow which walks you through the code highly recommended. @Galapagoose has also done a few really cool live stream walk-throughs of some crow script ideas the past few weeks that would be cool to check out, you can find out more on this thread. My a weekend scripts are also pretty simple if you want to check them out, tonight.lua especially.

did a lot with m18s for my lines community set, figured I’d share some of the details here.

The first 9 minutes use a modified version of the script (gist here), that maps input 2 to a 8-position selector (which I control manually with a 0-5v offset knob from my quadratt). I did this so that I could change the sequence as time went on.

11-14 minutes in, the tape is playing back some early experiments as I was writing m18s, overdubbed and pitched down using ableton’s “beats” warping algorithm to turn it into some less “on the grid” and more “texture-y”

EDIT: also new version of m18s.lua (just a bugfix and some repo housekeeping)

sounds awesome! i see a Mangrove, what other oscillator?

@electret this is awesome! Gonna have to pull this down and try it out.

@Rollingpeople thanks! It’s plaits in formant mode. They both go into 3 sisters all input.

I’ve been trying, but for some reason whenever I try and run or upload this script to crow in druid, druid just freezes and I can’t get it to work. This and the Just Friends forked script from this thread don’t work for me. I have the latest crow firmware and the latest version of Python, and still can’t get it to work. All the other scripts work fine, and I can still reset everything after quitting the Terminal. Any ideas?

Hmm. Thanks for the report. This script is super close to the max script length…maybe it’s just not able to write it but it’s failing silently for some reason. Can you try ^^c in Druid to clear it out, and then running the script.

Sure thing! I’ll try later tonight and report back.

cool sounds good! Vaguely remember some stuff like that when I was developing it

So it’s definitely different because before it was freezing up druid.

this happened to me once where the name of the file somehow got put on the top line…can you check that? if so, could you delete it and try again? 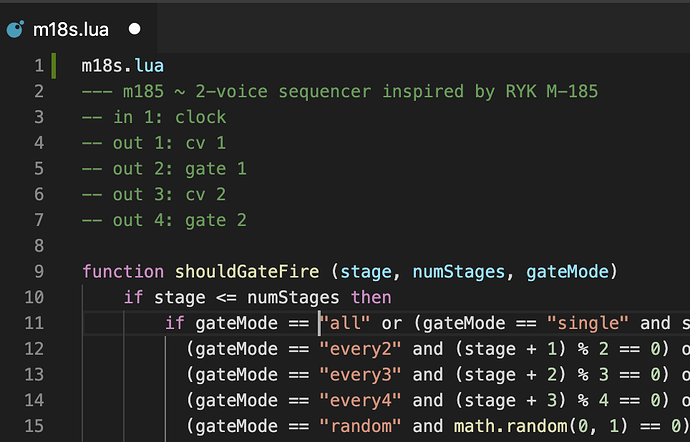