I’m fascinated by the sounds I hear from Machinedrum UW tracks and videos but they are a lot of money.

Does anybody know how risky they are in terms of failure with age or how repairable they are?

Also, how can I upload samples if I have a Mac that doesn’t support c6?

I believe the mk1 has an outdated power supply that is tough to replace if it fails. Mk2 changed this.

Also the dsp chip is discontinued so if that fails they are not readily available.

I don’t know about any other specific issues other than usual old equipment problems (burned screens etc).

I’m terms of sample transfer, there are other sysex programs you can use like Sysex Librarian, but you’ll have to convert you samples first to SDS format in Audacity or something similar. Sample transfer on the MD is SLOW though, even if you have the “Turbo” midi box.

I love my Machinedrum (MK2 UW) but I got it for $650 right before the prices started climbing. Whether it’s worth the high prices is hard to say. I probably wouldn’t buy one for the prices they go for now, but I wouldn’t sell mine either.

I’ve beennusing mine regularly since 2015. Bought it used. I stopped using Macos in favor of Linux a few years back. I seem to remember someone making an open source script for sample transfer. If it breaks I’m not sure what I’ll do. It really depends on what breaks and if parts are available. Crossing my fingers that it stays in good working order cause I love those sounds.

Sample transfer via MIDI is a pain. I had a Mk.2 version for many years, but it had been gathering dust in a box for ages, largely because it’s such a pain to back up.

That said, it’s a fun machine to use, if you’re not bothered by this, and the 12-bit sample engine.

On balance, I’d say if you’re primarily interested in sample-playback, go for a Digitakt or Octatrack instead.

I sold mine recently for almost 3 times what I paid for it about 10 years ago.

Spent all the money on Eurocrack, of course…

Just wondering why you would opt for the Digitakt over the Rytm mk2?

Before you spend a pile of money on a used MD UW (which I love dearly, but yowza), it’s worth reading this note from the Octatrack Mk.1 manual: 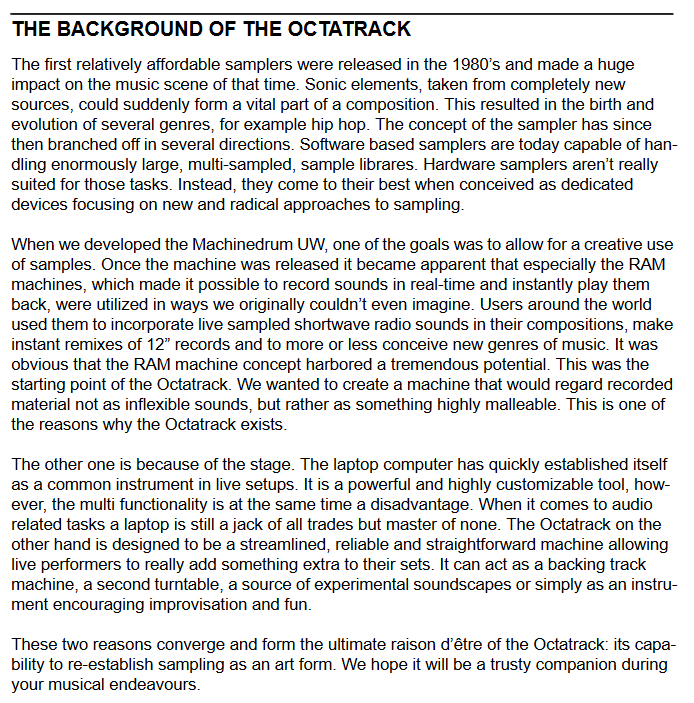 So, if you’re watching MD videos and it’s the super glitchy resampled sections that are catching your ear, you’d be very happy with an Octatrack for a third of the price that MDs are going for.

I guess the Rytm might be more like the Machinedrum in some ways. I’m not that well up on newer Electron devices, I must admit.

Digitakt is cheaper though, and if you only want to work with samples, then might still be a good bet.

I think I want samples and a drum synth.

So, if you’re watching MD videos and it’s the super glitchy resampled sections that are catching your ear, you’d be very happy with an Octatrack for a third of the price that MDs are going for.

When I got rid of my Machinedrum, I bought an Octatrack instead. They’re very different beasts - to an extent I hadn’t really appreciated until I had one on my desk.

While it’s possible to use the OT in a similar way to the MD, you’ll soon find yourself getting frustrated with the 8-note polyphony if you try.

That’s not to say the Octatrack isn’t a great box - it’s just not a replacement for the Machinedrum. It’s designed to do quite different things.

That’s not to say the Octatrack isn’t a great box - it’s just not a replacement for the Machinedrum. It’s designed to do quite different things.

For sure. I have both and think that they’re two of the greatest electronic music instruments ever made. What I mean, though, is that the Octatrack is a lot easier to use for the resampling workflow that makes the MD stand out in a lot of mixes. If you already have a drum machine or synth that you like, connecting it to the OT can give you a ton of flexibility and get you a lot of the way to “that sound”. Combining something like Syntakt and its CTRL-ALL with the Octatrack and its scenes would be a great workflow for 2/3rds the ludicrous cost of used MDs right now.

It’s not. I had both, kept the Rytm. They are both drum machines but thats about it. The MD has more LFOS and is a more creative sequencer in some ways. It also does less steps per sequence The sound is really nice, but the AR has a more earthy and organic tone with it’s analogue filters and effects. It also is a one shot sampler if you have the mkII version. Song mode of the RYTM is much better. The MD has some bugs where it won’t always change patterns when synced, obviously those will never be fixed.

Also the sound of the drums is totally different. MD more warehousey and industrial, Rytm more soft around the edges (which is great if you want to add distortion).

Digitakt sampler is somewhat more robust (many say they are “the same” but that’s not quite true), has a smaller footprint (the size feels so right for the device), is cheaper, and has way better midi implementation than rytm.

DT is a drum machine only via samples or looping single cycle waveforms vs AR machines which are actual analog (and some digital like the noise) circuits including the filters. Also some don’t like the AR pads for example.

I parted with my MKII version about 10 years ago, unfortunately out of necessity at the time but I didn’t lose money on it either. It was / is a wickedly great machine. And yes, even by 2008 standards the sample transfer was clunky and painfully slow.

I was curious about re-buying one over the past year… in the UK they are going for £2k now which is totally bonkers. I don’t think the box will achieve museum status a la 808, although the market wants to push the prices higher. Knowing how it operates and its limitations I couldn’t bring myself to drop that money on one now and would rather point that £2k towards two current flagship Elektron boxes.

The MD has some bugs where it won’t always change patterns when synced, obviously those will never be fixed.

Never say never! Here’s the current unofficial firmware that fixes a lot of bugs. Check the changelogs for the previous few versions.

Replying to highlight this, the unofficial firmwares do more than fix bugs! They add a whole bunch of functionality!

Coming back to the failure-with-age question, I can say that my MD MKII has developed a couple of issues in the past year. First the battery needs replacing. Was hoping this would be easy (since it’s a MKII) but sadly it is soldered in-place. On the plus side, Elektron have said they are still happy to service it (and update it to a replaceable battery). Second the EFFECTS mode led has died. But both are pretty minor issues.

Thanks. This is the sort of thing that makes me think it might be better to opt for a new machine.

Pretty much any vintage synth or drum machine will need servicing at some point, and the MD is starting to approach the age when it could be considered vintage. The good news is that the MK2 has parts that are still available.

I am a recent new machinedrum owner.

The alternative firmware and the megacmd external controller are both brilliant if you want things that weren’t in the original firmware - microtiming, tonal machines, per track length, trig probability, easy polyphony, additional effect tracks, and much more.

Using the UW on the Machinedrum helped me more fully understand the Octatrack, so now I have both. UW is archaic in functionality and also plays back 12 bit, which can be very dirty but it very definitely has its place for me.

As a long time Rytm owner, I strongly prefer the Machindrum. That’s completely subjective but I think the Machinedrum is still uniquely special even 20+ years later after the first version.