Maiden "update all" tends to stall

I’ll be happy to report it elsewhere if that’s better for the devs/maintainers (GitHub issue maybe?) but Maiden tends to stall on the updating the norns scripts.

This is an UI issue since I know the projects are updated behind the dialogue; if i wait for a few minutes and run the update again, no updates will be found. Instead I get the “No updates. The latest versions are already installed”. If i login over ssh and investigate the git repos, recent commits have been pulled.

Sorry i don’t have access to a browser developer console on mobile browser (boo!)

For me, when this happens I get:

So I suspect it’s a network issue on the Norns side.

Aha that might be the case for me too; I don’t access norns with its name norns.local but with it’s IP address.

Here’s the logs from a clean run right after a power cycle.

yep I’m getting the same behaviour too

I get the same. Had my Norns shield since August and it’s always done this if I update all. Updates do all get applied from what I can tell

After @NoraCodes 's screenshot (thanks!) I started polling https://norns.local/api/v1/scriptname?update= for various scriptnames hoping to find a response which does not parse as JSON, but my system is up to date since earlier today and responses look like {"name":"quintessence","updated":false} and parse fine with JSON.parse(). What’s the response in the case a script indeed is updated? Is it a valid JSON serialization? 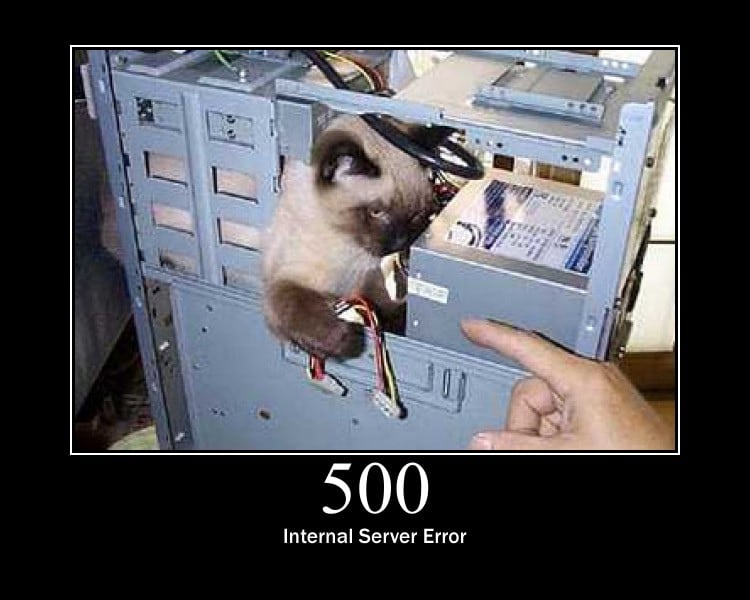 The best place to capture this is probably on Github as part of a new issue. The “update all” logic is not as robust as it probably needs to be now that people have large quantities of scripts installed. If memory serves the backend only supports updating one script at a time. Shortly after the project management features were released “update all” was added as a client side feature where it just issues update requests for all installed scripts - get enough scripts or enough instances of stalled downloads from GH over WiFi and things start to break.

If after running update all things like the maiden REPL don’t work (which is what connection failures to ws://norns.local:5555/ likely indicate) could be a sign that the system is running out of memory and processes are starting to get killed.

Speaking of updates, it would be nice if the library screen showed which scripts have an available update

Unfortunately that is not something which can easily be done. The current system does not force the authors to use any particular convention for versioning nor is there an authoritative source of available versions. In the case of scripts/projects which are distributed by zip file the update function simply re-downloads the URL listed in the catalog. In the case of those distributed via git the update function simply pulls any updates from the upstream repo. In both cases checking to see if there are updates available amounts to doing what it does today - pull down any new content. Maiden in its current form does not offer package management at the level of an operating system or an app store so the experience understandably falls short in comparison.

This is not to say things couldn’t be improved. If this is an area which people feel strongly about it, it is certainly a space where any contribution to the implementation would have wide impact.

Curious if you have the beacon script installed @xmacex ?

I literally went thru each of the scripts I have installed on norns in maiden and updated each one individually until I could find the failure point. It was only this one script that caused the failure. All other scripts updated or didn’t need an update and maiden reported that feedback as expected.

ah thanks for the info, yeah that makes sense

I do have Beacon, but i think this was occuring before it already.

not sure what this might mean, but I nearly never have issues with update all in maiden when using fates, but my stock norns always hangs up with that, so I don’t get to see the status report after all. not a big deal, but curious.

This sometimes happens, sometimes doesn’t. It did today, and I happened to have browser console open. 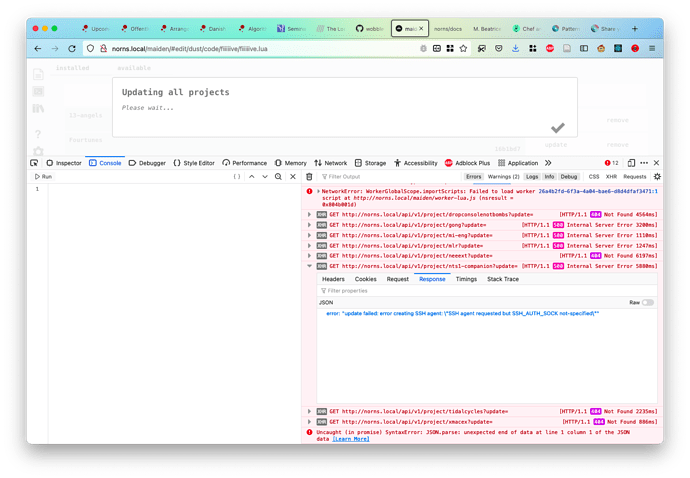 Some of my own draft projects yield the unsurprising {"error":"cannot find in catalog"} response, and some {"error":"update failed: error creating SSH agent: \"SSH agent requested but SSH_AUTH_SOCK not-specified\""}

I changed all my git remotes to use HTTPS rather than SSH, maybe that’ll help.

There’s also the following in the browser console:

bumping this thread, for visibility to any newly arrived developers that might want to help out by adding progress/status to this feature.