this is a stroke of genius. a voice of make noise with midi… ultra slick… kinda west coast… sub 500$… entry level, yet enough “new circuitries” to make it tempting to the rest. oh and it made him say “without vactrols”.

i’m impressed. they are going to sell like hot cakes for sure. I bet it was her idea.

more tempted towards the tempi myself, even though I thought I had clocks covered by mp. it’s just so hands on… and that swap function… then I recall teletype and I’m all good again =)

I hate namm times. so distracting…

Pretty cool. The wave/timber shaping stuff reminds of a bit of the mangrove

I don’t say this too often, but I kind of want that.

Bonus points for the brief cameo from Robert Aiki Aubrey Lowe a.k.a. Lichens, just chilling at the Make Noise booth at the beginning of the video.

I can totally see this kinda thing taking off - There are a lot of people like me out there that simply aren’t going to drop a couple of grand on a modest euro system, but still want to play with CV patch cables. I think these makers are realising that the reason that their customer base is relatively small is simply due to price.

I’ve made a 0-Coast MIDI settings manager for Max. It’s conceptually similar to the Max for Live patch that Make Noise distributes, with the following differences:

Once I’m convinced it’s solid I’ll submit it to the Max Package Manager. During the beta period, you can download it the old-fashioned way here:

Or if Git clone is more your style:

Make sure you place the Coast Works folder in your Max search path (and restart Max, if open).

There’s not much in the way of documentation yet, but if you understand how the MIDI stuff works in the 0-Coast, it should be fairly self-explanatory. That said, there is tooltip help when you hover over any GUI widget and additional info in the Max Clue Window (Window > Clue Window), so you’re not completely on your own.

It currently saves the last settings, so when the patch is launched it will automatically send the last state. Don’t forget that if you want to save the setting on the 0-Coast (so that state is maintained through a power cycle), you have to do so on the 0-Coast itself: hold PGM A to enter the Program Pages, then hold PGM B to save.

I hope some folks find it useful. Let me know if you run into any problems or confusion. 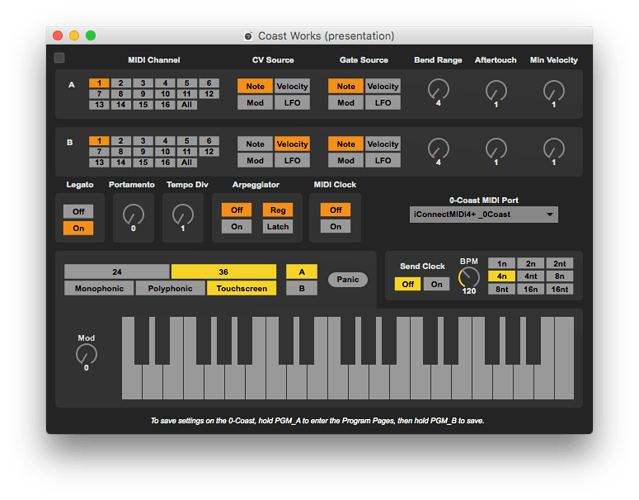 Wow. This looks great! I currently am on Linux platforms since my macbook was totaled. I really wish Cycling’74 made this for Linux now, ha!

I’m not a Pder, so it’s unlikely I will get to a Pd port, at least not soon. Not impossible, just unlikely given the number of projects on my Giant List o’ Stuff That I Really, Really Want to Actually Get Done Someday. There isn’t much to the patch, if someone wants to give it a shot. Almost all the work on this is just moving little boxes around, there’s not really any logic to speak of. So if someone wanted to make something like this, even if they’re new to Pd, it should be pretty easy, especially if you use Make Noise’s or my patch as a cheat sheet.

That said, I may have something for the Linux folks at some point. These days I’ve spend most of my music tech time with the Web Audio and Web MIDI APIs so I may try to put something together for the browser at some point. I believe Chrome on Linux supports the Web MIDI API.

I am thinking of re visiting this little synth and was wondering for some advice.

-From a norns shield, how is the easiest way to get from usb midi to the trs midi of the Coast?

-does anyone know how to set up the coast for midi cc subharmonics idealy from within norns?

-i was considering MN Rosie as a simple mix/blend/aux mixer and wonder if the Coast would allready include most of it besides the fx loop, but the Ui is always confusing me, could someone clarify? Can it mix 2 or more external signals with its own?

At the moment, I’m not sure, but I ordered some ATTinys recently because I want to make a little MIDI interface that just has a 1/8" out. I was surprised that I was unable to find anyone having done so yet.

I am thinking of re visiting this little synth and was wondering for some advice.

-From a norns shield, how is the easiest way to get from usb midi to the trs midi of the Coast?

-does anyone know how to set up the coast for midi cc subharmonics idealy from within norns?

-i was considering MN Rosie as a simple mix/blend/aux mixer and wonder if the Coast would allready include most of it besides the fx loop, but the Ui is always confusing me, could someone clarify? Can it mix 2 or more external signals with its own?

For MIDI, you’d need something to convert USB MIDI to either DIN (the 0-Coast includes an adapter to TRS) or CV.

You could set up subharmonic control via MIDI B using the Mod Wheel CC patched to the Time of the Slope (as seen in this video). But you lose the slope, and it’s really nice to have MIDI B as a bonus tap-tempo tri/square LFO. So, if subharmonics are a primary use, the Moog Subharmonicon is much more set up for this kind of thing.

As far as mixing going, the only provisos on the 0-Coast are
a) the Maths section, with one unity input and one attenuverter input
b) the blend circuit, which feeds the LPG.
Both involve giving up some core functionality, so I’d plan on an external mixing solution.

I dont dig that trs midi… so apple, writing from my ipad

Okay but when in a patch i work with other sounds from norns timber, uisng the coast just for basics or miixng, i would have up to 3 inputs for summing? Cool!

The SubHarm is out of my price and kinda too layed out.

i would have up to 3 inputs for summing?

Yeah, it is weird though. I was doing this a few days ago with the slope as free oscillator and the contour as subharmonic (because it can’t loop without help) and I noticed the polarity made a noticeable difference. It also added some weird distortion, which might be congruent with your flavor. Finally, because you’re effectively chaining crossfaders, controlling the levels is a bit awkward.

Okay but when in a patch i work with other sounds from norns timber, uisng the coast just for basics or miixng, i would have up to 3 inputs for summing? Cool!

With the Balance control, it passes through the LPG, and you can only crossfade the external source with the output of the oscillator’s wavefolder. It’s more useful for adding a second oscillator or layering another source - for example I use the OP-1 to sequence the 0-Coast and also feed its output into the Balance to get a layered oscillator.

To use the Maths section as a mixer, you are losing the only source of CV mixing, which really reduces the complexity of modulation available to you. And one channel is fixed at unity so its usefulness is limited.

Again, it involves so much core functionality trade-off that I would really discourage you from planning on that use case. It’s a waste of its intentionally limited resources when there are plentiful cheap external ways to mix.