Hello everyone, I’ve started a series of videos patching my Make Noise Music Easel, which is the unofficial name for the combo 0-Coast & 0-Ctrl. I’m everyday surprised about the depth of this particular combo.
Here’s the 1st patch: 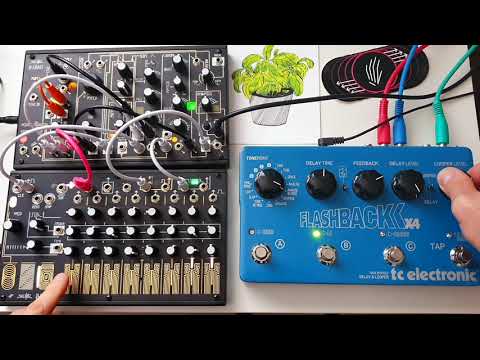 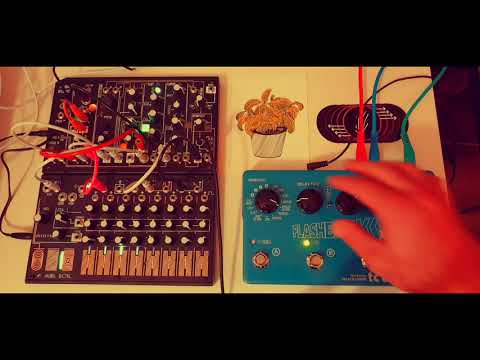 Very nice! Thanks for sharing!
How is the Flashback x4 patched? Through an external mixer? I’m on a search mission for a delay/looper (again) and I had that one before getting into modular and just wondering how it’s handeling the euro levels…

I’ve wanted a 0-Coast for a while and this is doing nothing to dampen that! I keep thinking that I’ll pick one up secondhand but they don’t seem to appear often. I guess now I need a 0-Ctrl too!

This is patched via the headphone/line-out so no “euro” levels into the pedal. I think you should look into ElCap for delay / looper needs. The SOS looper on ElCap is really inspiring although (because?) limited.

Yes indeed, I know. I’m a big fan of the Buchla Music Easel and this is a sort of tribute to that wonderful instrument that for a lot of us is too expensive to buy. I’m hoping that one day Buchla will re-think their pricing policy. Also my point for these videos is to let people see how Buchla inspires other makers and how amazing that can be. It’s how art can move forward by inspiring each other.

I’m sending the 0-coast straight into the fx pedal. It’s just in the AUX channel of my little Mackie 802 VLZ4 mixer. About loopers, there are many options much better than the Flashback, but this one is a good delay + looper that can record the delays in the looper, so it’s a good option if you want a combo of this. It records 45sec of loop though in mono. You should look at other options though, I just happened to have the Flashback here in the studio unused and it’s actually a great combo for the 0-coast/0-ctrl.

I sold my Koma Field Kits in order to buy the 0-ctrl. Best decision I’ve ever made!

It’s definitely “a 0-coast” like “a zero-coast”. It was my first (semi)-modular synth and now that i have a full eurorack modular system I thought I don’t need it anymore. I was wrong, it’s in almost every patch I make and I do have the DPO. I actually kept it because I thought it’s a handy thing to take with me and I can always make a small portable system to take with me for live shows or vacations. Then the 0-ctrl appeared and I was sure I’ve made the right choice to keep it!

Bah - you’re doing nothing to quell my gear lust!

I think I might have to bite the bullet and buy a new one.

Really loving the 0-ctrl 0-coast combo. I’ve racked them with a 2hp mult, Pluck, and ADDAC Drum module in a 100hp box. Running the audio out into Norns is perfect for adding delay/reverb. Very satisfying small rig.

Powering the 100hp case was a fun project. There is an MMI USB power in the box and the 0-ctrl and 0-coast are hacked and daisy chained on one of their stock power adapters. Fun stuff! 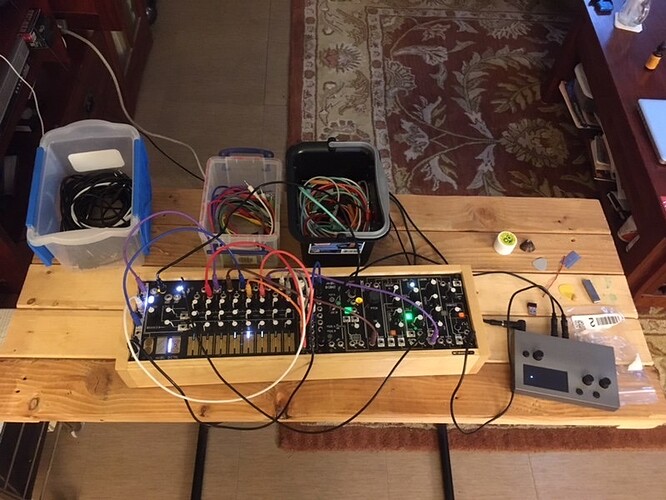 Awesome set up! I’m very interested in different ideas about how to expand the 0-ctro/0-coast universe. The Pluck/Addac drum idea is really cool.

The 0-coast is such a great voice! Adding just a couple more sounds with it is is really all you need for greatness.

I recently made the leap back into the synth world with the 0-Coast and quickly picked up it’s companion. I also got this sweet little stand that really makes it feel like a complete instrument.

After a week or so of totally wild Krell patching and exploration, I finally hooked it up to Ableton and started sequencing it, which gets bananas since you have three clocks bouncing around. I’ve found that if I’m sequencing it externally, the 0-Ctrl becomes a weird little stepped, triple LFO.

There’s also other wild tricks, like running the O-Ctrl at audio rates, and clocking the clock with the slope EOC, using the FM and cycled slope for a strange kick beat, this thing is a blast and will cost me thousands of dollars as I start to want to fill out a case with a quantizer, more LFOs, things to trigger and be triggered, more attenuverters, oh god what have I done?

Here’s a couple quick samples - the first is my first foray into external sequencing (plus some 909 samples and a bit of granular delay on one track), the second is a weird layer-looped krell patch with some guitar pedals.

why do I forget that delay makes everything so much better. I’ve been playing my setup au naturel and then saw this today. Flashback deux is doing a great job as well.

This stand looks great. I rolled my own super simple 0C2 stand, but I have been wanting this exact angle.

With such a small set up it’s important to have a looper/delay where you can record things and move on to the next idea. My videos usually have 2 ideas together that I can connect using the looper. And the “Analog with mod” setting on the Flashback sounds wonderful!

I’ve been using a 0-Ctrl and a Pico System 3 for my mini affordable music easel type set up. It has a bit more feature parody with the music easel but you do need to patch up the oscillators in a specific way to get something closer to the complex oscillators. Still I would like the try out 0-coast + 0-ctrl at some point, looks like a ton of fun!

Example of the pico/ctrl in action (digitakt is there also) 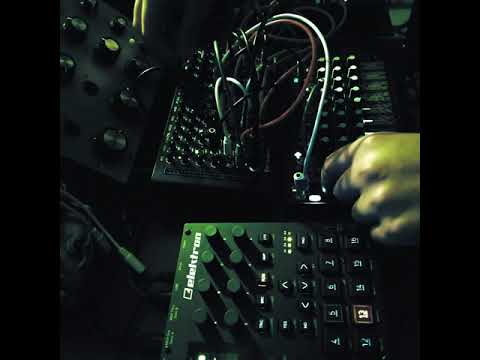 Really enjoy the sounds of the 0-coast, and this controller for it looks very nice and promising. Really going on my wishlist alongside the 0-coast (which I don’t have yet).
Great work @ThanosF to show us.

This is such a cool combo! The 0-Coast was my entrance to modular, don’t own one anymore but I do have a 0-Ctrl to control my Serge stuff.
My only complaint with the 0-Coast was the wave folder, it sounds really thin and brittle at some
settings. Otherwise such a cool and feature rich unit.

Has anyone used an 0-Ctrl with a Moog Werkstatt, Grandmother or MS-20 Mini? 0-Coasts are out of stock everywhere over here so I can’t buy both right now. If I get an 0-Ctrl I’ll only be able to use it with synths I already have for the moment.