Each case being a self-contained thing you can play with, without first having to connect it to other modular equipment (but you can). A single voice if you wish. Definitely a “fewer tricks pony” of sorts.

So some modules would be redundant (e.g. every box ends up with a headphone out), but would that amount/number be similar to systems that were built to offer infinite possibilities?

And also, Modulargrid is one tool, and VCVRack is another. Anything else out there for prototyping?

I think it’s a topic worth exploring, and 1-row boxes look cute

This came from the Eurorack Synthesizers Facebook group (no idea where it originally came from though). It’s a basis of how to approach putting together a system based on a Buchla Music Easel (in this case with the old Malekko Wiard modules). 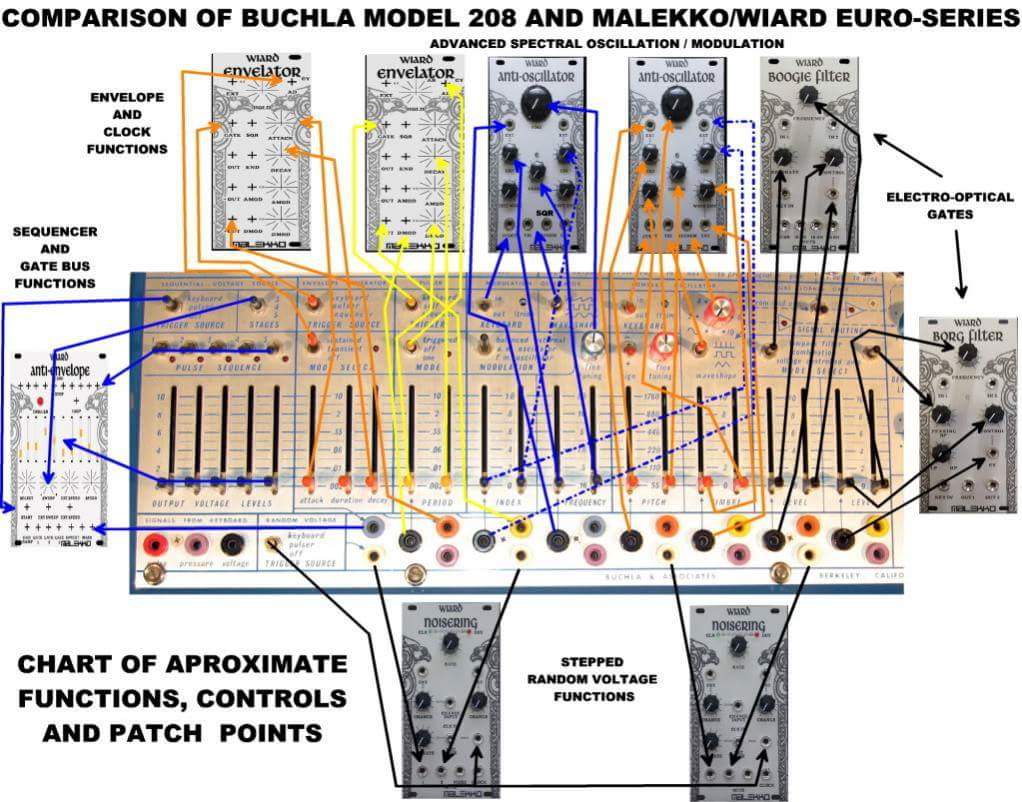 Has anyone had any thoughts about building a modular instrument based off something preexisting like the above?

I’ve been very much building something that can do a wide range of things (to my taste of course) in terms of sound design and composition (a “complete” system, as a concept mentioned earlier in this thread), having more or less forgotten what my original goals were in the system, other than that it was meant to be a centerpiece that tied everything together that has since become so complex and full of sonic potential that there’s little room for layering other instruments (which were going to be looped and improvised over modular soundscapes). As much as I feel that I need more, I feel that it’s too much, and not using everything all at once doesn’t feel like the holistic instrument that I had in mind. And in the same story as you, @emenel, I feel like I’m not getting the most out of each module (though I’m not really buying anymore at the moment before I learn and experience what I have already).

This is the system that I have 90% of after agonizing over it (definitely the right word, thanks @polyoptics!) for months on ModularGrid. I want to downsize it, but am having trouble figuring out how. 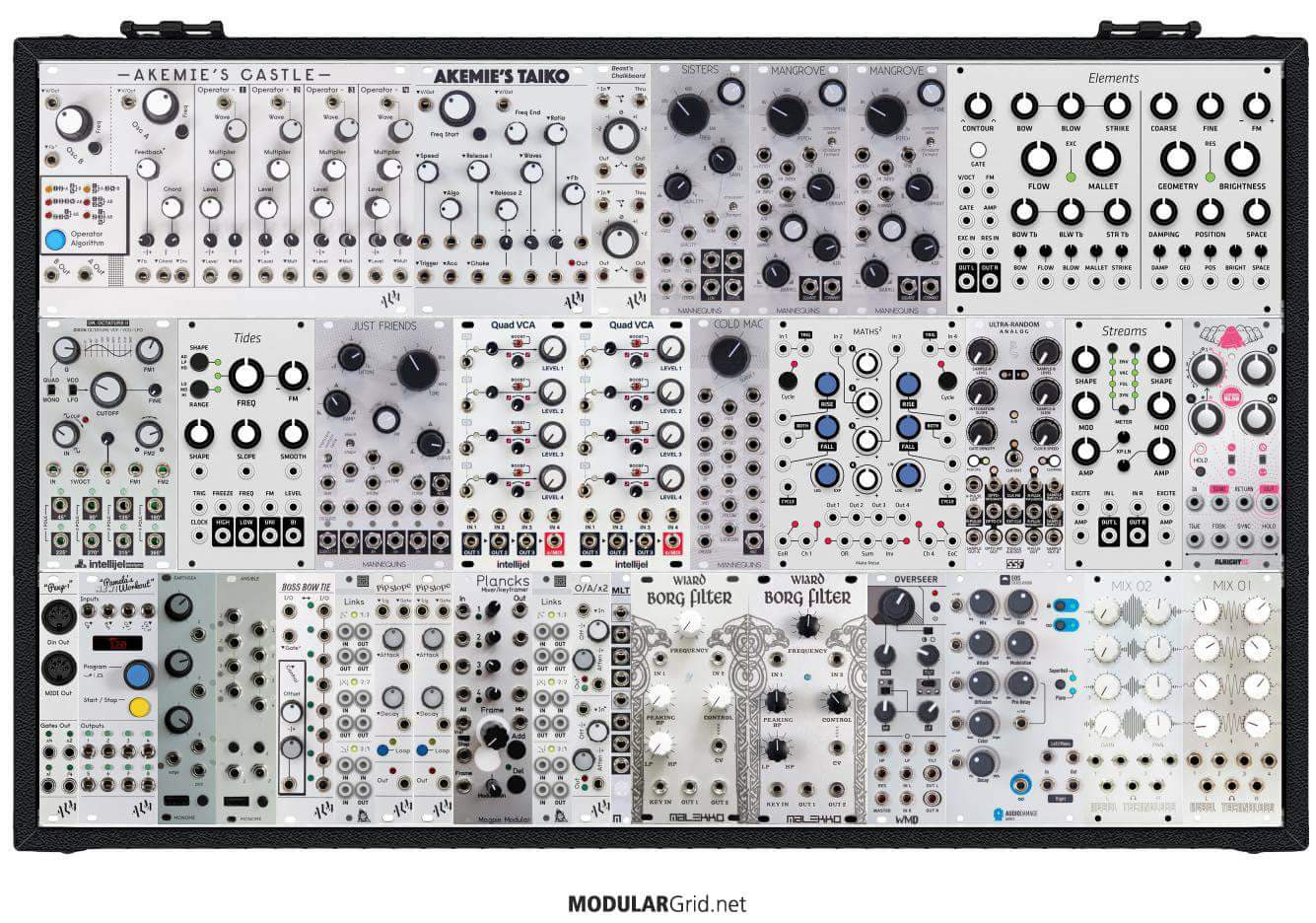 What I’m struggling with now is how to choose what to focus on? The mental calculations @s_hamann mentions are valuable and are a good place to start, but I feel like I’ve lost what I want out of modular other than modular itself!

This came from the Eurorack Synthesizers Facebook group (no idea where it originally came from though).

First time I’ve seen it was in this thread on muffs about how to clone an easel in eurorack (interestingly started by intellijel before they made modules themselves). Sort of fits in with the rest of this thread, I suppose.

Has anyone had any thoughts about building a modular instrument based off something preexisting like the above?

I had a plan for a bit to make a Music Easle-esque instrument using eurorack modules, but never completed my plan. While it would have saved me money I realized in the end I would be unsatisfied because it would lack the ergonomics, flow, and cohesiveness of the Easel. I’m going to save up and maybe get one in 2019 or 2020 (2018 plans are for a Prophet Rev2).

I’ve played out over 100 times in the past 4 years, and the trend for me has been that as I have gotten more proficient I find myself wishing for less and less gear. I recently downsized from three 104hp rows of Euro + Intellijel format tiles to two rows and couldn’t be happier.

The only outboard gear I use anymore is a Radial Engineering ProD2 direct box and a Zoom H5 recorder. I’ll plug in an acoustic guitar or an alto sax once in a while, but the modular is a portable orchestra. If I had more talent I could probably slim it down to one row. 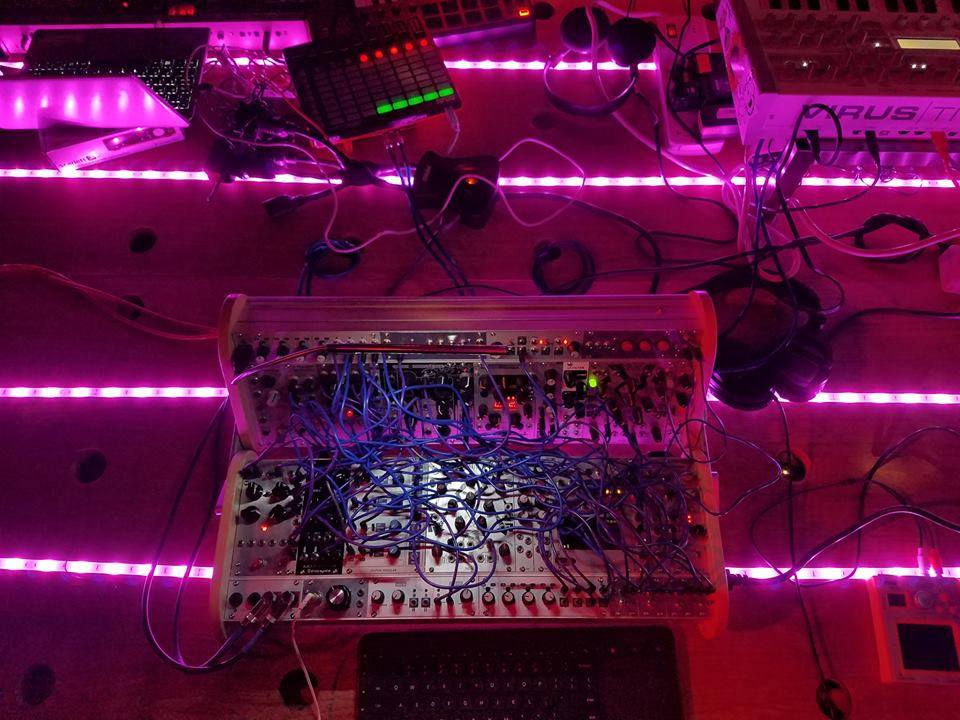 I built this small case to assemble self contained system around Manta / MantaMate. It’s still evolving, but I am enjoying the side system to my main 2xmonorocket 104mx setup. 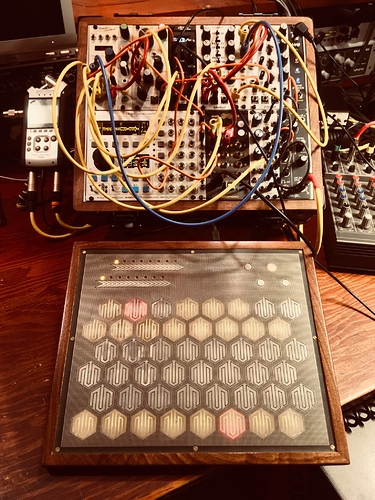 I conjured up this case after seeing this thread on Muffwiggler:
https://www.muffwiggler.com/forum/viewtopic.php?t=76729
I was originally using this old typewriter case as a mini pedalboard,
but it makes a much nicer mini modular case. I should also consider
some tile modules, but I have to figure out power… 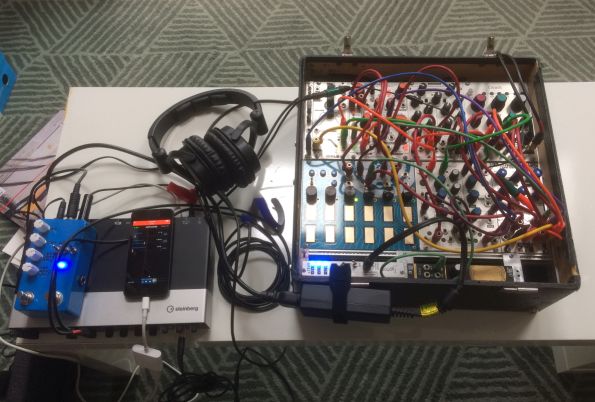 Have a modulargrid to link to? Pretty photo, but hard to understand what’s going on in that context!

I’ve been thinking about this a lot over the past few months. I’d been planning out my rack for a very long time. I’d kind of settled on a 120hp 6u portable rack solution.
 

Over the summer I had an inspiration for a separate rack concept involving using double Morphagenes as a sort of DJ-fun-times rack in an 84hp 3u rack. I started thinking about how to do my bigger rack concept in two rows of 84hp. Where to make savage cuts?

And I’m super happy I did! I realized that I could actually organize around sub-concepts and modularize my rows so that each row works independently with a sideboard of modules to support use independently – as their own “instrument” – or in combination. Each row will now be housed in a Roland SYR-E84 case to maintain portability, which is important to me.
  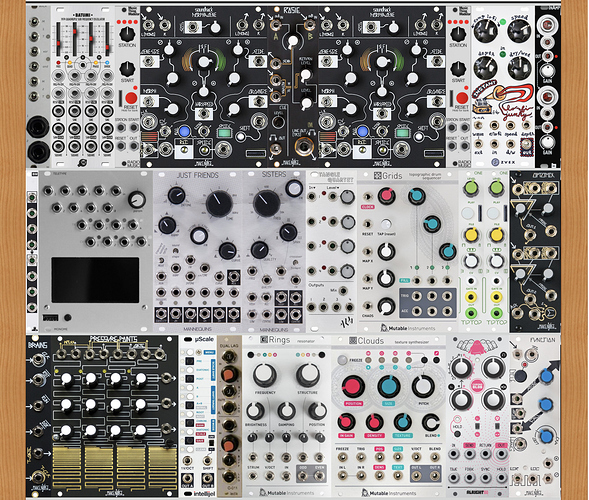 The top row (“Radio Tape”) features my aforementioned DJ-fun-times row. Rosie acts at the master out when configured together (the Optomix and the Function are dropped from row 2 and 3 respectively for the Rosie to allow independent functionality).

Row 2 (“Teletypo”) focuses on composition and obviously features the Teletype with Just Friends. It also has my compact rhythm solution with Grids and the ONE’s. Teletype scratches my itch for programmed solutions but keeps real computers out of the question, which is one of my personal reasons for getting into modular. It does most things, so it’s the supersystem’s glue.

Row 3 (“Performer”) Gives me a playable synth voice with effects. I also kept a Brains on there so PP can still be a secondary hands-on sequencer. Rings is present in this image as the voice, but as I mentioned I actually have a small set of sideboard modules which can be swapped out.

And that goes for all of the rows. Each row works independently or in any combination with interesting compositional consequences. There are some minor ways to tweak this with different modules depending on which rows are being combined and how I find myself preferring to work. For example, these are some modules from the sideboard set.

I also moved some effects to outboard pedals via Rosie’s send out of necessity, but I think it’s an acceptable compromise for my goals - as tape delay and reverb are “global” effects that work well with each setup.

I don’t think my specific setup is useful to anyone but me, but I hope it might inspire you to think about how to rejigger your own setup to better serve your own goals.

This is where I’m headed. The module configuration shown has changed, I’m about midway between the two states:

Blank tile spaces are for some as-yet unbuilt DIY modules. 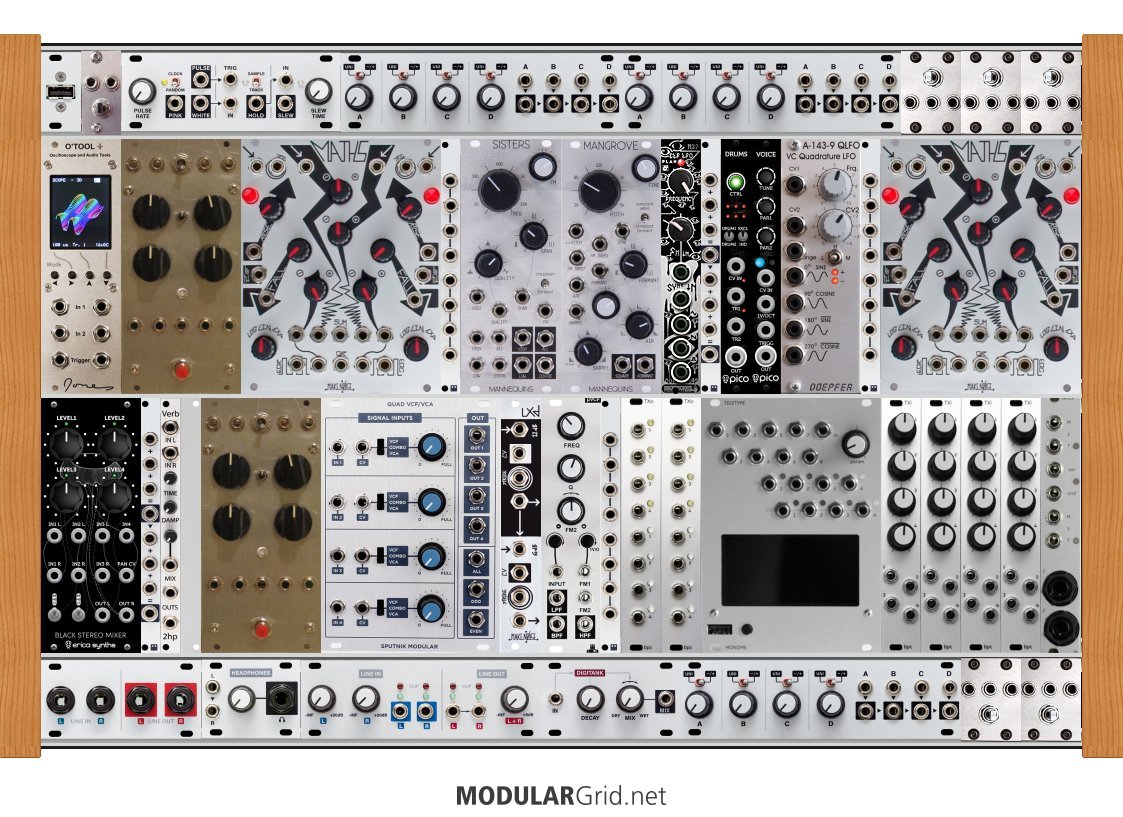 I remember someone posting a video of you performing with a similar set up which I very much enjoyed. Do you have any vids/audio if you playing this thing?

Also how wouldyou use 3 TXi modules? Given that cv and Parma input is limited on the Teletype these input expanders seem to allow all sorts of new scene possibilities - would be interested to hear how you’re making use of that

I remember someone posting a video of you performing with a similar set up which I very much enjoyed. Do you have any vids/audio if you playing this thing?

I think some people have posted video, but I haven’t seen any recently–I usually run across it by accident.

This is a short set from right before I downsized:
https://soundcloud.com/prettyhowtown/live-at-open-oscillator-september-20th-2017

Also how wouldyou use 3 TXi modules? Given that cv and Parma input is limited on the Teletype these input expanders seem to allow all sorts of new scene possibilities - would be interested to hear how you’re making use of that

I use the param knobs extensively for various scene parameters (e.g. Euclidian density and offset) and routinely use all nine (Teletype and two TXi) and find myself reaching for more. I managed to order a third TXi yesterday, which will provide enough knobs and inputs to be able to do traditional step sequencing along with the parameter control I’m doing now.

@grey i did something similar with 2 phonogenes. Super fun!
ISMS is a great case for making a little instrument.

Sounds great! And thanks for sharing how you’re using the expanders. Got me thinking about what I’m going to do when my TXi arrives.

This looks like a cool new case that would be perfect for this kind of setups (95HP apparently)…
No idea about the price though.

I’ve also been looking at the Intellijel 4U cases for building something like this or isms-esque. It seems like a good platform for stand alone compact instruments since you can offload the utilities to the 1U row, freeing up the main space for the heart of the instrument.

I started looking at 1U tiles to free up some space in my 6U, however I also had to think of the UX issues in moving utilities to a smaller size. In the end, only my uJack could have really been replaced as I love the Analogue Systems Modulation Controller

There is a big trend in Eurorack for shrinking functionality, and I personally feel its very much at the expense of usability, which for me is as big a part of the instrument as what it can do…

I want to downsize it, but am having trouble figuring out how

Have you considered getting a 4U 84hp (or similar) case, filling it with modules you already have plus some 1U utilities, and just using that for, say, a couple weeks? I bet you’d end up using existing modules in ways that you wouldn’t currently, plus it gives you mobile option even if you don’t end up getting rid of anything.

This is exactly what I did, except not in a mobile case. Forcing myself to work in a smaller space is really useful.

I have a 3u 104hp case, I really should try in that through the Christmas break.

I think I will scale down to 6u 126 case, and keep a few modules aside (Akemie’s Castle, Elements) because I can’t bring myself to fully part with them.

This thread has inspired me to design this as a downsized instrument: 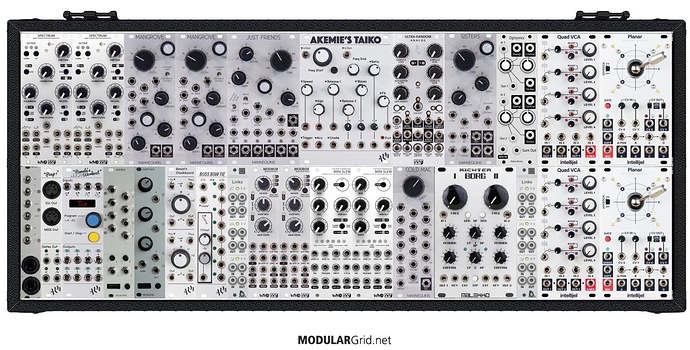 The two Planar and the Walk would be to make the interaction with the system feel more immediate and “playable”, combined with grids (I should also get an arc, considering a Touche too). A central idea with this design, with Planars especially, is to be able to change as many parameters as possible within a patch with a single action, without any re-patching. There’s a hell of a lot of compromise in this design from what I have been building, the biggest being non modular external effects, and an all mono signal path and output. But I think this would be a very usable and fun system.