my unbiased opinion is that these are the simply the most musically designed modules out there. and new stuff coming that will challenge your imagination.

following this closely. the mangrove is definitely my current favorite oscillator, the three sisters are on the way. great features and design, and also quite different from what everybody else is doing. looking forward to more whimsicalraps.

Curious about the cold Mac. The filter seems really interesting.

Having just parted ways with my DPO I have decided to now get a Mangrove.
It’s not a straight replacement but certainly a change in voice aesthetic that I’m really excited about.

The exchange rate is biting us a little harder here in the UK at the moment but I think this oscillator will be a worthy investment.

I was about to build a DYI oscillator by Befaco (even VCO, with only even-numbered harmonics), but decided for the Mangrove at the last minute, leaving me with no more nails to bite while waiting for customs clearance after it crossed the pond.

Anyhow, I’m glad to read that current users find it sonically different to anything else.

At its most basic, six audio inputs are mixed to MAC with linear voltage-controlled amplification of the mixture. A second simple VCA expands into crossfades or panning depending on ins and outs chosen…Integrated envelope FOLLOWing can analyze a source, or simply slew a pulse or CV - ideal for self-patching into SURVEY. Full wave rectification, and a wildly aggressive CREASE function fold audio into new timbres, while LOCATION follows the trend of your modulation, shifting in longform gestures.

crazy to have all that in 8hp

two mangroves, the sisters, and a cold mac make for a very compact and capable package. mac looks and sounds like another must buy.

my credit card can’t take much more of this

I finally just checked the manual on the cold mac to figure out what it does. Amazing. Love deep patchability like that. The filter is tempting me now too.

I had the osc for a while but sold it on fairly quickly because I get grumpy when an osc doesn’t give me a pure sine out. Plus I think I would rather patch complex things out of basic waveforms. Still a really fun/inventive module regardless.

for now, i’ll be trying new mixing games with twin CM modules i just got 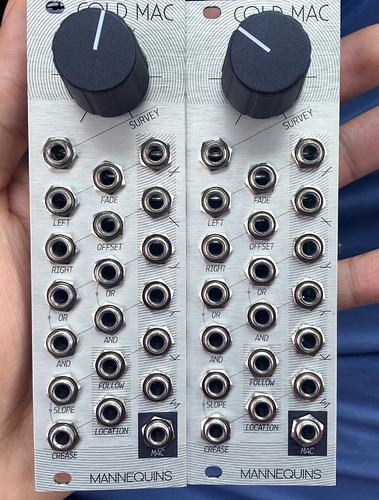 anybody who has three sisters tried pinging it to make drums?
or the speech synth techniques?
what about sine chords?

this the exact demo of 3 sissies i was looking for: https://soundcloud.com/jcn7/3-sisters-and-sara

was reading up on COLD MAC, and have a question:

the manual says “inputs are AC coupled so MAC will not mix CV signals” but then it also mentions that with nothing patched there is a DC of -5V normalled to LEFT and +5V normalled to the right, and it also suggests self patching, but wouldn’t the outputs of Follow and Location get filtered out as they might be too slow changing?

I believe the above reference to MAC is solely for the MAC output, rather than all of Cold Mac.

Easiest way to understand is that the entire module is DC-coupled (CV capable), except for the MAC output which just AC-mixes the inputs down the left column, through a VCA controlled by Survey…

ah that makes sense, thanks!

Quick question. Trying not to start a new topic for a question which is about all Mannequins modules.

How do the CV ins work on Mannequins modules? I looked at the Sisters and JF manuals and I don’t see mention of this.
What CV is expected? (eg on JF, if I set the Intone to fully CCW, what voltage needs to be added to create the same result as the knob fully CW)
Is the CV added to what’s on the pot, or is it make Noise style where the pot becomes an attenuator?

+/-5V in general will turn a knob from 12:00 to either direction. On analog modules you can access settings outside the panel controls by adding a positive voltage while the knob is CW or vice versa.
Main exception is BARREL on Mangrove which is less sensitive for more playability of the utonal chaos.
Analog v8 inputs are limited only by the intrinsic circuit capabilities.

Digital modules (read: JF) are +/-5V limited, except v8 which is -2/+5V limited (to enhance accuracy).
The knobs are always offsets regardless of CV presence. You’ll probably want some attenuators in your system.

OK, understood, thanks.
Unfortunately I’m trying to program Intone on JF using Levels, which won’t put out -ve voltages. I had hoped to set the Intone pot to CCW and add 10v to get the max position but as noted above the +/-5v limit won’t allow that. I guess I will need to add a -5v offset to my Levels output.