I just got my JF back from repair … I could relatively easy repatch from the picture I’ve posted and got very similar vibes (sax like sounds), as you can hear here:

In a bigger patch in combination with other modules (upper part of the first picture):

A few parameters are a little different then show in my last post (but not by much) except for one big difference: I had to switch JF into “shape mode” to get similar “saxy” results. I have a few more pictures, this time with a running system which is also showing the parameters of OCP. Also added a screenshot of the FX I am using in Ableton: 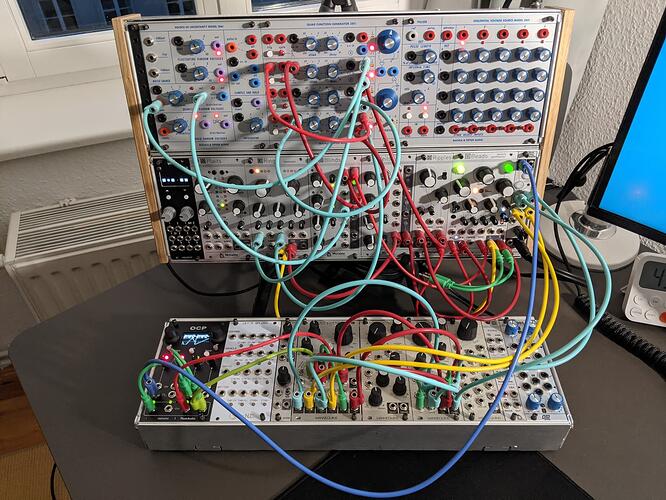 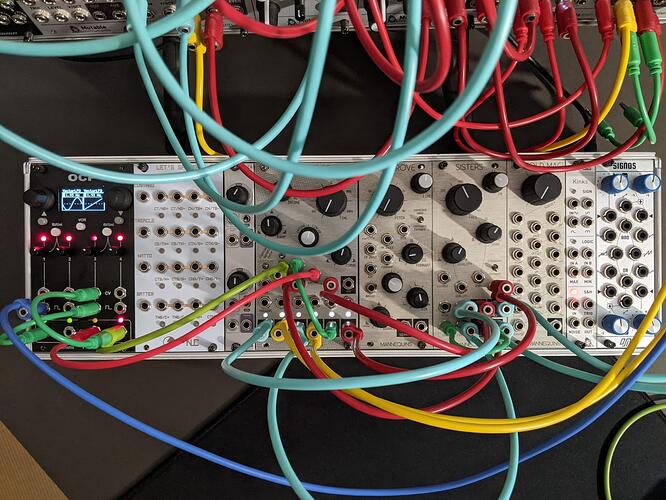 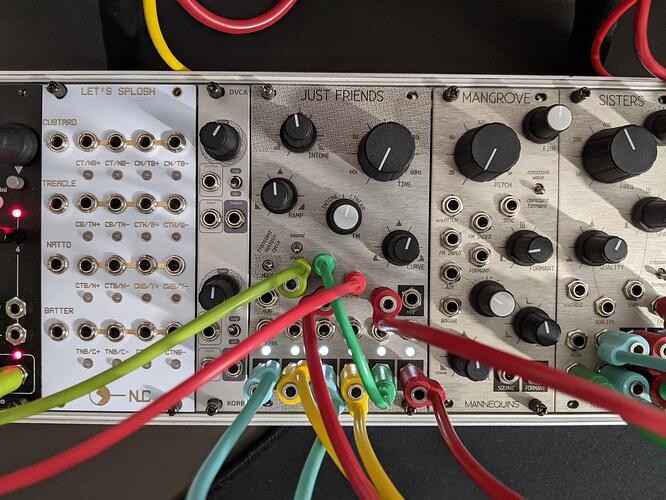 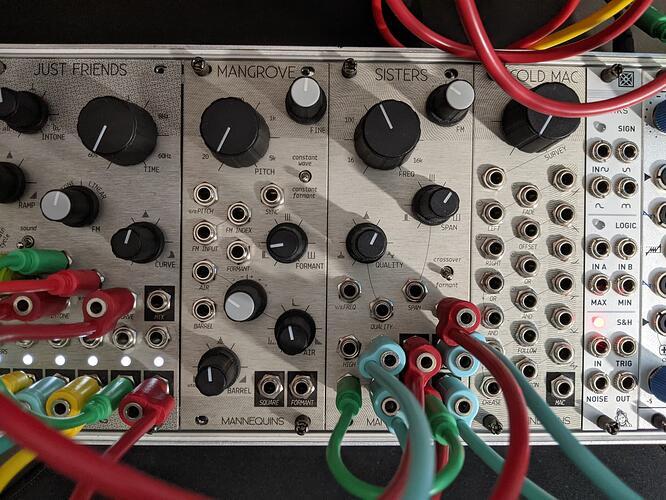 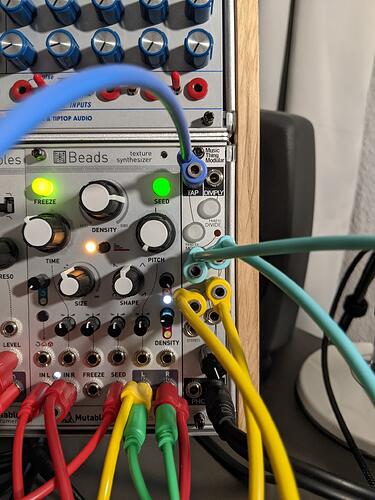 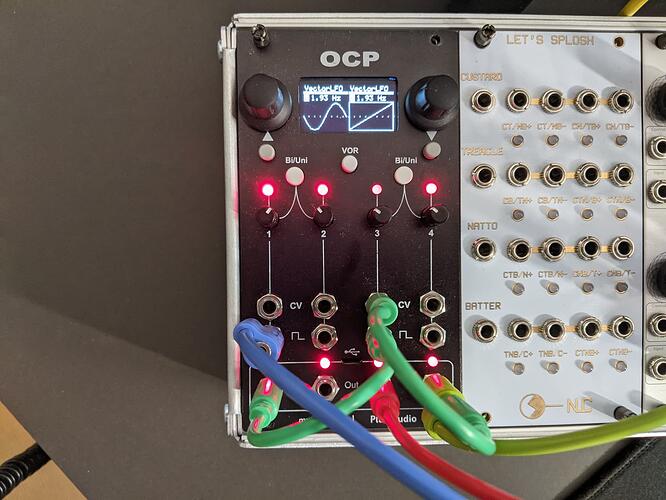 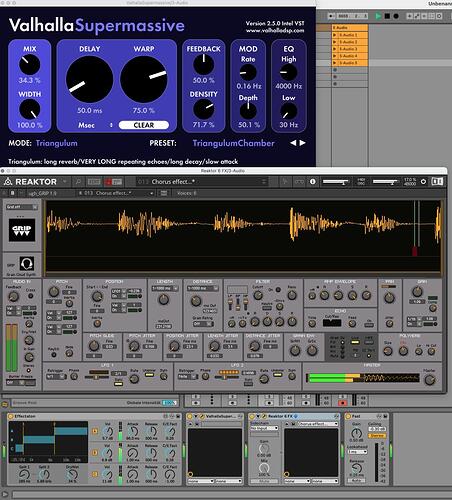 (sorry for the poor image quality, I only have my old crappy android phone at hand)

The gestures come from playing around with Sisters FM Quality and Frequency knob.

somehow I can’t get that chord on newest firmware

I’m not sure if this makes any sense but I mention it in case anyone else runs into this.

I will definitely try this since my MIX output is nearly useless because the distortion.

A very general question about the silver and gold panel versions of just friends:

Can i get the golden panel features on a silver panel jf via a firmware update?
Iam Thinking about getting a second hand jf and the silverpanel version would be the less expensive option.
the different power draw is not a problem for me…Anything else that speaks against silver panel?

Any recommendation/ hint is pretty much appreciated.

Thanks, thats good to hear. So i can buy a silver panel jf, and if it isnt already fixed i can send it over to bastl (i read that they take care of eu customers)… right?
Btw. Insane prices atm.

Also FWIW I have a V1 version that I never got “fixed” and have had no issues for the 5 years I’ve owned it. My understanding is there’s only a few modules that are sensitive to the issue, and if you want to be extra careful you can always patch RUN first and avoid the problem completely.

My first fiddle around with PLUME 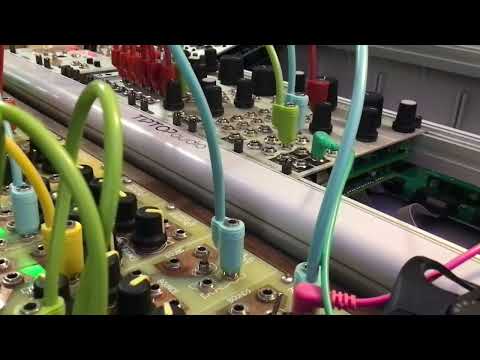 Triggers are all Rolz

Did this take care of the distortion for you? It’s been driving me nuts

Quick note that since v4.1 there is a compressor/limiter on the ALL output so distortion should no longer be an issue (though there is some interesting squishyness to it now).

Some dry JustType dancing around across the stereo field

That’s great. Is it just the voices going into a nearness?

I have been using this script non stop for the last 9 months, so thanks @Galapagoose and @desolationjones!

Does anyone know if I could edit the sample and hold on the input voltage to work as a track and hold to allow slides?

Edit: maybe setting pitch = input[1].mode = ‘stream’? I will try in the morning but I’m pretty rubbish at scripting so not got high hopes

For those of you using Teletype/Crow using the retune command, have you experienced a limit to the numbers you can set each numerator/denominator to? I’m using a simple max patch to assign ratios to each voice—seems that any numerator or denominator greater than 128 doesn’t get read by JF channels. Even something like 256/128 which could be reduced to 2/1 doesn’t work. Not sure if it matters but I’ve got the INTONE knob fully CW.

the values are limited to 8bit (0…255) but perhaps something is interpreting it as a signed value which would be (-128…127). that’s by design. i know there’s some classical just intonation ratios that use larger numbers than this, but in practice there’s a minimal difference to the nearest ratio in 8b/8b.

The Teletype operator is casting the JF.TUNE inputs down to unsigned 8-bit integers (0-255). Therefore if you’re hitting a cap at 128 it is internal to the Just Friends, as Trent hints above.

is there a way to do pitch bending when you have JF in synth mode, controlled by norns (cheat codes)?

From the Just Type Github Internally each voice contains a linked sinewave oscillator providing frequency modulation over the function generator. FM index (ie. amount), is controlled with the FM knob & CV input. The knob functions as normal with INTONE-style modulation CCW, and uniform modulation CW. FM CV input is a traditional CV-offset where positive voltage increases, and negative decreases modulation. The frequency relationship between the modulation & carrier oscillators is set via the R…

this thread had some excursions into pitch bends from TT/crow, but short answer is no, smooth vibrato isn’t possible. but maybe you can augment cheat codes to do some wonky pitch offsetting like mentioned here