I’m having what may/may not be an issue with a Mangrove I picked up used recently and ya’ll seem to be pretty knowledgeable, whereas I am new to Eurorack and only sort of know what I’m doing. While messing around with my Mangrove, I came upon a dead spot with the knobs positioned as shown in my attachment. It’s just silent. 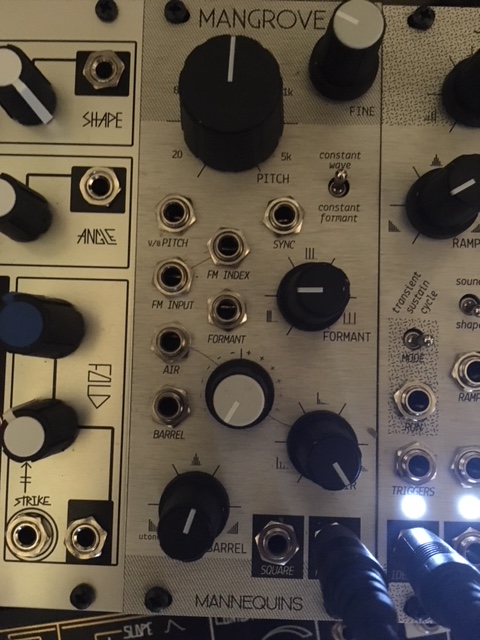 I’m just droning the Formant out into a Optomix and out to my mixer, no envelopes or anything else. I’ll get sound back if I turn these knobs individually, but leave everything else like the picture:

Is this normal behavior or did I get a dud? I’ve emailed Mannequins, but I’m sure he’s busy with whatever W/ is (WHAT IS IT?!) Thanks in advance.

Update: So, yeah, that’s by design. Thanks to everybody for their advice.

This is normal yeah, once air goes CCW past noon it starts heading towards silence. If you turn that CW sound comes back right?

Thanks for your reply. I have Air completely CW, so I figured it’d be louder if anything?

Think of Mangrove as a pulse generator rather than a standard VCO. Pitch controls how often a pulse is triggered. Formant sets the width of the pulses (lower = longer). Barrel sets the shape of the pulses as panel graphics indicate. Air sets the amplitude of the pulses with some progressively harder clipping.

One consequence of this behavior is that Mangrove’s output often has a strong DC offset.

The mode switch controls whether Formant width scales with Pitch. In constant wave mode, your per period waveform will be identical. In constant Formant mode the width of the pulses are unaffected.

Now here’s the special Mangrove flavor: If the falling edge of a pulse intersects a steeper leading edge of the next pulse, there will be a Formant width multiplication. Yum.

I don’t know if this helps you. I’m not sure I understand your problem… maybe post a video?

Yep mine does this too but I think that’s related to the undertones you can get with Barrel and Formant CCW past noon. Pretty sure the pitch is just turned up too high for any sound to pass through, if you turn Pitch all the way to the left you should hear a low growl.

Thanks, good to hear it’s probably just me! I didn’t think I heard anything regardless of pitch, but I’ll try it out when I get off of work.

I think I’m following you. My problem (which doesn’t seem to be one according to the other poster here) is that I thought Air would simply act like a VCA, and since it’s wide open CW, I thought it should be louder if anything. But it just didn’t seem to be outputting anything at all in the knob configuration I had it in, regardless of the mode it was in or the pitch. Otherwise, yeah, sounds awesome. I can try posting a video later just be to sure, but I’ll make sure absolutely nothing is going through at any frequency as Abarsotti suggested. Thank you very much for your reply

Yeah, sometimes the combination of these knobs results in in-between spots. I would try continuously sweeping through things like Formant, Barrel, with Air turned all the way up to hear what folks are talking about. IT’s a very unique sound!

I feel like the only “in-between” spots on Mangrove are on the Formant knob where it is possible to get chaotic behavior when you have it perched right on the edge of a division.

Amplitude should continuously increase as Air goes CW until it starts clipping. However! Formant and Barrel can both affect amplitude if you’re not in the “uTone” Formant width division regime. Instead of width divisions, the pulses overlap each other somewhat and end up trimming the wave asymmetrically.

Thanks again! I tried watching that video to see if my configuration came up, but since it didn’t, I started to figure it was probably me. I’ll try going through the video with my Mangrove in front of me tonight to make sure everything lines up.

The official video that Whimsical provides is also a pretty great resource if you haven’t seen it already. In the first minute or so it shows Air going from driven amplification to silence.

Digging it and the rest of the Mannequins line up so far though.

Yeah, I’ve only watched that video about a dozen times over the past few months and never noticed that

Ha yeah they’re kind of fast-paced and information-heavy videos, takes a few times for me following along to understand everything that’s covered.