I know this isn’t the typical thread on here, but I figured I’d see if anyone has any idea what the problem is.

I just picked up a Sterling ST69 and the shockmount seems to be barely too large to fit on any of my mic stands. It slides over the screw mount as it is just millimeters too large. It’s not a European adapter issue as it came with one and that slides in and out of it too. Anybody have any idea what the issue could be (or better yet, a solution)? 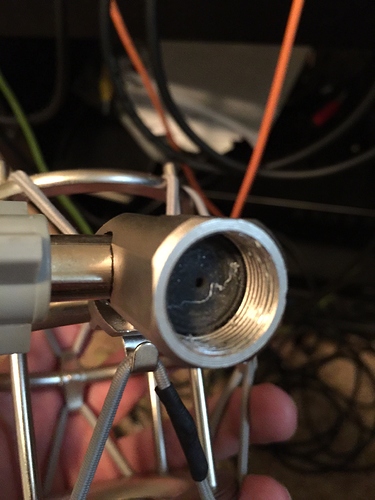 No idea what size this is, but if it’s too large for an adaptor, why not epoxy an adaptor in? That way it’ll work with any stand? Alternatively drill through the outside to hold the adaptor in place with a mole screw?

You could just take a single piece of gaff tape and wrap it around the mic stand threads.

If it’s just mm to large, that should allow it to sit. Not great if you’re playing out with it, but for recording it should do the job.

edit: plumbers tape may actually be better since its like meant for that

Thanks for the reply! I actually tried plumbers tape last night to no avail. I ended up ordering a $9 sterling mic mount (non shockmount) that has the same end piece on it. I figure I can just swap them and it should work. If not I at least have a mount until I feel like dropping $40 on a new shockmount.