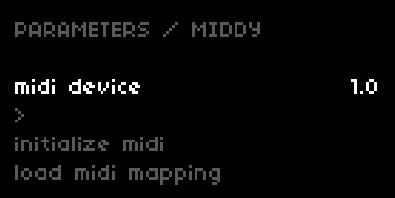 note: this is a library “add-on.” to use this library you will need to incorporate it into an existing script by adding two lines of code (see Documentation).

this script add-on is something i’ve found very useful to add some extra functionality to midi devices while within other scripts on norns. i made it specifically for using with oooooo and otis but it should work with any script by adding two lines into the init() function of the script (see Documentation).

middy is similar to MAP on norns. the MAP already does 95% of what middy does. so what does midi do? middy does two things:

maybe in the future middy will do more things. but right now its very useful for me, and - though i don’t think most people will find it useful - possibly one other person might find it useful too.

to get started, add the following to any norns script, usually in the init() function:

(see oooooo code for another example). this will add a new menu called MIDDY which you can access the functionality. there are two main functions described below.

middy lets you map any number of midi inputs to any number of internal parameter in a norns script. the real power here is that, unlike PSET, here you can map a single midi input to multiple parameters.

it uses a config file written in JSON syntax. when loading the config file from the MIDDY menu you will have access to the the midi mapping from your device. an example of the syntax is below.

or alternatively you can start midi with the filename

to set those commands to do something, you need to create a middy config file file. a simple config file might be like this, which simply toggles the compressor on/off:

in that example, anytime a MIDI cc of 58 comes in, it will turn the compressor on/off, by toggling between the data values. the button directive indicates that these commands are only activated when the midi value comes in as 127 (and it ignores values of 0).

if you leave off the button directive, the commands will act as a slider. by using the datas directive it will map the 0-127 input to one of the discrete data in the array - either 0, 0.5, or 1:

if you include the bounds instead of datas, then it will map the 0-127 input continously. in this case it needs to be triggered anytime cc comes in, so leave button as false, or don’t include it at all:

in the case above, any midi input will be mapped to the compressor mix at a level between 0.2 and 0.9.

the nice thing about middy is that you can easily chain MIDI commands. for example, this will extend the previous example to toggle the compressor on and turn the compressor mix up to 1.

the "data" directive tells middy to send a single data no matter, whether the compressor is toggled on or off as before.

for repetitive things you can utilize the X notation:

in that example the count is set to 6 so it will repeat 6 times and replace the X by the current count (1 through 6 here). on the first time it will start at cc of 0, and each time it will then add the add (1) to the cc. so this code will affect ccs 0-5 which target parameters 1-6.

middy is also equipped with a single basic midi looper. it basically lets you play a midi loop directly from any script in norns. to use it follow these steps:

Contribute to schollz/middy development by creating an account on GitHub.

woahhhh freaking brilliant idea. i love the idea of using JSON as config

oooh this is very nice, thank you. will try it out this morning

This is a sneakily cool project. A comment and a request:

Question - can this also route MIDI notes to parameter values? Or is it limited to CC only?
Request - you currently allow a one-to-many mapping of CC to parameter, but would it be possible to go the opposite way? e.g. only allow CC X to change parameter Y if CC Z has been passed with a value of 127

Hey @infinitedigits, like @StirHouse i was also wondering if it is possible to use midi notes to toggle things on and off with middy.
I really want to map buttons to recording on/off in oooooo

i’m actually curious why json was chosen vs. just using lua itself, ie, storing tables? lua is very commonly used as a config language, so what benefit does json offer here?

what benefit does json offer here?

I think I used json because it was much more familiar to me. that might be a benefit for some, but definitely not for all. lua might’ve been more seamless but I was still acquiring familiarity.

you currently allow a one-to-many mapping of CC to parameter, but would it be possible to go the opposite way? e.g. only allow CC X to change parameter Y if CC Z has been passed with a value of 127

sorry it took awhile to answer this. this type of logic is not possible here. its too bad I didn’t do this project with a lua-type config, as then it would be pretty easy to add logic like this…

thank you. I’ll see if I can figure out how to do that.

now that i’ve learned more about tables i’ve come around to the lua side. when i first learned i was having trouble setting up multi-dimensional tables in way that looked terse and clean. i’d do it all in lua now.

Hi @infinitedigits this looks useful, thanks for sharing!

Is it possible for the MIDI recorder to record internally (ie record the output of a sequencer script in which it is included?).

Has anyone tried this script in the current Norns environment? I’ve been trying to get a simplified version of it working as part of a script I’m working on, and found it to be quite “laggy”, and also prone to randomly stopping working.

I haven’t had time to investigate more fully, but wondered if anyone else had experienced similar issue.