MIDI controller routing from one Norn to the other (OhmRGB)

What are my options for a stable routing of a few MIDI CCs / Notes from one Norns to another.

I have an OhmRGB which has lots of knobs and buttons with an A / B section kinda which would be fantastic to control two Norns. 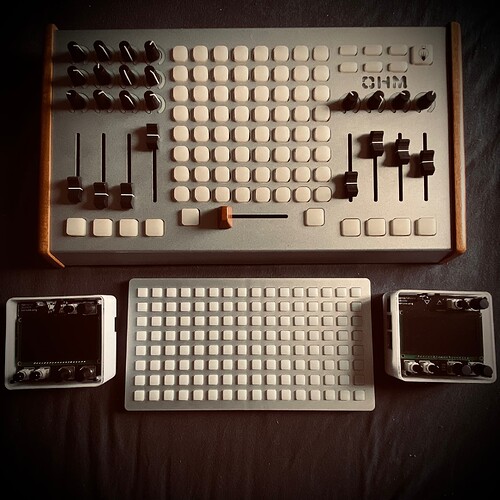 I guess OSC would also be an option? Maybe there are already Mods for this?

How would you solve that? Thanks for your input!

The OhmRGB can only interface over USBMIDI with one of the norns.

But… You could use the DIN MIDI out from the OhmRGB thru a USBMIDI adapter ($10-15) to the second norns.

I hear you – but you know how clunky those MIDI to USB cables are. I was hoping to use a network protocol for less setup time and cluttered cables (I hate cables!).

Of course this is my workaround right now that works out of the box.

Option 2 - use a host to host adapter between the 2 norns, and forward the MIDI you want along to the second.

(would require a bit more scripting on the first norns or using passthrough - which might be a mod now?)

I see… thanks for ideas!

I've been thinking a lot about how the mapping function works on PARAMETERS, so …I just wanted to collect some reflection here in case it's helpful. if this feels like noise, just lmk. ### multi-map - _current_: re-mapping a control to another parameter removes it from its prior definitions - _proposed_: map many parameters to a single control - _challenges_: provide user a way to quickly un-link the control from all mappings ### translate delta changes for foot pedals and other devices which send fixed-extremes - _current_: any device which sends 0 and 127 as the only two CC's cannot call anything besides a parameter's extremes - _proposed_: add a "delta" mode which allows a user to define what fixed CC value their device is sending and translate that to a delta message for the parameter <s>### range ([see this thread](https://llllllll.co/t/norns-param-map-screen/32352))</s> <s>- _current_: a mapped control will access the full range of the parameter</s> <s>- _proposed_: allow the user to refine the range of the parameter, so that (for example) a slider can focus on a subset of the parameter's values. could lead to really expressive control when combined with multi-map.</s> ### arc - _current_: an arc cannot control parameters unless the loaded script explicitly supports it or if the arcify library is used - _proposed_: unless a script defines arc interaction, arc could default to a mapping mode that allows the first three encoders to be mapped to any parameter. the fourth encoder could switch between multiple banks, so an arc could control up to 12 parameters across 4 banks (for example) ### crow - same as arc, but for crow. relies on multi-map. ### midi + OSC callback - _current_: if a user maps a controller that has LED feedback (thinking specifically of Midi Fighter Twister or OP-Z), LEDs do not display the loaded state. user has to turn the encoder all the way to the extreme in order to align the values. if a script sets params values directly, this decouples things pretty quickly. - _proposed_: provide a method to report relative parameter values as a "midi echo" back to the transmitting device on a specified channel, with a specified type (CC, note on, etc), mapped 0-127. this would also open up a potentially dumb but fun-sounding creative opportunity to map a parameter's changes to MIDI notes lol - _challenges_: this might be too niche, but could be a nice MIDI QOL improvement

What about this? Looks quite promising as well, eh? @dan_derks You are doing the main implementation, right?

Maybe OSC as input would be awesome

would require a bit more scripting on the first norns or using passthrough - which might be a mod now?)

indeed i have made it a mod!