I was on the Blokas site just a few days ago and didn’t notice this. Anyone know if this is new? It’s a MIDI FX unit and game handheld? 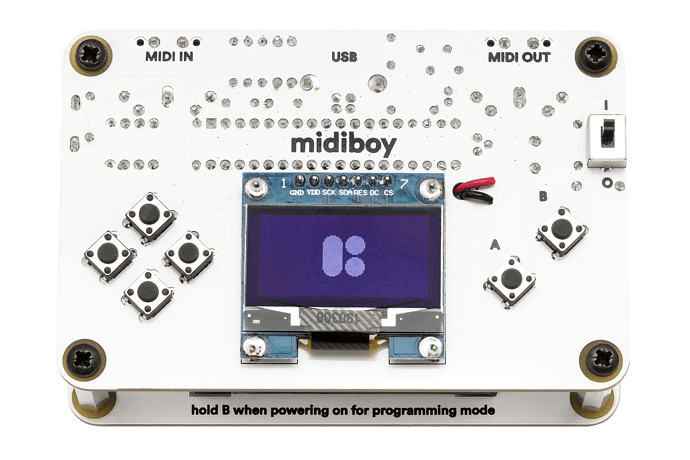 It is new, I think the story is that this started as a simple MIDI utility, but when the developer noticed that the Arduboy open source handheld (https://arduboy.com/) was using the same or similar hardware as what was planned for the MIDI boy, they designed it to work with Arduboy games as well.

Agreed! It’s interesting they’re showing this off before releasing Midihub

Ahh, I saw they forked that project on Github a little while ago.

its not been released yet…

but Ive got one as a kind of ‘beta tester’ - its really cool!
currently there are a couple of apps, the primary one being a midi monitor tool which is very handy,
but you can also easily develop your own, so as you say midi fx should be simple enough.
as you can see, it has a midi din in and out, and also it acts as usb midi device - so could act as a bridge - or do all sorts of interesting things e.g. generator midi?

i think midiboy is going to be a diy build only (not sure though) , but its very simple and quick to do - iirc took me less that an hour to do, and the instructions were simple to follow.

not sure on release plans of either,
I guess midiboy is easer, as its simply a kit…
MidiHub is very stable, though they just added a few more features to the software - so perhaps they were waiting for those before release - but really don’t know.

but yeah, blokas having been doing cool stuff… e.g. releasing Patchbox , and lets remember they are behind patchstorage.com too… so really ‘giving’ to the community

EDIT: ah, just noticed they’ve put it on the front page …
so i can also say, indeed, its also working as a controller for Orac, when Orac is running on the rPI

The Orac controller functionality looks great. I’m waiting on a Pisound right now and was trying to brainstorm a good way of controlling Orac on the Pi once it’s all up and running. This might be a fun one to try!

As @DMR mentioned, Midiboy started out as a personal project for MIDI debugging by @Giedrius and after some time using it we decided to expand the hardware thus making it more like a “platform” for different types of projects, a client for the @TheTechnobear’s Orac is a great example. Regarding Arduboy, it has a bit more powerful microprocessor, but most of the games don’t require any changes.

@wipeyadocsoff, as Blokas is basically a team of two with lots of different ideas we have to/choose to work on multiple fronts simultaneously. Midiboy reached the release stage earlier, so not sitting on it and releasing before Midihub makes sense (yup, you can already order one on our website), especially as with every additional unit sold we can afford a bit more help from outside thus allowing us to progress faster.

We will be creating more sketches for Midiboy as we move along, if you have any ideas for, e.g. MIDI effects you would like to see ported, let us know.

Hi Blokas team! congrats on the releases! i just placed an order for midiboy