Has anyone tried running Eurorack level signals directly into a MOTU interface?

Thanks, good to know!

Another vote for MOTU, as far as i’ve seen there’s nothing else on the market that beats the I/O they offer for the price they charge.

As for which model to recommend, it really depends on the connectivity required: The 828es seems to be the best jack of all trades model, but the A16 might be better if one wants more 1/4” I/O etc.

looks at the prices

I’m using UAD’s Apollo Twin with external preamps over SPDIF & ADAT(Depends on the pre’s I use). Gives me up to 10 inputs. Would highly recommended investing in a interface that has ADAT if you plan to mix in the box.

Another option is the Keith McMillen K-Mix if you want an interface with more of a “mixer” feel - lots of folks around here use 'em.

The downside with the Ultralite is if you regularly want to use it as a standalone mixer: you can do it, but it isn’t super fun if you’re not controlling it from a computer in my experience since you need multiple encoder clicks and movements to adjust signals.

Regarding the MOTU ultralites, what is the difference between the MK3 and the MK4? They look pretty similar. Does anyone have experience with either one and is either clearly better than the other?

I also use an Apollo Twin (mk2) with an adat preamp (Behringer 8200ada) unit for my main recording interface. I switched from using a MBP to a Windows 10 laptop this year, which required me to buy a USB-C to Thunderbolt apadter. It works flawlessly.

I also have a Zoom L-12 for a live mixer/recorder which I keep next to my modular to use a continuous sketchpad. I eventually plan to use it when I finish my live set, but it’s a little bigger than I would prefer. I originally bought a K-Mix to serve this purpose, but I could never get their drivers to work with Windows, and their customer service was not at all transperant or helpful. The upside is the Zoom has some pretty nice sounding reverbs & it can send up to 5 separate stereo busses out.

I posted in another thread that I recently got the MOTU 828es. Initial impressions are really positive:

As an update to the recording question further up, and this should probably go in an ‘audio interfaces’ for modular thread that I can’t find.

I succumbed to my gear lust and got a Motu 828es as an upgrade on my previous interface. Initial impressions are great: I’ve set it up as a ten channel input into Logic and mapped the Reverb aux as well as a separate stereo channel, which is cool. I’ve also put some DSP fx on the inputs - hi pass, gates, light compression - probably sacrilege to alter the sound going in, but I find it pretty helpful. The two inputs at the front I’ve got permanently wired to a mic and a guitar lead, so I can really quickly add these parts when I think they’re needed.

It’s a bit of a move into a more professional piece of gear and has a price to suit - but I’d recommend as a recording solution for multiple outs from a modular.

In terms of mixing - there is a web application optimised for tablet - I’m not 100% sure if this works standalone though or if you need the Mac connected by Thunderbolt as well. Not sure why this would be the case, but the manual seems a bit ambiguous on this point.

The MK4 loses the firewire connection and gains ADAT I/O. Not sure how different they are otherwise…

I found this useful guide for novices in the audio interfaces world: https://www.musictech.net/2017/08/essential-guide-audio-interfaces/

Most of you will probably not needed, this is for those like me who needs to get deeper into this

Yeah, it’s expensive and you could probably fill a 416HP euro case with the greatest modules for the same price as a filled up 500adat. But still, it’s modular so you can take your time. There are often good deals on 500 series modules on eBay.

If you have, or are looking at an ES-8, what I do is pipe it via ADAT into the back of a ……… MOTU Ultralite AVB. Very handy.

I’ve got both the Ultralite Mk3 Hybrid and now the Mk4.

I’ve had the Mk3 since 2011 and it has been a great interface on Mac via Firewire. My experience using it via USB was bad, lots of audio hiccups when processor usage became high on the host computer, or when other USB devices were under heavy load(lots of USB MIDI controllers and an external hard drive). Via Firewire, it was rock solid audio-wise.

The reason I upgraded to the mk4 is that since macOS Sierra, if I let my computer sleep while the interface is powered on and plugged in via Firewire, I will get a kernel panic. You can see mine and other reports of that here: http://www.motunation.com/forum/viewtopic.php?f=2&t=62567
I believe this issue is caused by changes in macOS with regard to Firewire and is unlikely to be fixed due to macOS dropping support of Firewire.

The Mk3 can be bus powered, but the Mk4 cannot(this was a surprise to me). The Mk4 has a MUCH brighter blue LED backed screen with no brightness control or ability to turn it off. The screen is beautiful, but very bright. The audio routing of the Mk4 is much more in depth than the Mk3. The Mk4 has a full routing matrix with no limitations. You can even output the entire stereo mix back into a channel and get digital feedback, which can be fun and useful if you want to create some weird effects. The Mk3 mixer channels can be controlled from the front panel with lots of knob twists and button presses, but the Mk4 is not granularly controllable from the front panel. You can only change the headphone and master volumes, choose mixer presets and control the volume of the front two XLR - 1/4" combo jacks via the front panel of the Mk4. The web UI for controlling the Mk4 is much nicer than CueMix on the Mk3, and I can control it via WIFI on an app from my phone.

The Mk4 is not very good at accepting a different sample rate than the one it is locked to. This results in a multi-second pause while the machine switches to the new sample rate. I never experienced this on the Mk3. Similarly, I’ve also experienced some issues where the sample rate change has caused the audio device to disappear from the Sound output menu on my Mac and I’ve had to reboot my computer and the device to get it back.

Another thing to look out for: There are two versions of the Ultralite Mk4. Before 2018 they were producing a version without the ESS Sabre 32 DAC, but as of the beginning of 2018 the box and product description has been updated to show that the machine has an ESS Sabre 32 DAC. I have the ESS Sabre 32 version. You can find reference to that change here: https://www.gearslutz.com/board/music-computers/1148240-motu-ultralite-mk4.html

I’ve seen reports of people getting old stock versions of the Mk4 which do not have the ESS Sabre 32 DAC, which is something to watch out for. The reports on reviews of the pre-ESS version of the Mk4 seem to be worse than the more recent reviews of what I assume are the new ESS versions.

Here’s the original box without the ESS DAC 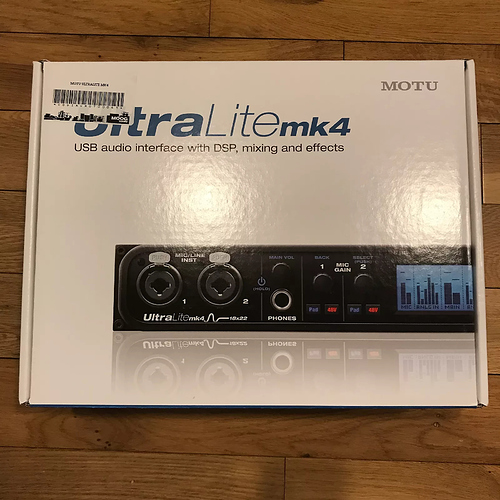 Here’s the box I received with the ESS DAC sticker: 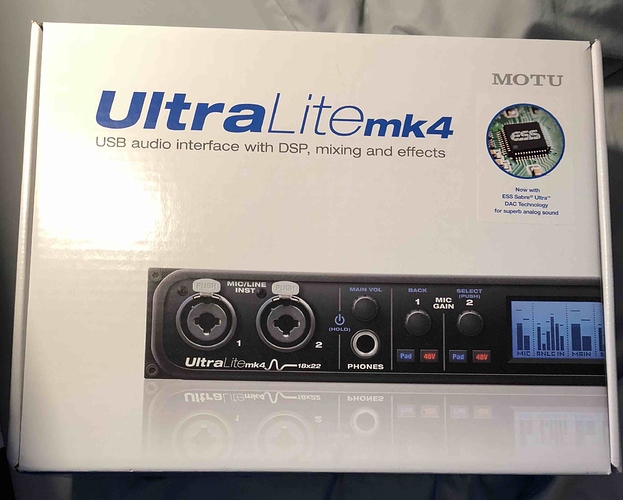 Anecdotally, I think the ESS DAC in the Mk4 sounds a lot better than whatever DAC was in the Mk3.

Overall, I love the Mk4 for its sound, price:features ratio, and the freedom of the routing matrix(something I always wanted on the Mk3), but I’ve felt like it has been quite a bit more fiddly than I’d like. I had some initial reliability problems with the Mk3 in 2011-2012 as well, which were eventually fixed by OS, firmware and driver updates, and I hope for the same with the Mk4.

The reason I upgraded to the mk4 is that since macOS Sierra, if I let my computer sleep while the interface is powered on and plugged in via Firewire, I will get a kernel panic. You can see mine and other reports of that here: http://www.motunation.com/forum/viewtopic.php?f=2&t=62567
I believe this issue is caused by changes in macOS with regard to Firewire and is unlikely to be fixed due to macOS dropping support of Firewire.

Good to know! I’m planning on picking up a new mac soon and have been debating getting a new soundcard vs using a firewire adapter with my 828mk2. Looks like that won’t be an option.