The circuits have icon-like representations for each of the components, and there’s an image file that is mentioned in this thread I believe that is a “key” to decode what they are.

Once you know which components are represented by which icon, it’s just simple placing and connecting everything! There’s also a Facebook group called Ciat Lonbarde Paper Circuits Troubleshooting that’s helpful as well.

I built one of these for my Rollz. It’s the power supply for the older kitten-nettik machines: 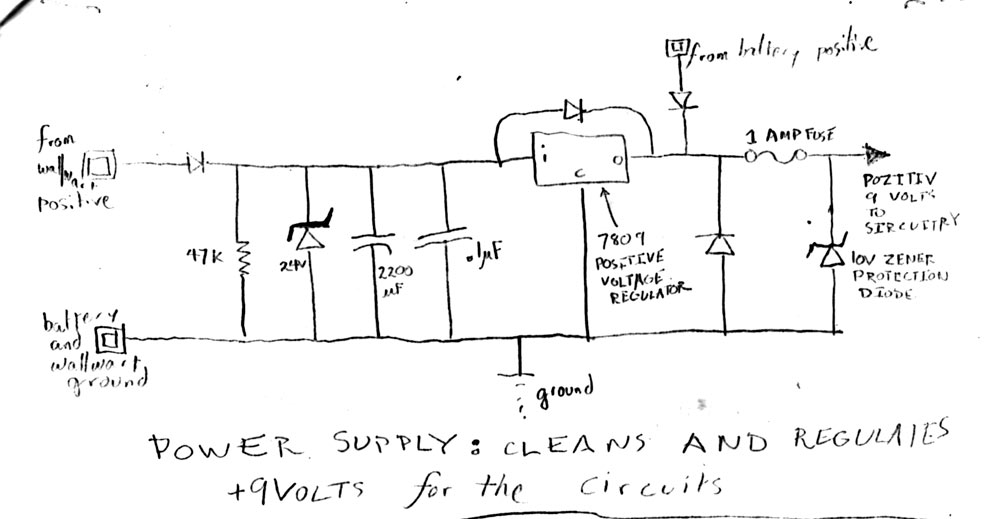 (scanned from the documents that came with them)

And for the physical power supply, the bugbrand ones are really great. (they are sold via Patch-Point, but I bought some directly from Tom)

This is a very similar circuit to what @Rodrigo posted:

power_strip1263×490 86.9 KB
I’ve built it to power my “Mini Rollz” that I’m building with PCBs from @mlogger, plus a few circuits I’m building myself: a “Labrolz” (tempo adjustable rolls like on Plumbutter, but not CV controlled), a shift register (half a Bugbrand DDSR), a noise based snare and a mixer. I’m incorporating all the mods that Pugix details in his blog.
“Linear” is a voltage regulator. I’m using a L7812 for 12v output, and powering it from the 15v DC wall wart that shipped with my 0-coast.
The big cap in the middle is a 1000uF, the other electrolytics are 10uF, and the non-electrolytics are 100nF.
The rectangles are connectors. I use JYK ones.
The blue lines are the strips on strip board, and the red lines are connecting wires.
The LEDs are for diagnostics. The left shows power to the input of the voltage regulator, the right shows power after the voltage regulator.
X’s are cuts on the stripboard.
7 Likes
icecreamed March 26, 2020, 5:48pm #1131

hey,
Im wondering about fourses (the mobenthey stacked oscillator)
and was hoping somebody here is somehow experienced

i had a play with one of those and liked its crazy loco attitude, but now im wondering if i could also use it as a normal osc…
i dont even know if it has something like a v\oct input
somebody know or could tell me how it behaves playing some (more regularish) melodies?

Oh man, when I got to play with Fourses for half an hour I was floored – such a fascinating and wild module which made the Random*Source oscillator go mad. Yet somehow I feel that 1v/oct tracking is not its strongest suite and it mainly shines as a crazy modulator (sorry, probably not the most helpful comment but here’s my 2c anyways).

Hi I posted a new Ciat album released today for anyone interested. It’s a free download and 100% Ciat made

finished what i had on hand to build

a few more rolls, gongs, and the conrad papers things 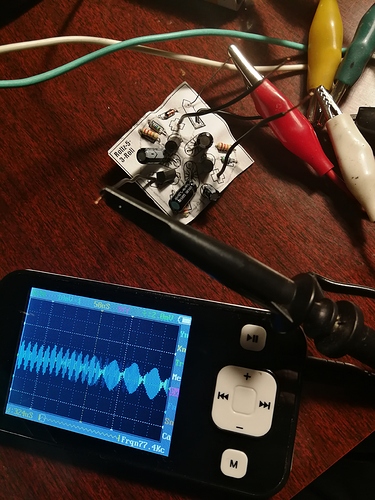 Built the simplest Rollz from the Rollz-5 paper circuits. Its doing… Something? Now to connect it to something else and find out what

Does anyone use other banana synths (i.e. Serge) to modulate the Sidrax organ?
@mlogger, ever experimented with this?

I’m using BugBrand CTL1’s, a SEQ1 and squarewave outs from a SYN1 weevil on my sidraw which contains an original sidrassi board. Works fine, even going down to -5v with the oscillators (which are -5/+5v peak to peak), although it’s not recommended to put any negative voltage into the CL synths.

Has anyone attempted a cleaned up schematic of the man with the red stream module from plumbutter? It’s the one that I’m most interested in but I can’t read the labrolz papers ha

I was just now using the Sidrax the other way around, to modulate the Serge. It’s fun to make automatic patches touch sensitive.

I’ve gone the other way round used the Sidrax, Tetrax as touch controllers for the Serge / Buchla and it works great. Cocoquantus is great for this also. There’s some videos on YouTube of people doing that.

Has anyone sequenced a Coco loop via the speed CV input? I’d love to shift the loop with something from outside cuz sending anything from the quantussy just makes a mess.

Yes, a Serge programmer or MQ Voltage Memory work great for this.

breadboarded up the cv controlled rollz and it was a success!

however, the potentiometer seemed to have little to no effect. could just use bigger capacitors or a a different pot, though? The caps I used were 4.7 and the biggest pot I had around was a b500k. Has anyone else tried this build and had success with different combos? I’m hoping to be able to have a range between like 200-50 bpm (maybe this is a tall order for ciat stuff lol - how about fast to pretty slow?) heres a video!

@laihalll I just happen to have a voltage controlled rollz on my breadboard at the moment!
I get between 18 BPM (0.3Hz) to 780 BPM (13Hz). So, a very wide range of possible tempos.

I’m using a B10k pot. The pot size doesn’t matter too much as this circuit is voltage controlled, not resistance controlled. A pot just acts like a voltage divider in this case.
What are the units on the caps you are using? I’m using polarized electrolytic 4.7uF caps.
Finally, how are you driving the LED? If you’re just connecting it straight to the roll output then it will discharge the capacitor and you’ll get a very short pulse for that output.

I’m currently working on a stripboard layout, getting bogged down in making it small enough for the (silly) self-imposed size limits I’ve put on the design myself.

I’m using the ken stone driver from the labrollz papers

4.7 polarized yup! I haven’t had a chance to sit with it again since about 4:30 this morning and I’m
Pretty sure I didn’t add a pull down resistor to the second transistor after the potentiometer one

It sounds like you’re doing the exact same as me, so there must be a mistake in your circuit somewhere!

If the pull down resistor is missing then the voltage will be floating, and you’ll get fluctuating tempos as well as the pot having little effect.
If you can’t find the error then post it up and I’ll compare to mine.

Successfully built and added to my ciat machine

I made another set but used 470 uf (!!) caps and loved the effect - it’s super slow which makes the cv that much more interesting