Awesome! I’ll order some 2073s on ebay (will get a few extra if anybody around needs some)
I’ll have to find another way for the inductors, the shipping was way too high for just a few parts on Arrow.

I am so damn excited to get these in my little IFM rack.
I wanted to make it as a partner for my Fourses, Denum, and Dunst. - I REALLY hope to own the few others as well, and then onto duplicates hehe.
The one I am most interested in getting is Sprott. - I think EuRolz would play great with it.

That looks great! Shame you won’t be selling any

It’s mostly the fact that this Forum is not a Sales Platform.
I do not want to lose my ability to Post in this wonderful community because the Thread becomes flooded with people saying - can I buy can I buy - etc.

I just love ciat-lonbarde, and all encompassing entities within the mind of Peter Blasser - and I know other folks in here do as well - and we all love seeing what one another creates within this realm -
Just trying to avoid thread spamming and souring the admins opinion of me

@Rodrigo -
Lookie what I found on Meng Qi’s site!! 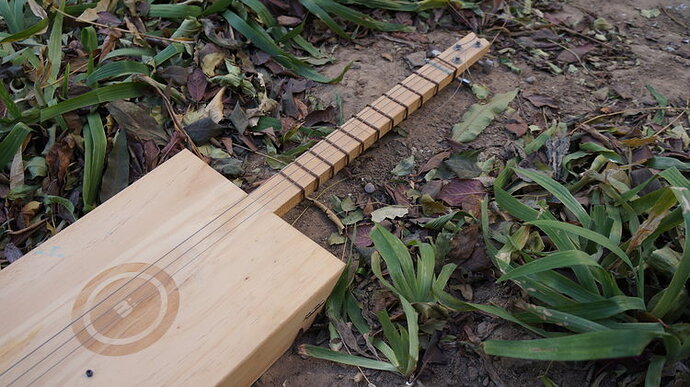 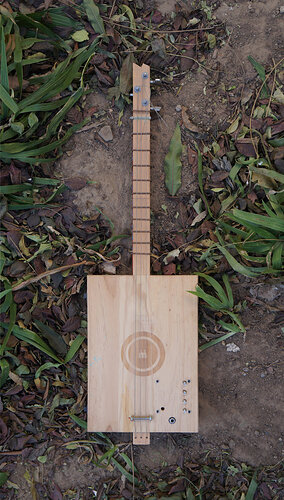 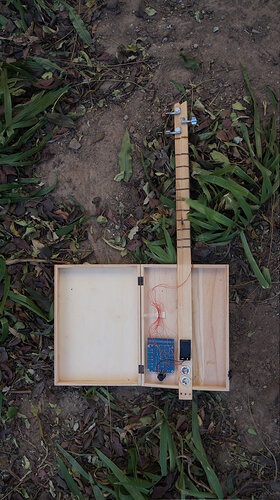 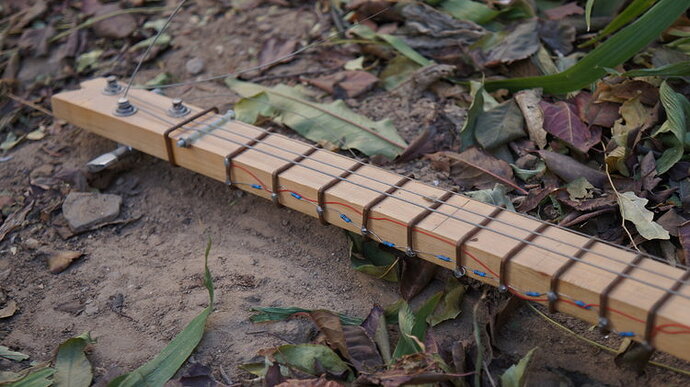 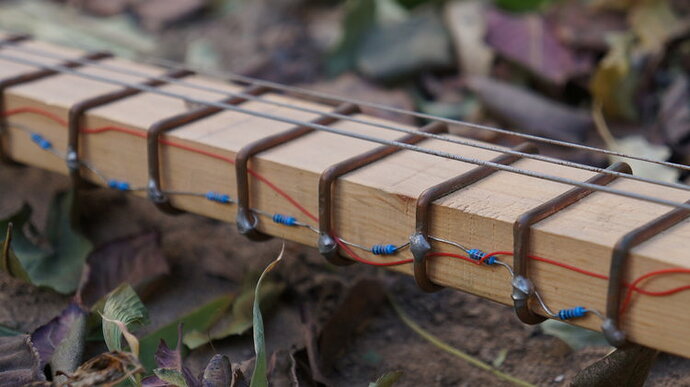 Would help if I was spelling it correct before… lolol - Namasitar (like a sitar…lol) but its Namastitar. LOL
derp.

I did the same thing back when I was making NOBSRINE. I kept calling is NOSBRINE. lololol.

I’m not a mod here, and I don’t know if you were told something specific, but my impression has been that the rule is not “no commerce on lines” but rather “no commerce on lines outside of the trade category”. So you could totally start a thread over in that category and then link to it from this thread.

Here are a couple examples that split “commerce stuff” into a separate trade thread, to show what that looks like:

[NEARNESS] a 1U adaption Tech

[IMG_2736] This is my take on the minimal panning mixer nearness by @billyhologram (thanks for sharing your design). Besides it being 16 HP 1U Pulplogic format, I added a second input for center position and the output jacks are normalised to a header to the back of the PCB to connect the output to other modules (originally planned for EXI[S]T but you could hook it up to a Mixup, Hyrlo or similar). I decided to remove the output level option but otherwise the circuit is identical to the origi…

Fates - a DIY norns DAC board for Raspberry Pi Tech

[IMG_1997] [8_top] Fates is a pcb add-on board for Raspberry PI 3 Model B+ and Raspberrry Pi 4 Model B that provides a stereo audio codec with headphone driver, 3 (or 4) encoders, 3 buttons, and a grayscale OLED display. It’s compatible with norns software and monome hardware (gird, arc). Reminder - This is DIY This is a Do It Yourself project and is not supported by monome. Please keep Fates related support questions in this thread. status Available for purchase as a DIY project - pcb-only…

I was told something very specific as I run a known Reverb Shop for ciat DIY PCB’s. 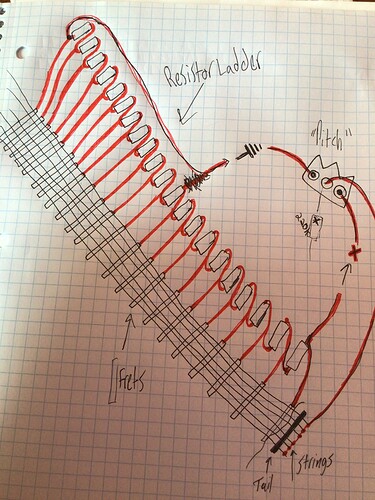 This is how his looks to be set up.

Yup, that looks about right.

So the “bridge” is “wiping” across the “pot” as you fret.

Look forward to seeing what you make of it. I’ve got a danelectro I modded many years ago with the intention of building a namasitar PCB into it, but it just ended up on the back shelf many many times over.

Recorded my NOBSRINE into my coco and made a video n such. - if you like higher frequencies, just wait til the middle 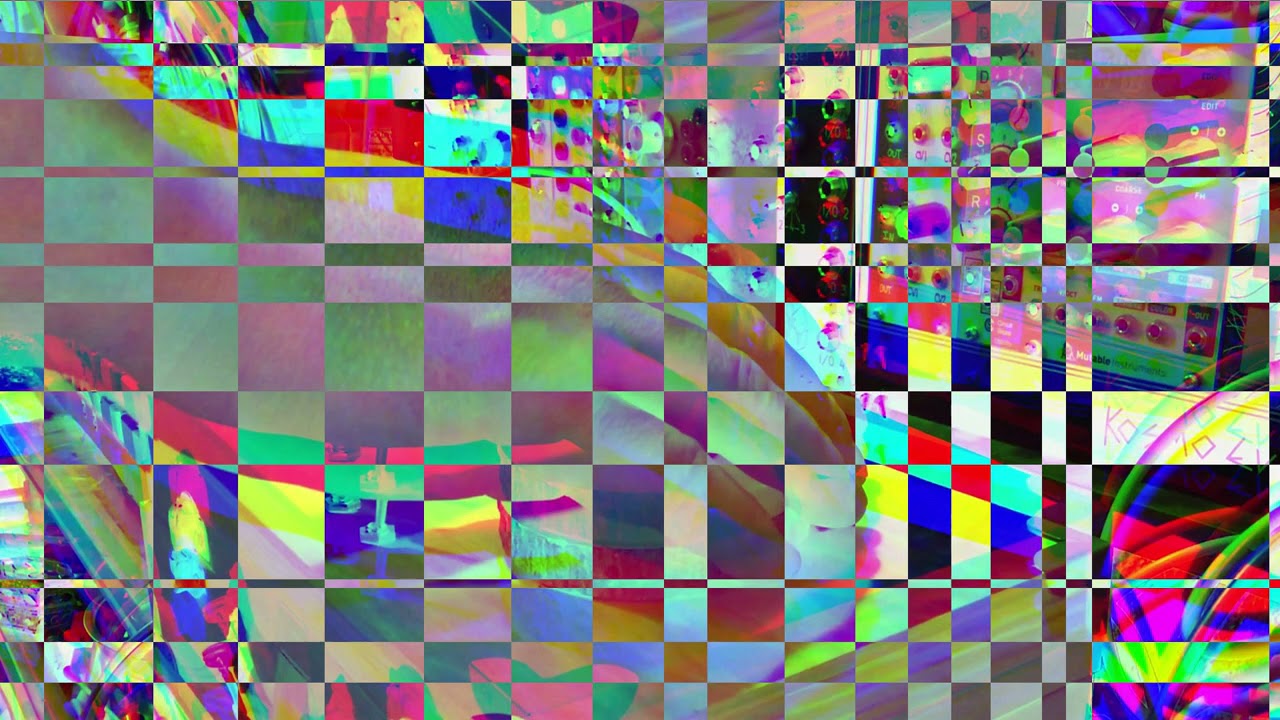 Very relaxing. I must be too old but I hardly heard the high frequencies.

Crazy - I had one friend only make it halfway because it made her tinnitus go nuts. lol
Thanks

^ make sure to read through this

Anyone here built a Meng Qi version of the APCS (or the original paper cirq)? I’d like to wire up buttons and bananas, but I keep finding myself confused with how to go about it. I drew up a very eloquent sketch which makes sense (to me), but thought I’d see about a consensus first.

@sbaio… can you chime in? I remember your version had both jacks and buttons… got any tips? 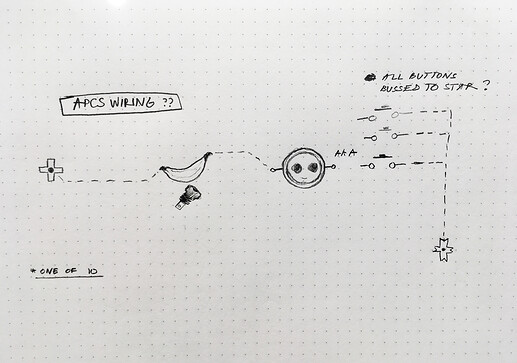 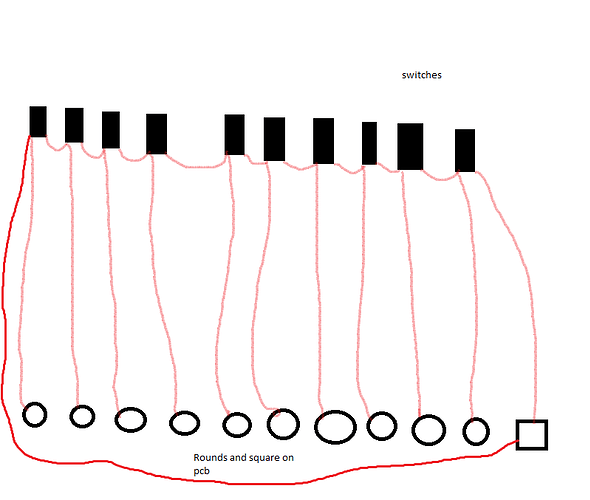 Would this work for the switches ? Still need to complete my Meng Qi APC also…Thanks for any help

Because I need visuals… this is my interpretation of a clever wiring scheme:

In the sheet for the original circuit, Peter says that connecting the cross nodes to the star will also connect all of the them together, which (to me) implies a bus connection after the button is activated. Not sure why I’m so hung up on this, as it seems pretty straight forward.

@Glitcher If I’m reading your diagram as intended, it seems as though you’ve created a connection from each node (or, switch/button) to the other, but not to the output, which will ultimately break the modulation connections unless they’re all activated simultaneously. Also, the first node on the left looks as though it would be connected to the output continuously, which would create a constant drone (could be cool if desired!).

That was a bit of a word salad, and I apologize. I actually just needed a reason to make a diagram with a man dancing on top of a cross node wearing a banana costume.

I used Peter’s standard paper circuit PCB for my build. I connected banana jacks to the 10 cross-shaped outputs and 5 banana jacks to the star input. The buttons are also connected to the cross-shaped outputs and to the star input. This way I can make a permanent connection by patching a banana cable or a momentary connection by using the buttons.

Because I need visuals… this is my interpretation of a clever wiring scheme:

That’s it! Just add a banana jack (or more than one) to the star-input, where you can connect the bananas of the cross-nodes.

That diagram is very helpful. Thanks for posting. I tried to translate a wiring diagram from the paper circuit I had and failed badly lol. One question though. I have some momentary switches but later bought some latchable switches. I’m wondering if you used all latchable switches wouldn’t that be similar to using banana’s ?

Latching switches should serve the same purpose as bananas, yes. The only “benefit” to using jacks here is the stackable, cross-patchability (with itself as well as other circuits).

Oscillator is a touch low - I believe this is meant to be plugged into an Amp, but it is late here so I went direct into my Interface. 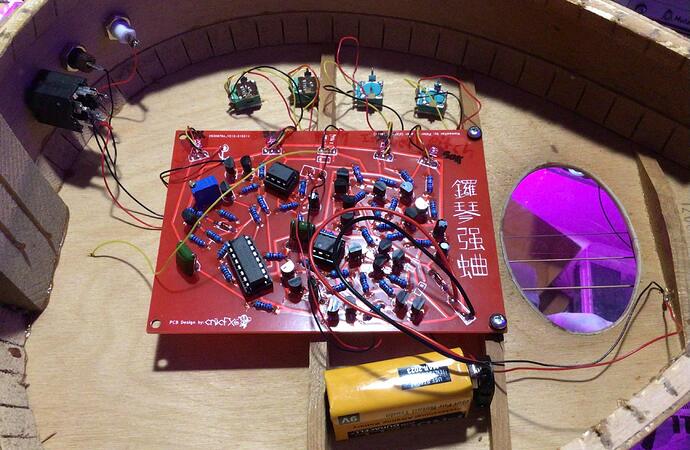 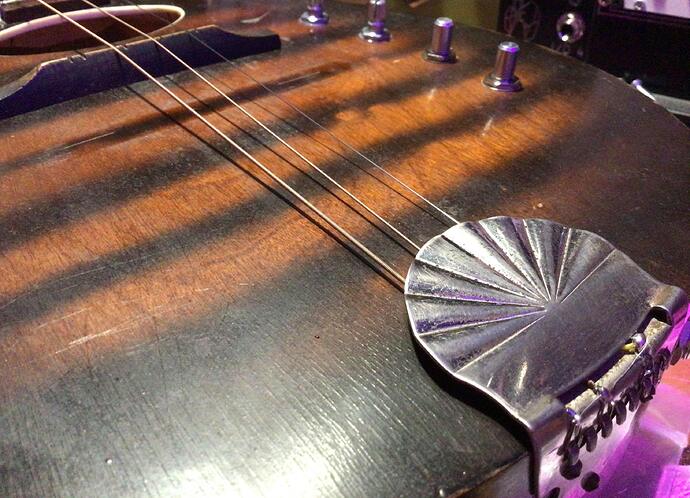 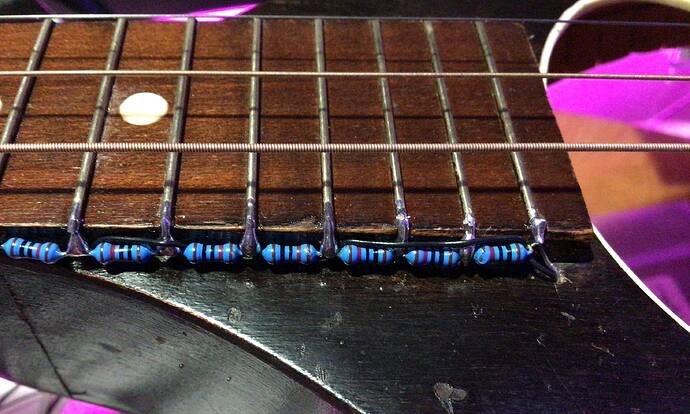 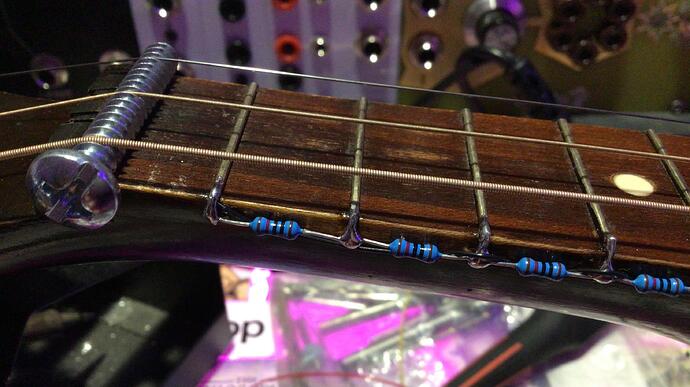 So there is a constant running oscillator that is adjustable and playable by touching the strings to the frets as your would with Meng Qi’s Stylophone version.
Plucks seem to trigger a nice Ring Mod, you can hear its “coo’s” in the middle of the soundclip.

I had fun building this.

I know absolutely nothing about guitars or stringed instruments, but I KNOW I will have fun with this in tandem with my coco. lol.