Let’s use this thread to discuss mobile (battery powered) modular setups. Here’s mine: 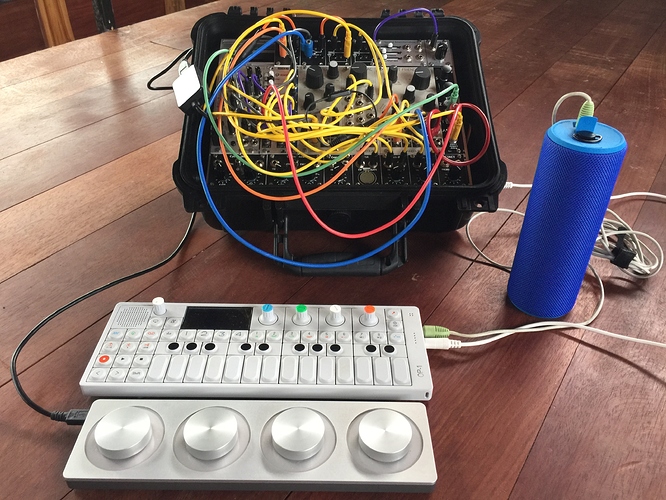 What’s between the Ansible and the uScale?

I love the idea of using one of those speaker pod thingies (the blue thing).

What’s between the Ansible and the uScale?

I love the idea of using one of those speaker pod thingies (the blue thing).

yeah it’s quite handy, and waterproof!

too lazy to do the maths myself

how long does the setup run continuously before recharge?
basically whats the range?

Just saw an ad for this (I don’t always keep my ad blocker turned on). Not cheap, but intriguing.

The one of the best powerhouse— the power bank is the bank of power because total capacity of 434 watt-hours of power, enough to fully charge a laptop up to 15 times.You can use the portable charger outside because it made for easy carrying. Four USB...

Advertised capacity: 434.16Wh. Not sure how to compare this to ravpower’s advertised 23000mAh capacity.

after about 2 hrs i’m hitting 85% on the ravpower

that’s about as long as i play before heading home or doing something else. modgrid has this setup pulling somewhere around 800ma last time i checked.

i should do a real test tho…

Just got this, planning to make a small portable euro fx box for my op1: http://c1t1zen.com/presta/home/9-usbpower-kit.html

Would anyone care to recommend some battery powered speakers? Just for indoor use.

I’d really like to get some Minirigs as they’re local to me, but they’re probably louder than I’d need (and a bit too expensive). And I think I’d rather get a single unit for stereo rather than have 2 separate speakers.

I’m always leery of tiny components tone-wise, but the tiny footprint is tempting. how is the sound of these? do you like them?

that is incredible
I appreciate the feedback

they sound nice to my ears. after a brief warm-up there is no tuning drift and tracking is good for 5 octaves. i was sold on the tiny footprint, sine wave (great thru wavefolders) & the fact that they are saw core. i also like how small the tune pots are, as i tend to remove the knobs from my oscillator tune controls so i don’t accidentally grab or bump them. certainly not exotic or feature laden, but they get the job done & bring enough character to make me happy. i can also confirm that they perform well as a mod osc with the doepfer a-110-4 on tzfm duties.

So which one of you weasels snaked the Trogotronic 168hp collier case thingy from Perfect Circuit?

i considered it, but ultimately felt it wasn’t right for me. the rails are mounted almost flush with the top - so in order to close the case patched you’ll need to remove the foam in the lid. even then i’m not sure stackables will fit. a shame considering how deep the case is. 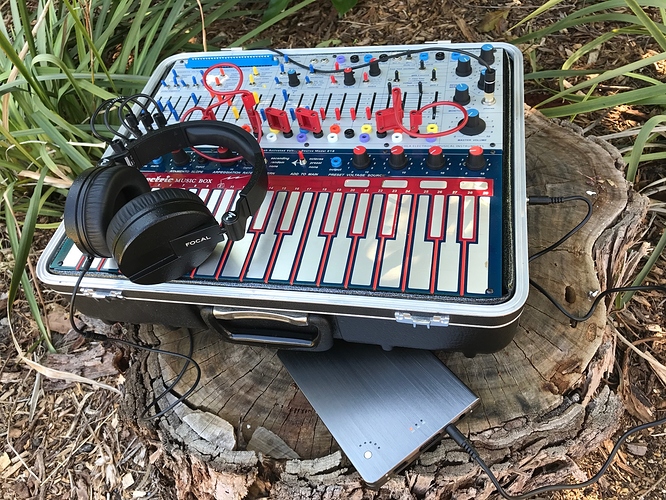 I’ve had this post about running an apple 2 on a belkin router battery backup bookmarked for a while – looks like there’s some super cheap used ones on ebay. Will euro power distro boards take 12V or is 15V required?

Did a Plein Air session yesterday, for over half an hour in hot sun. Battery pack still showed full!

Fantastic thread - I’ve just been considering this myself as a nice option for going to the park, sitting in the back yard, going to a friends place etc.

Has anyone in this thread tried plugging into a powered PA whilst on battery? Grounding issues? DI required?