A complement to the sequencing things other than v/oct idea is to send gates and even triggers to cv inputs. It is a good way to get harder abrupt changes into patches. I find it can give more modern “digital” type sounds from a traditional analog set of modules.

I’ve been trying to get into more traditional songwriting techniques using the modular. First I write a chord progression and record it into Ableton. The chords will be played by either a kontakt piano instrument or my Prophet Rev 2. Then I duplicate that MIDI track and turn the chords into arpeggios. From there I either send that directly out of my Mutant Brain module to one or multiple modules or I send it into Marbles with the external processing turned on. Now I have melodies that follow the chords. I think I need to fine tune this technique but haven’t come up with any specific tricks yet.

Extrapolate the chord progressions into well voice-led melodies rather than to arpeggios.

Now derive the sequence by reading vertically rather than horizontally:

(for contrast, I understood that your post, given the 2-5-1 in C Major input, would yield the sequences:

I’m anxious about 1: relaying something that was mind-blowing to me but may be obvious to you and 2: relaying the information in a way that does not emphasize the important parts of the approach (chords are stacks of melodies; melodies are not simply vehicles for chords AND use simple sequences; they’re more primed for live modulation).

I’m also sure you can see that, if you’re building your chords in more elaborate ways // with this application as an end goal, there’s a lot of freedom // it’s a lot easier to change the sequences to taste without destroying the whole piece (whereas changing arps can be tricky since they’re so… Crystalline).

I thought arps were the way to approach chords in modular, too, but then when I started thinking of it as an ensemble rather than a glitter box, it made more sense to tackle melody directly (even though it was scary at first).

Hello there, this is my first new topic. After searching for a similar discussion and coming up short, I thought I would try and ask for help. I would like to recreate something that sounds like a piano with my modular. So far, all I have is a quick attack and long release, but nothing else. Has anyone tried this before to recreate a piano sound with modular? I would appreciate the help very much!

Have you seen this soundonsound article? Might be a helpful start…

the higher notes are brighter on a piano, so sending an attenuated copy of the pitch cv to open up a filter is common technique when synthesising piano like sounds (often called key tracking or key follower on analog synths). also, having a separate oscillator with more complex harmonic qualities, with a shorter (short!) decay/release time to imitate the hammer hitting the string is a good idea. experiment with blending different waveforms to achieve the right harmonics.

Oh this is very interesting, tracking this thread for sure.

Here’s a lovely one I revisit often of Mangrove pretending to be a piano from @Catchthehare. 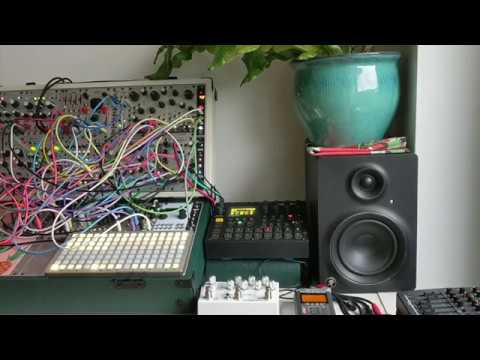 Beautiful! Are there any detailed patch notes? Below the video it is rather brief information

Ah thanks for that share, seems like that was from a lifetime ago! Yes I believe I was feeding it all into Echosystem and there must have been a couple delay modes in there.
But general patch was Mangrove → 3sisters → Optomix and Maths envelope, out to Echosystem. All played by Kria on the grid.

I’ll have to recreate this piano again, but I’ve been too preoccupied with Mangrove pretending to be a Saxafone lately