It’s never a “good” idea to plug headphones into anything not designed specifically for headphones - headphone outputs usually have large-ish capacitors to help drive them, or other such things. Some headphones tolerate bad practices better than others.

If you already have a small mixer with a headphone output, going from PicoDSP to that, then to headphones, would be fine, but if you want to use headphones with the modular directly, you really should have something with a true headphone output.

I’d also note that I personally wouldn’t want to be actively mixing 4 knobs in 10mm of width. If you mostly want something you can just set and leave, I’m sure it is fine, but often people are “playing” their mixers and making adjustments on them a lot, in which case something slightly larger would likely be more comfortable.

OK, it seems pretty clear that it’s a good idea to have some final volume control to make sure to not destroy my ears and have some decent outputs to a headphone. So I’ll definitely include that.

You’d lose all the stereo from the PicoDSP too.

I figured I’d start with mono inside the modular for now, and only output to stereo. Mainly because of simplicity, but it will also save some room over stereo.
Or doesn’t that make sense?

I’d also note that I personally wouldn’t want to be actively mixing 4 knobs in 10mm of width. If you mostly want something you can just set and leave, I’m sure it is fine, but often people are “playing” their mixers and making adjustments on them a lot, in which case something slightly larger would likely be more comfortable.

Yeah, this will be a trade-off I guess. I’m not so sure about it either.
Maybe it makes more sense to just go for a slightly larger quad VCA and use that as my final mixer as well? If I’m not doing anything with the signals after the VCAs having the mixer doesn’t make a whole lot of sense, right?

The way most people use audio VCAs (as the final stage before output or effects), I think this plan makes sense. You can still use each channel as a lone VCA, too, and even use 2 channels as mixed VCAs and 2 channels to control CVs, as an example, at least on the three that I mentioned earlier (Veils, Quad VCA, Tangle Quartet). uVCA II also mixes if you only want two channels in less space.

I’ve never actually considered getting a dedicated mixer module or using my Mackie because I not only have VCA’s but a lot of my modules have volume pots that I use too. I have many options for controlling mix levels:

I’m also always running multiple inputs into Ableton via Expert Sleepers. I have a very cheap Novation controller for Ableton with faders on it so sometimes I will record 4-6 simultaneous tracks in and mix by writing MIDI automation. This can be nice because it’s a non-destruction process. Also can control panning. At any point later on I can tweak the automation. Much more flexible. If that’s something you care about.

Very useful info and I like the suggestion to use a DAW for non-destructive panning after the fact, didn’t think of that myself.

So, the mixer is out and the Tangle Quartet is in

And it seems one can never have enough VCA’s, so I’ll probably get some more eventually

Thanks for the suggestions/discussion so far everyone, it’s very helpful to someone who doesn’t know all this stuff yet

Have a look at
https://llllllll.co/t/minimal-mixers/189

I’ve just ordered a uraltone diy mixer as it will make my setup more mobile and let me play on the couch! But has some features that I really want (FX sends being the main draw).

The Pittsburgh system interface also appealed and gear4music had them in at £150ish. But ultimately I want to build as much as I can for my system.

So, the mixer is out and the Tangle Quartet is in

And it seems one can never have enough VCA’s, so I’ll probably get some more eventually

Sorry to be quoting myself, but after looking at some video’s and checking the specs/manuals I think I’d prefer to go with either an intellijel Quad VCA or a Bastl Instruments Quattro Figaro.
Mainly because of the separate CV attenuation and overal voltage/offset controls which the Tangle Quartet doesn’t offer.

Any pro’s or cons for one over the other? The Bastl has some more outputs, both audio and CV, but it’s obviously smaller/more fiddly and I’m not sure if their products are of the quality level I’d expect, mainly because their pots seem to be PCB instead of panel mounted, making them quiet wobbly, at least from what I’ve seen so far. Don’t think I’ll like that very much.

Have a look at
https://llllllll.co/t/minimal-mixers/189

I don’t own either, but I’ve decided that the Quad VCA would be the one of any of the choices I am aware of based on some of what you mentioned and the fact that my uVCA was flawless. I don’t think I could get into the Bastl’s odd layout.

I’ve been thinking about my output strategy.

Currently have have a now discontinued Meng Qi please exist and the outputs go into my mixer/soundcard. The benefit of this is I get 4 sturdy 1/4" lineouts. It’s not a mixer but the audio interface does that part.

From time to time I consider getting a proper “mixer” to combine all of my outputs with FX sends and honestly I usually find them to be WAY too expensive. I just saw the new Frap Tools Quad Stereo Console and while it’s beautiful, compact, and feature-laden it’s also the price of 3 second hand Mackie 1604 studio mixers (each channel has a 3 ch eq, mute, solo, 4 fx sends, full sized faders, etc).

Any of you just run your sources out to a mixer like this with the proper cables or adapters?

Lots of people do. As has been noted in many places on this forum: an outboard mixer is exponentially less expensive than doing it in rack, but at the cost of space and (potential) convenience.

I’ve been looking at the QSCGM as well, and yeah. It seems like a good deal within the eurorack ecosystem (cheers, @mdoudoroff) , given its feature set, but is also not going to be able to compare to all of the features you can get in an outboard mixer for a fraction of the price.

I’ve often used an external mixer with my eurorack. Recently I’ve been feeling simpleminded and just use some combination of small mixer modules & a Worng Soundstage with my output module (Vermona TAI-4; I could easily just use the Soundstage --> soundcard, but I got the TAI-4 cheap and I just like it)

OTOH I’ve seen people using something like the Befaco Hexmix system in small (84-104hp) travel cases to great effect. On paper/modulargrid it always seems a like a huge amount of mixer, but up close/in person the way I’ve seen people use it I could see a case for it.

I’ve been considering the XAOC Praga for this duty, although it is quite pricey and only has 4 channels, meaning that probably I would need some submixing before it as well. Anyone has any experience with it?

I really liked it. Some minor quibbles: The mute buttons can be a bit tricky to hit without bumping the volume knobs. Also the per channel mini VU meters are helpful, but without HRAD (which I have not used), there’s no summed VU meter. My only serious qualm was the inability to send each channel to both effects (as I use reverb and delay as sends). Otherwise it felt like a high quality mixer, and occasionally I look at it fondly on ModularGrid. The soft clipping on the output is something I’ve missed as I mix live - a very nice feature!

One point to add, is that Eurorack has gotten more stereo since it’s release, and one of my hesitations in reacquring it is the lack of a stereo channel (aside from using a stereo return and HRAD - which, to me, is unideal). I feel like XAOC would benefit from releasing something like the QSCGM as a complement to Praga and HRAD.

That Frap tools QSC looks pretty perfect, thanks for pointing it out! It also includes mutes, stereo inputs (or dual mono with crossfading), four VCA’s and two channels of CV controllable pan and aux sends (although only to one of the two aux sends and a different one for each of the two channels).
All in all this is about the same size as my current matrix mixer + four VCAs combo with a to me easier control scheme (channels vertical vs matrix mixer) and some additional functionality. Seems like a win to me

It also just showed up at modulargrid 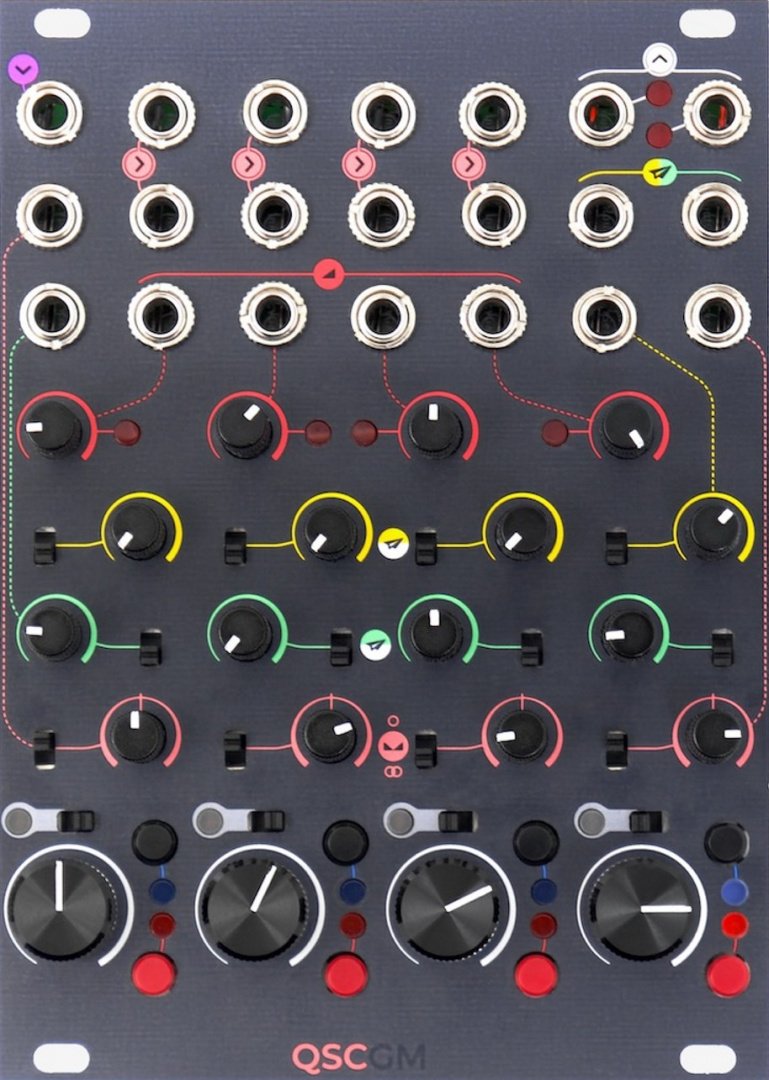 I agree, seems like a no brainer! I will consider QSCGM over Praga then

thanks for the help!

Yeah, I’m looking at it pretty seriously. My concern is the ergonomics of the trimpots in use? It’s got more generous spacing than my 321, but it’s hard to get a sense of how easy it is to manage those knobs in real time. (The 321 is a great unit, but it’s far from ideal for real time control.)

That’s a good point. I’m not sure, I don’t have any modules with a similar layout. It seems like my local eurorack shop should get them in stock, so I’m hoping I can give it a try there. If that happens I’ll share my findings.

When you’re considering a Eurorack stereo mixer solution—especially a big/“fancy” one—you have to really do your homework carefully. These complex products differ in so many little details, way beyond what I can figure out to represent on my comparison. Stock up on your favorite headache remedy before proceeding, because you’re going to find things to not like about every option.

It’s also critical to factor in your hidden HP costs, which will vary wildly depending on the rack you’re going to install the modules in. For example, if you were going to install two Pragas in a $650 Intellijel 7U performance case, your cost/hp is $3.125 ($650/208hp), so add $125 to the cost of your mixer setup (40hp X $3.125). (If you feel better discounting that somewhat because of the 1U row, go right ahead.)

Just wanted to post that I bit the bullet on the QSC, and my first impressions are that it’s fantastic. I had mentioned my concerns about the knob spacing, but for me it’s a non-issue. Having 4 stereo channels with VCA’s and effects sends is perfect. I’ve struggled with a few different mixers, and this was seemingly what I was waiting for. I could imagine some alternate decisions for it, in terms of how the space is used, but it does what it is supposed to do.

I haven’t seen a lot of mention of it, so I wanted to share some impressions if anyone was curious. Still early days, but it’s really excelled in my reasonably compact system.

anyone using a music thing startup & enjoying it ? i have an unassembled one