Learning Modular (Chris Meyer) is just about to publish a deep dive into Modular power supplies. you might want to see if this can be included as if its best in class, you would want an idependent review to say that.

Just found this page on the GenusModu site, very handy list of recommended PSUs to use with the bus board:
http://www.genusmodu.com/products/libb-psus.html

I’m afraid this is going to be a longer post. I have been thinking a lot about PSUs lately and the main reason is that want to change my modular case in the future, but am not really sure about what I should get. 9U is a bit too much for me, I’d like my modular to be more of a focused kind of instrument (even if I do have lots of modules) and one things I did wrong with my current case: it’s not great if you want to use it flat on the table (which is what I prefer), but I’m pretty happy with the Tip Top Zeus Studiobus PSU in there. It does seem to work well for me. At least I never had any issue so far, and I’ve been swapping a lot of modules in and out, and even had some not so well built DIY ones in there.

Power is a hairy topic, it’s probably the most complicated part of the modular, and the one which is more likely to create problems.
Though I think most of the time – and that’s something we tend to forget in these discussions – things do work even with not so great PSUs. What I mean is, there might be problems, but they might be hard to hear, so honestly who cares? I mean, I did use some plain Meanwell RT-50B (or RT-65B) power supplies wired directly to a busboard and in normal conditions I could not hear any noise, and didn’t have any other problems.
The noise&ripple values of these PSUs are much higher than what you get from most hybrid ones.
Most recent built-in PSUs like the one in the Make Noise skiff, the one in the Tip Top Mantis and the Intellijel ones all seem to have very decent specs to me (even if, as I said earlier, I find it a bit of a pity that the specs are always a bit on the thin side) and from what I could gather, work well from various points of view.
When reading about @ppqq’s concerns about ground problems I did some research, but could not find any real issues (just some minor things, which turned out to be “false positives”, or things that got solved quickly anyway) besides what has been already said, which does not seem to be a major drawback to me.

Still let’s not forget that you can have all sorts of annoying problems. I sure had a number of these over the years and some I were not able to troubleshoot (some I solved by changing PSU… but that’s far from being ideall). Problems can be that the output is noisy (hum, hiss, etc.) or that some – usually digital – modules go bonkers. I had them all, so I have become a bit more careful. The thing is also: you can have a nice working system and then at one point it starts to do weird shit. In these cases it’s hard to troubleshoot who the culprit is.

If I had to sum up what what my potential causes for PSU-related problems were in the past, I’d say:

Btw. I have to correct myself about flying busboards. They do not seem to perform much worse than most busboards in lab tests. At least that’s what some measurements Genus Modu posted on facebook suggest. Which I am pretty surprised about, since I always thought that they must be worse.

I guess my main reason for wanting a good PSU is that I want to avoid some of the “bad case” scenarios, which might be uncommon, but are still very frustrating and complicated to deal with if they happen. Also I have come to believe that it’s probably a good idea to get a more “all inclusive” solution, by which I mean: I want to buy a case that comes with a PSU, possibly designed and built into the case by the same people who made the case.

Going 6U: both the Tip Top Mantis and the Intellijel cases have a couple of things I really like: great form factor, adjustable legs so you can keep them tilted on a table and – and here we get back to the topic – what appears to be a very decent PSU. I can’t think of many other alternatives to these but of course if anybody has a tip let me know!

Got into a conversation elsewhere on the internet about the high cost of PSUs as a barrier to entry into eurorack, and this came up as a potential safe DIY solution:
http://musicfromouterspace.com/analogsynth_new/WALLWARTSUPPLY/WALLWARTSUPPLY.php

Anybody have any experience with it?

Could the LIBB technically be powered by a uZues?

It probably would. But I guess the connection to the LIBB could be a critical point. Afaik you need to properly connect the busboard to the PSU for it to work correctly and the µZeus only has ribbon-cable IDC connectors. Not sure it’s really a deal breaker, but could be.

The µZeus works for many people, but it’s certainly not the best PSU around. It’s a quite old design, and lots of things have been done better since it was first created.
If you’re going to spend some money to buy premium busboards maybe you could go all the way to get a new PSU as well, not saying the LIBB would not make a difference, because the tests show that it does, but it seems like these type of things are better done by going all the way, if you know what I mean.

I totally hear you and that was my original plan but then I thought I’d first try it out with just the bus board and see what happens. I absolutely plan on upgrading my PSU’s at some point. The uZeus’s have been problematic for sure. I also just heard back from John Loffink at Genusmodu and he had this to say about the connectors:

“Yes, you can use LIBB to connect to your uZeus. Within 1-2 weeks I will be releasing a kit that allows connecting 4 hp power modules with their europower connectors to LIBB through 14 AWG cables, for improved noise performance over using a ribbon cable connection.”

Anyone used a Befaco Jumpskiff? That uses a remarkably simple PSU based around a couple switching regulators that are easily purchased and relatively few other parts. It doesn’t seem like the PSU or PSU PCB is available by itself, but I emailed them last night to ask about that. I’m basically just curious if it works well, since it is impressively simple! Maybe the -isms PSU is similar, though I don’t know what converters it uses or any other specifics.

There is a DIY PCB called the Beetle that works similarly, but also is hard to find out much about.

NLC has a similar design, also based on an AC wall wart: 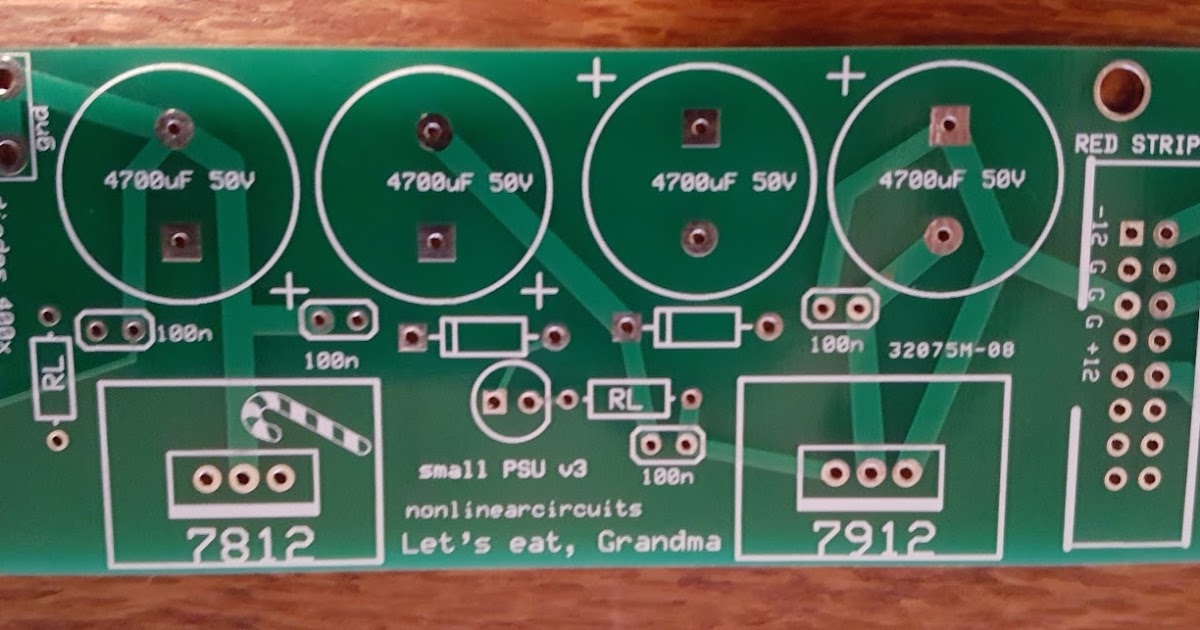 ...what a lame name, I was gonna call it 'hard candy' but can't be bothered. It was designed to power stand-alone Null-A panels. Anyway, it...

I noticed that in this case and (maybe?) the Pittsburgh cases they seem to be using some kind of standard PSU, maybe like this: 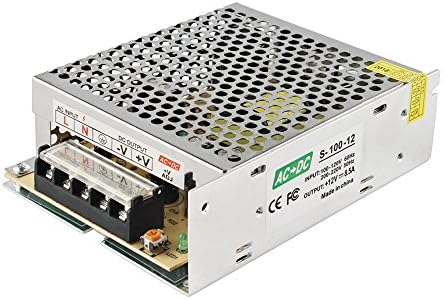 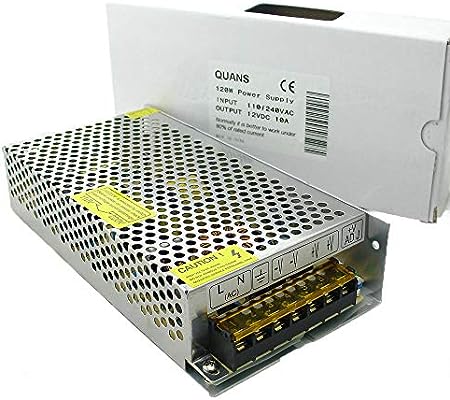 has anyone tried these?

edit: it seems like the thing i was seeing is the MeanWell RT65B, although I’m curious about other brands and alternatives as well.

I’m considering getting one of these:

I just don’t know much about the bus board/PSU it comes with. Does anyone know if these are reliable?

I just don’t know much about the bus board/PSU it comes with. Does anyone know if these are reliable?

The MeanWell RT65B is a very common switching PSU which you see used in a lot of modular cases. Mostly because it’s really cheap but better than most other switching solutions. It was not developed with audio in mind afaik and while being very reliable and performing well (it does not have a minimum load and is protected against most accidental mishaps), it does have of course more ripple and noise than most properly-designed hybrid (switching+linear) PSUs and definitely can’t be compared to a linear one.
I did go through a bunch of Meanwell-powered cases (still have one) and – while they do work ok – I would suggest to invest in something more optimized for modular.
The busboard seem relatively standard. I don’t know about noise filtering busboards, I’m not convinved they really do anything. What often helps a lot with reducing the noise from switching PSUs like the Meanwell here, is adding redundant wiring to ground to all possible points in the power distribution, something they don’t seem to have done here.

Thank you for this! Very good to know.

Btw. the thing about the ground wiring (and when I say “ground” I mean “protective earth ground”, not the 0V volt ground in your circuit) comes from this thread on MW:
https://www.muffwiggler.com/forum/viewtopic.php?t=131748&start=75

Does anyone happen to know of any hybrid solutions that are particularly compact? I have a Tiptop Studio Bus (older version) that has been awesome so far, but it is physically too big for the 64hp case I’m working on.

One of the only options of any kind that is compact and doesn’t require a 4hp+ inlet module is the Intellijel TPS30 Mini, which I expect is quite good - just curious about other options, especially with star distribution and a few more headers, ideally.

Any thoughts on this? If you have some time on your hands and are up to the challenge of reading through a very detailed and somewhat technical paper about power distribution for modular synths, I highly recommend reading this:

There’s a lot of hard technical stuff in there, but it’s all built around practical tests which they did to analyse where noise comes from and how it propagates in the system, so it’s not too hard to read.

Of course the document pitches 3 generic types of busboards against the LIBB and takes you to the conclusion that the latter is the superior choice, but the info gives away along the way is really interesting and somehow revealing (at least it was to me).

I am aware I’ve posted in this thread already but…

I’ve always used linear power supplies. Even with busboards that I am sure are not perfect in their design, I’ve never had any issues with extraneous noise or anything else that would spoil my modular synth fun.

If you really need to have a slim case which a linear supply may not fit in easily consider a separate box for it.

just as a peer review, planning out a 120hp system.

only weirdness is the laptop charger supplied makes its own high pitched noise (regardless of whether it’s actually plugged into the Row Power), but does not affect the instrument in any way.