mentioned on another thread. i’ve lately been interested in all-mono in composition and performance.

personally this is both about workflow and presentation. i haven’t been enthusiastic about headphones lately, and rarely am i sitting in an “optimal” position for experiencing stereo effects.

here’s a not-totally-old article that has some interesting points: 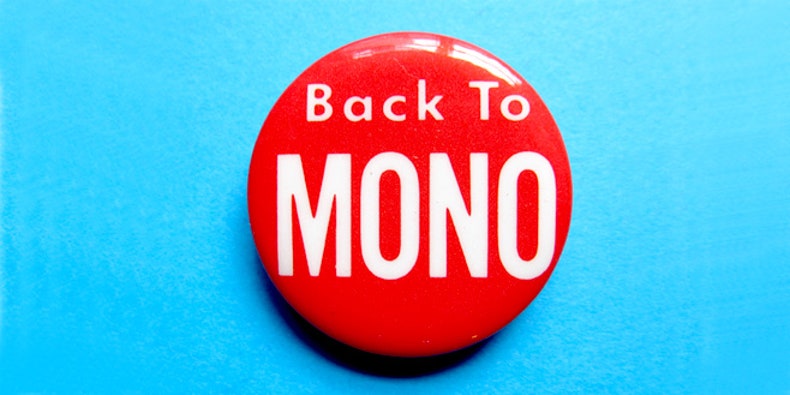 Though stereo sound has long been the standard for listening to music, Damon Krukowski argues that single-channel mono can actually offer a superior experience—an opinion shared by Brian Wilson, the Beatles, as well as many jazz greats.

(on a related topic-- in a live context i’m very interested in having point sources-- ie, several electronic performers, each with their own closely located loudspeaker.)

The laptop orchestras (PLOrk, SLOrk) use 6-channel hemispherical speakers, but each performer’s speaker is effectively a point source, I think.

yup, i do like mono point sources too… we tour a show with 30 of them carried by the audience

is this a system for which you’ve done different compositions? how is it working within the technical confines of this design?

As to the mono:

I love the experience of sound very clearly located in space. So I have been working on installations that involve multiple sound sources. In a sense that is working with mono sounds, but many of them. Within that I often reach for the ability to “move” sound location from one speaker/place to another utilizing stereo capabilities. This isn’t exactly about the “optimal listening position”, but rather about shaping/constructing environment with sound.

In short: I love working with mono, but I use stereo for the same reasons.

yes, we’ve written 3 pieces for it ( 2 walks and one game) - the biggest problem is that we don’t have musically accurate sync between the devices (i.e. audibly perceptible) - so we have to compose everything as phase composition. Sometimes this ‘creative restraint’ is great, but sometimes it’s just frustrating. The most interesting bit is conducting it actually. We don’t know which audience member has which part, and because each section is triggered by gps the part at the front always comes in first (unless the satellites are being flakey.) So as a conductor if a bass part comes in but you know you really want the violin for that section then you have to try and bunch the group up to bring in that part. (it’s a bit like sheep herding i guess, done with respect) - We’ve been talking about the interaction element as a rubber band. the audience have a certain amount of freedom, the way they move/group will really change the sound, but because we are conducting and we know where each section triggers we choreograph it quite heavily, this creates the rubber band frame that the audience stretch and push against.
(if we’re doing an interview for academics we also say it’s social composition, because of how the people’s interaction with each other changes the mix)

When composing/rehearsing, it’s always live in front of a PA. Unless I’m feeling particularly adventurous with panning, the left channel is duplicated to the right leaving me to focus on interesting textures and melody rather than intentionally controlling spatial characteristics (and it’s been a while since I’ve found myself thinking about stereo effects while watching a music performance).

I’m been a mono man for years. Since I generally have my amp/speaker next to my drums/setup, it all comes from the same/one place.

The Party Van has been mono the whole time too though a couple updates ago I made the reverb module stereo, but it’s still mono->stereo.

For performance I love distinct sound sources, but for mixes, give me a lush stereo field any day!

i came into the thread to say “a thousand times yes!” in agreement and fully expected to be in the minority

for me it is not idealogical…i merely have no need for stereo effects in my personal practice. in that sense stereo is in pretty good company along with guitars and vocals: i enjoy listening to how other people use them creatively but never EVER feel compelled to explore these things myself

i gotta say i like both in concept but always finish with stereo. just allows me a placement ability that i deeply appreciate. i will try some stright mono stuff and see it as a challenge. where will it take me…

one project i’m hoping to get off the ground soonishly is myself and 4 friends - who all have various combos of buchla, euro and monome gear - arranged in a circle, with one speaker each, all performing live, chamber-music style, in a proper auditorium or appropriately gothic haunted castle, with the audience circled around us.

must sit down and right that grant application…

Definitely prefer stereo. Dense layered stuff is easier to work with when its got twice the space to play in.

Bumping an older thread because I love seeing this debate play out. I’m a mono guy unless it’s something very specific. I’ve worked at studios where engineers want to stereo mic acoustic guitar. Insanity in a mix. Same thing with those mixes where you’re spatially inside a drum kit. Hh all the way left and floor tom all the way right. Can’t stand it

Beatles in mono all the way

Agreed on the mono Beatles recordings are special. They also received more attention with the band being present during mixing.

Working in mono makes me concentrate more on structure and the sounds. Only in last stages do I add stereo as a kind of sweetener. But always with mono compatibility. I currently only distribute (very limited) on audio cassettes. This also makes me keep both high and low frequency energy under control.

But I’m not religious about it, I like working in 6/8-speaker horizontal surround now and then. Haven’t tried spheres yet

MONO is cool. Only bummer: on headphones it sucks BIG TIME!