Just bought a new monome 128 from an authorized dealer. I got the unit today, downloaded and installed both sum and terms. However, upon plugging the unit in via USB only about 16 of the buttons in one corner quickly flashed on then off. It looked like they were flashing their way to the center, but again only about 16 of the buttons lit up. Is this the standard launch behavior? Here is an image of how far out the buttons light up during launch. Once it hits this point the unit goes dark. 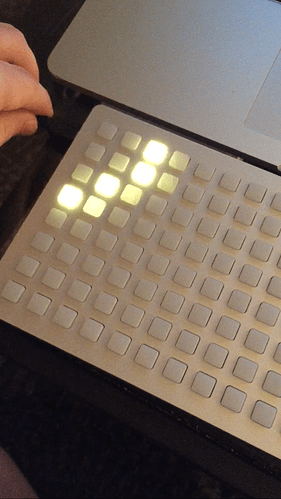 Also, when trying to use the monome with terms or sum I am getting no feedback. The buttons do not light up, no sound is made. Ableton can’t seem to locate the monome.

Is my unit faulty or am I a major idiot. Please tell me I am just an idiot. I don’t want to have to send this back and wait for another unit.

igluu congrats on your new monome! when you first plug the monome into a USB slot it lights up in the corner where its connected to indicate that it is indeed getting power (I kind of imagine that it’s representing sparks that fly like in the movies when something is plugged into power). So yeah that’s what is supposed to happen.

Also, when you open Sum, it opens 2 windows on your screen. The top window should have a box that reads “monome 128” and a connect button next to it. If you don’t click “connect”, sum won’t read the actions you perform on your monome. That should be all you need to do to have it read it.

Thanks for the help. I seemed to get terms working. I am going to chalk this up to me being an idiot.

Which makes me really happy. Which is a weird thing to say.