20 characters of thanks @tehn

Much more similar mechanically to the 2016 generation than the 2011 “pushbutton” arc.
All custom mechanical work by @tehn vs the original 2011 which has off the shelf (but very nice) Bourns Encoders.

Price isn’t astronomical either. Someone grab it!

that is exactly why i asked. lol thanks for clarifying.

I found an offer for a second hand grid. The seller does not know the exact model. Is it possible to identify it with the following photos? Would it be possible to use this grid with Norns scripts that use “varibright”, e.g. Granchild? 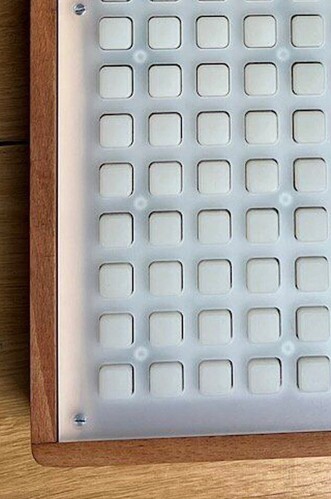 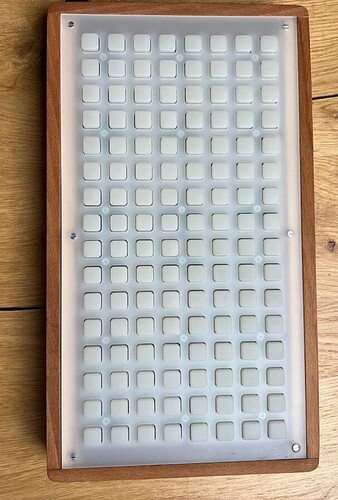 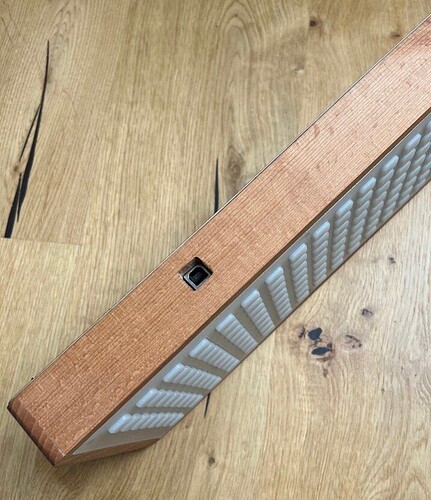 It’s a DIY job rather than an official Monome one in any case: all the Monome-built grids have aluminum faceplates, this one has partially translucent acrylic, and the case & faceplate mounting look very “homemade” as well.

Someone more knowledgeable may have a clue what it’s built from and whether that something supports varibright - is it from the older 2010 official non-varibright Monome kits, Adafruit Neotrellis / okyeron’s design, Sparkfun pads or something else?

Thank you for your reply. The seller writes that the buttons glow orange and that it does not work with the script MLR (buttons “play sound” but no visual feedback). Based on this info I also guess that this is a 2010 DIY version.

My question is: do ANY Norns scripts still work with this version of the grid? Could it be used for something else?

Assuming it’s built to the monobright spec it should work fine for some scripts, and many other scripts can be adapted in a few lines of code. Also, anything you write yourself could support monobright :))

I currently have two grids that appear the same from the outside - mini usb, two tone all aluminum enclosure. When I opened them both up they had very different identifiers. 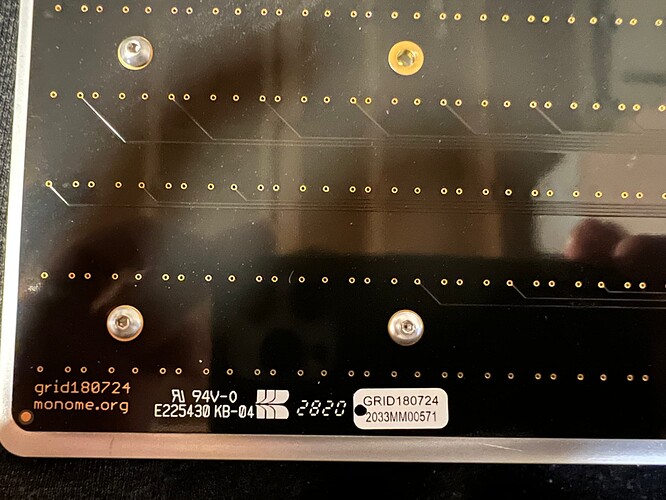 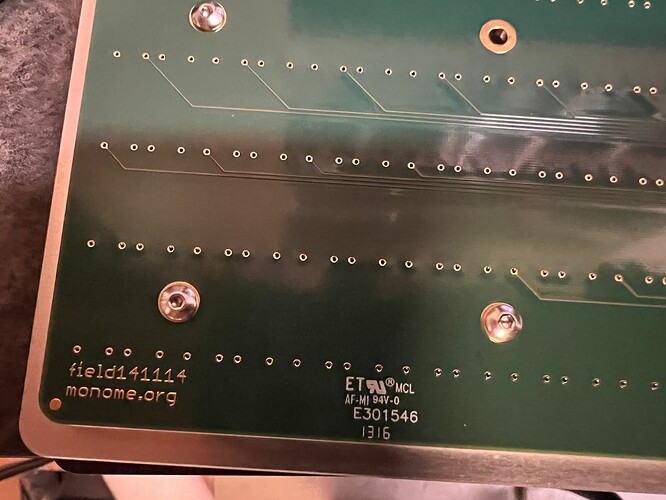 minor circuit revision, main difference is which side the usb port is on

I couldn’t find a thread or a page about this, so I’ll ask here. I am just wondering what was the reason for the gradual change in the monome grid design, from the warmer colours of the past to the colder current white version?
And if you don’t mind me asking, will the (expected) December 2022 version stick to current colour or will it be different again?
Thanks.

in short, the switch from stark orange to white came in 2015, with the 2021 run aiming for clear and neutral. brian’s currently working on the coming circuit revision, initiated to overcome chip shortages, which presented an opportunity for a gentle tilt back to the bright light warm light of the 2015-era runs.

fwiw – gaining proximity to the day-to-day operations at monome has clarified for me that assembly and supply management, even beyond the current situation, is fraught for anyone operating at our scale. i’m amazed by just how much love and brutal dedication have fueled kelli + brian through iterating these tools over nearly two decades.

Is this due to the fact that it’s just easier on the eyes (less strain, etc.) or other factors?

Funny you mention all this. I remember while waiting for my grayscale 128 (WISH I HAD GOT THE 256 AT SOME POINT!) and going to a Monome meet up in the Mission district in San Francisco.

@edison performed with his two lunchbox grids and @rajaTheResidentAlien performed as well (maybe with a big ol’ 256?). Brian quietly hung out and watched the sets.

It’s bonkers to think that was something like 12 years ago. And even more crazy to see how this small team has redesigned their timeless tool through so many iterations.

LEDs that are marked by the manufacturer as being the same color can have a lot of temperature variance between reels or even on the same reel, so it can be difficult for an assembler to have the same gut feeling as we do when they review the overall look at full-bright. this led to a lot of double-back QA in our workshop, to determine whether a unit’s LEDs were totally uniform. when they’re right, they’re really lovely.

while the exact temperature was always variable between units in the bright light / warm light runs, QA’ing 2021 grids just required a lot more hands-on time from me and brian – so, we’re hoping a return to a warmer color will help reduce the workload, so we can push a bit more focus back onto the projects we’re passionate about (more open-source software projects, education resources, and community engagement).

I seem to remember some discussion about the difficulty of matching white LEDs across a single device when the GS series came out in 2010. My gs128 is almost calico in its diversity of color temperatures. The LEDs range from pure white, to warmish, to pale green. I like it. It’s my grid’s fingerprint.

Here’s how it looks with the grid brightness minimized. At full brightness the color differences are less pronounced, but they’re still there. Maybe Brian sent me a prototype RGB grid by mistake? 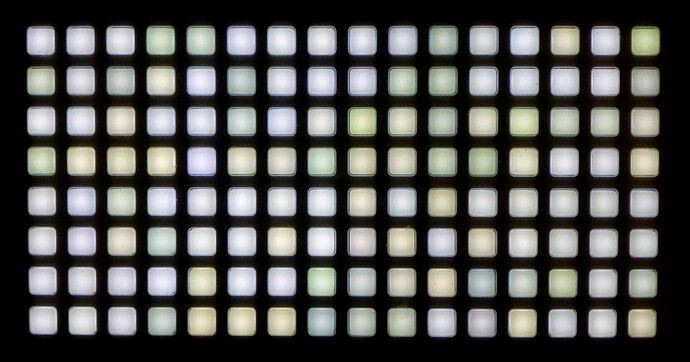 i recently learned that this phenomenon has a name: “tint lottery”.

This creates such a weird aesthetic dissonance, simultaneously visually appealing but with a nagging suspicion it’d drive me crazy if it was my own grid.

I was a bit disappointed by the range of color variety at first, but it grew on me to a degree. Now I wonder if I’d prefer a more tint-matched grid or not, given the option. To be fair, it’s helped me embrace imperfection, at least in this instance, which is something I haven’t always been good at.