Posting this after my 4th and hopefully final module shuffle. I love my Monome modules but the USB cables, power from Switch, 1/4" cables to walk, etc… does make integration into an existing system problematic. OCD me wanted all my Monome in a row, but in my 252 that just wasn’t possible - if I chose the bottom row the USB cables effectively created a wall preventing access to the bottom of the second row, ditto if I tried the second row I couldn’t access the bottom row. So this seems the only sensible solution - Switch and Walk modules BELOW the modules they connect to. The USB cables don’t seriously impact access to the other modules. Yes, this is the control centre of my set up. Cases to the left and right generate audio. 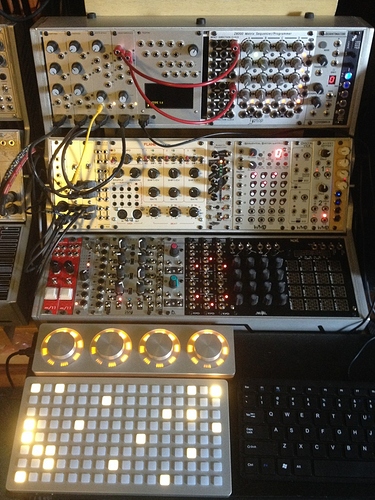 how are you liking the m11 trogotronic?

I just use it as a trigger/gate generator. It generates a gate every time I hit it, unlike some of my other modules which get antsy on dry skin days…

wow-- first double-switch setup i’ve seen, and most usb cables in a modular case ever.

wonder if we could track down some even-shorter usb cables for setups like yours.

That could help, thanks. Shorter and bendier… But I’m fine with this for now. I really don’t want to move these again for a while…
FYI - Walk only just fit in the 252… all the Monome modules are a height (the board and power connector behind the faceplate) which makes it tough getting them in and out… but Walk is that little bit bigger. It’s not moving, that’s for sure…

I had exactly the same experience as @lloydcole. My cases are a little different, so I managed to get the trinity modules, TT and switch all together (the Walk is in the lower boat), but it took a bit of juggling to not have the USB cables be in the way. I also need the TT vertical so I can read the screen.

So I’m definitely on the hunt for shorter and bendier USB cables too.

I may end up grabbing one of the new Make Noise skiffs and using that as the home for all the monome modules (I can’t justify the expense for isms right now, though it looks great) … but I really like having just one self contained case to deal with.

I’ve got a second Switch - and will likely pick up another White Whale - for another more drum oriented case. So I can grab either case, the 128, my Octatrack, and go. 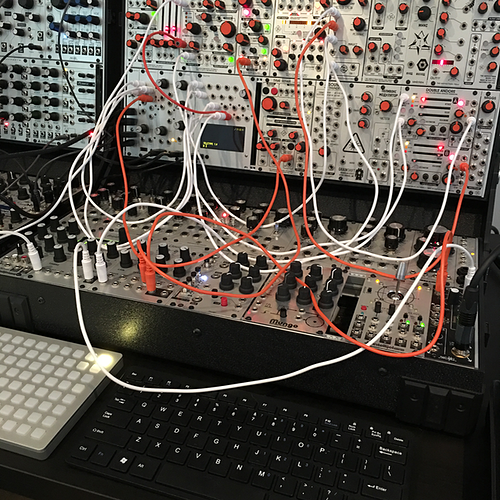 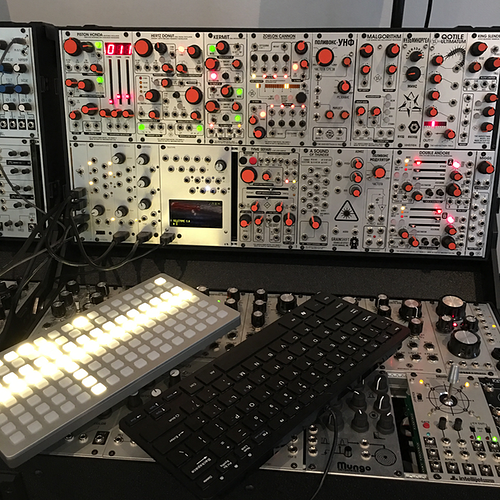 ps : cases are Amalgamod. For me, perfection. 12U x 102HP, folding and lightweight.

cases are Amalgamod. For me, perfection. 12U x 102HP, folding and lightweight.

Yes. I’ve looked at them (they look wonderful) but when I needed them they weren’t available so I bought a used 252, then and other 252, then another 252…

Are they really Ok to fly with? Smaller planes, etc…?

I thought about that, too. But the 128 and the Arc and the TT Keyboard force me maybe 10" further way from the rest of the system… add a skiff between them and that me sitting/standing a long way from the top row of the 252. So I buckled down and found a way to make it work, sort of…

There is no perfect set up in Eurorack. As soon as it seems that way someone brings out a new case or new module that we must have… We like to think that we’re above that but most of us aren’t…
My only rule, for the time being, is that new stuff must not be bigger than the old stuff it replaces.

I’ve yet to fly with mine, but other people have with no issues.

I’m maxed out with 3 x Amalgamods … any more and my wallet / brain explodes.

I’m maxed out with 3 x Amalgamods … any more and my wallet / brain explodes.

I’m trying to do the same with 3 * 252s. I was around 175% of this 2 months ago but I now no longer have a single module in any of may cases made by a company I don’t like/trust/respect. There are a few still waiting to be sold…
The plan is for the studio and the stage to be one and the same. Constantly trying to juggle between the two ideals is a massive waste of time, for me anyway.
I estimate I wasted /5 of a year.

I think I’ve “wasted” 4 years getting to a similar place, though it’s been a fun journey.

My instrument is now locked at 3 cases. If I want something else I need to sell something to make space. I’ve found the manufacturers I like so it’s time to stop the endless buying and selling and rearranging and actually make music.

I’m dreading NAMM 2016 though. Going to be some very cool new toys I suspect.