Development log for the monome-rack plugin for VCV Rack, with ports of the open-source firmware from the monome eurorack modules (teletype, ansible, and the ‘trilogy’ of white whale/meadowphysics/earthsea), support for hardware grids and arcs of all editions, and a software grid emulation. [GitHub link] 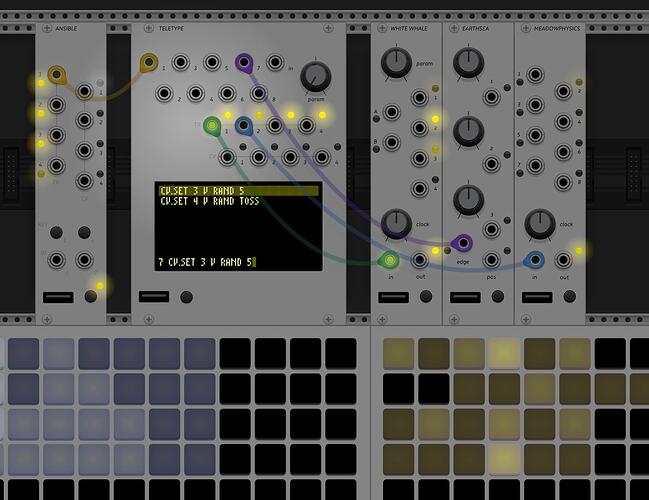 I started playing with VCV Rack about two weeks ago and fell in love with it. My physical rack is purely for studio play though I often wish I had something small and portable to noodle on when I’m sitting in a coffee shop. VCV Rack is the perfect extension for me and is currently installed on my Surface Book running Windows 10.

The new version v0.5.0 has been seriously stable for me. There’s about 35 packs of modules available with 97% of them free.

I was just thinking over this long weekend about how nice it would be to have a Teletype, a bunch of Telex, and a virtual Grid and Arc to play with when I’m flying light. While I’ve already run a connection between my main system and VCV Rack it could use some polish, but by January I think the developer Andrew Belt will have many of the nits worked out, so yet another way to extend the signal flow.

I would like to add my voice to the positive vote side of those who’d like to see Monome available on VCV Rack.

Just wanted to say this is an exciting development. Can’t wait to try it out, and I’m especially hopeful for Teletype implementation.

Are you using the touch screen at all with VCV Rack?

I rarely use the touch screen in any case and the screen has been detached from the keyboard base maybe half a dozen times in two years. But I love the incredible power, resolution, weight.

Is it possible that a hard fork of the source code might be easier to maintain?

AFAIK VCVRack is C++ too, a hard fork would mean you could take advantage of the C++ bits, and get rid of all the global variables, and generally not have to worry about maintaining compatibility between a microprocessor based C project vs a desktop CPU based C++ project.

amazing work. i’ll have to check out vcvrack now!

let me think over the brand issue for derivative works. my primary issue comes with user expectations of direct support for things i didn’t actually make.

but you’re absolutely not trampling, thank you for exploring this. curious to see how you did the shim layer when i get a chance to look at the code.

Speaking of VCV Rack, has anyone found a good place where discussions are happening about it? There are at least two Facebook groups, one official and one non-official, and a fairly un-utilized one at switchedonrack.com/forum.html. Thanks.

Speaking of VCV Rack, has anyone found a good place where discussions are happening about it? There are at least two Facebook groups, one official and one non-official, and a fairly un-utilized one at switchedonrack.com/forum.html. Thanks.

I’m in favor of starting a Lines general VCV thread. There’s a ton of noise on the Facebook groups, so it’s hard to keep up with everything.

Is anyone else working on this or related problems?

Aleph codebase already has an avr32_sim library. It falls short of full hardware emulation. That always seemed like a tantalising prospect though - mostly just because flash cycles are quite long & I like using gdb when things explode. But for an aleph, full simulation is even trickier than for a eurorack module because the device has a DSP coprocessor (although we also emulate that to some extent). It’s still a lot of work to pull everything together, and I don’t think a VCV rack emulation of a full aleph would be that great a thing anyway. The main benefit of emulation there is dev tooling, and we already found more pragmatic solutions to the same problems.

I’m going to link our avr32_sim https://github.com/monome/aleph/tree/dev/utils/avr32_sim just because it already exists and allows us to run a fair bit of our avr32 firmware’s backend code on desktop. But don’t know whether or not it’s a helpful base to start from.

Anyway I’ll be watching your progress on this with some considerable interest!

EDIT:
also I spoofed the monome driver at higher level to hook into serialOSC in order to run bits of our firmware inside of puredata. This hack definitely comes highly recommended! (should solve your USB hotplug issues)

VCVRack is a free-ish* virtual modular synthesizer. With v.50 now live at vcvrack.com, and dozens of modules already available, the still fairly new software has got quite an audience, and quite a healthy developer community. Since there isn’t a lot of evident consolidated conversation going on about VCV online, beyond a couple Facebook groups, maybe we can chat about it here. Perhaps for starters, how are people finding VCV Rack to work for them? I’ve got it running on a late-2013 MacBook Air. …

A hard fork would have been a more straightforward way to start get one module into the VCVRack ecosystem. But it wouldn’t result in a workflow that would allow testing/debugging module firmware in a software IDE! Like I said, that’s my secret motivation here. I also didn’t relish the idea of reimplementing every single feature in WW, then starting over again from scratch with, say, Teletype. This strategy should hopefully be more maintainable than having to keep a set of hard forks up to date.

Thanks! Completely understand re: user expectations.

The shim layer is really nothing special, it’s literally the simplest, dumbest thing I could make work as I went along. I have some ideas on how it could be generalized a bit into a C++ interface on the VCVRack side that calls a set of exported hooks from the cross-compiled firmware .dylib.

Oh nice, I did not know about the avr32_sim library! Will look it over, thanks. From a quick skim it seems like we had the same basic idea, with a few different choices on where lines are drawn, and yours is a lot more extensive.

Spoofing the driver and hooking into serialosc was something I considered – it means all module connections could go through serialosc, which would simplify things – but I think that’s orthogonal to my current hotplug problem. That issue is because I added hardware grid support really quickly once I got home on Sunday (didn’t bring my grid to the mountians with me, poor decision) and all I did was drop in daniel-bytes’ excellent serialosc C++ example code. I’m not handling any of the exceptions it throws on writing to disconnected ports, etc., hence the crash. Should be easy to fix.

thank you for doing this! this is exciting on so many levels. allowing more people to use the module firmwares is great in itself, but i think this will also provide the incentive to keep them alive and developing further. of course, as a dev i’m most excited about being able to test / sketch ideas easier, i’m glad this is also your motivation.

i’m also hoping this will serve as an additional push for future firmwares to be developed in a manner that would make porting them to different platforms easier. one of the things i’m planning for the next version of orca is a rewrite that will separate hardware specific things for this exact reason. @sam did a lot of work of separating hardware bits in teletype too. emulating libavr32 is an interesting approach, haven’t considered that! (i need to check out avr32_sim).

The plugin now builds correctly on Windows, if that was holding anyone back from trying it out.

But it wouldn’t result in a workflow that would allow testing/debugging module firmware in a software IDE! Like I said, that’s my secret motivation here.

That would be cool…, so long as you don’t end up with so many #ifdefs as to make the VCVRack version unrecognisable from the module version.

But it does throw up some ethical conundrums, IIRC there are only 100 of each of the trilogy modules in existence, there are bound to be many more users of the virtual version, which brings up the issue of support burden and new features (e.g. clock input for White Whale). At what point will the tail try to wag the dog!

I also didn’t relish the idea of reimplementing every single feature in WW, then starting over again from scratch with, say, Teletype.

I’m not suggesting you start from scratch, but make a fork of the existing code base with the intention that any changes you make to get it working in VCVRack are never ported back to the module version (that way it’s easy to add some extra inputs for clocking and pattern changing, etc, etc).

However, if you do want to keep with the shim layer (which would admittedly be very cool), one potential solution to the global variables issue that should require few changes in the module code would be for the shim to run it’s instance in a separate process (and thus separate address space) with an IPC to communicate between the child process and the parent.

The major downside is that it’s inherently not cross platform, so you need to find some sort of higher level wrapper. The plus side is that the same mechanism could be used to emulate the II bus…

@sam did a lot of work of separating hardware bits in teletype too.

Only on the “language” side alas, most of the UI code is very hardware dependent.

emulating libavr32 is an interesting approach, haven’t considered that! (i need to check out avr32_sim).

Adding a shim layer is a cool way to deal with an existing code base or if it’s purely for testing & development. If you’re starting from scratch though I’d humbly suggest that you put the abstraction layer much higher up. It’s something that C++ templates would have been good for, but I don’t think C++ is viable on the AVR32.

Adding a shim layer is a cool way to deal with an existing code base or if it’s purely for testing & development. If you’re starting from scratch though I’d humbly suggest that you put the abstraction layer much higher up.

my plan is to separate the actual engine (so it will be essentially a completely hardware agnostic state machine) and then have a UI layer (which would be responsible for communicating with grid and in case of teletype, screen) and a hardware layer. the main module would be responsible for initializing everything and running timers/events queue, and should be hardware agnostic as well, except for the initialization part where it would plug appropriate instances for the UI and hardware layers. there will be another layer that would translate events (triggers, grid presses etc) into appropriate transitions for the state machine. for the UI i don’t think i’d want to use the event system (or maybe have a dedicated queue), but rather letting the state machine talk to the UI layer directly (for grids/arcs i think the existing libavr32 provides sufficient level of abstraction already). <- should probably start a separate thread for this!