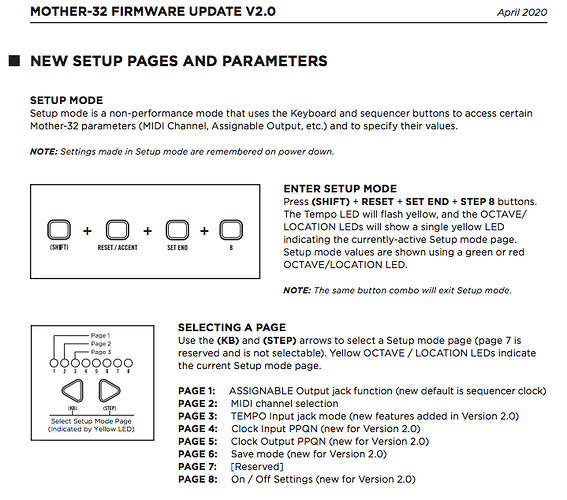 Screen Shot 2020-05-21 at 00.27.50719×634 82.4 KB
I have owned a Moog Mother-32 controller since it was released back in 2015. It has become an integral part of my setup now. I have also bought the MOOG DFAM which is part of the same series. MOOG recently released information about the new commercial version of the MOOG Subharmonicon, which is super exciting. Before that, however, they released a new firmware update for the mother-32. a synth that has existed for 5 years. I was amazed to learn how a lot of features had been added both in terms of things you would not have been able to do before, and also features fixing various things like stopping the embedded sequencer from playing when hooked up to an external sequencer.

As much as I really love these instruments I also must admit that when I successfully downloaded the new firmware update I had no idea how to access any of the new features. Where could I go learn about these new features that my instrument was now capable of?

This is why I am creating this thread. I hope that there are others like me who recently upgraded to the new firmware 2.0 and who want to share experiences trying out these new features. I would also like this place to be about sharing cool patches and videos of playing with these types of machines.

Let us explore MOOG together!

stopping the embedded sequencer from playing when hooked up to an external sequencer.

I literally screamed out loud when I saw this in the update notes. I’d been “putting up” with it since pretty much release. I was so close to selling it mainly for this reason. Now it’s a real keeper.

Where could I go learn about these new features that my instrument was now capable of?

With the update zip came a nice PDF that goes over the changes. Like an addendum to the manual (which afaik has not been updated).

I had been thinking i had been doing it wrong until i read that in the release notes.

I just made the update two days ago. The random sequencer is fun to play with, but haven’t really explored anything else at this point.

Right yea this manual. sure I will have to check this out!

I just saw this video https://www.youtube.com/watch?v=qsTkcL0U3XU. like all of the other videos on the new firmware update, it is all about the same new features. like oh here is the new sequencer modes etc. but they never just make a video on the whole thing. I get there is a lot to cover but i feel like the crowd they have for this very specific thing would be interested no matter what

True I feel the same way. I also updated like a week ago but i havent used the new features that much. I guess I have to get use to the fact that I can use it in more ways.

another thing I kept thinking about after i updated was, if you can load a new firmware update on the moog through midi, would you then potentially be able to make your own SysEx files and add your own features to it?

This video was amazing, did any of you see it?

Do any of you use a patch library like https://mother32.earthcontrol.de/ to save your patches or use it for inspiration and modify it?

Yeah that sounds cool! I will definatly try that out

I bought two of the first run Mother-32s and the live MIDI pitch bend never worked on them. Oh well. The 2.0 firmware update fixes that, it’s amazing. Another fun thing is that the clocks are now controllable much better. The clock division makes more sense to me now.

On top of this, while I fixed the infamous “sequencer always starts/stops on MIDI start/stop” with a filtering MIDI splitter, thanks to the 2.0 firmware update I could rearrange my MIDI setup in the home studio, putting the splitter front and center, removing some MIDI THRU use and I no longer have to filter MIDI in hardware, allowing for easier SysEx use across my little fleet. This turned out helpful for configuring the Subharmonicon. Another win!

Finally, there are still two features that I asked for and hope to still see in a future update: ability to upload sequences to the device with SysEx, and legato glide. Both features would maximize the potential of the Mother-32 for live use.

That’s kind of brilliant – just change the LFO shape to create different sequences?
I might need to steal this idea for a Teletype script…

It would be pretty awesome to have a mode for CV-addressable patterns within the current bank, too, as a sort of metasequencer. I guess that doesn’t really fit with the “Tempo” input the way that the other modes do, but…I still want it.

Played around with this last night - it is indeed pretty fun and I’m sure there are more creative ways to use than I came up with.

One thing: my M32 does not willingly go into setup mode without several tries. Same for getting out of it. Many times, I just power cycled the unit to get out. Anyone else experience this?

One thing: my M32 does not willingly go into setup mode without several tries. Same for getting out of it. Many times, I just power cycled the unit to get out. Anyone else experience this?

If you are like me, you are not pressing RESET/ACCENT hard enough. My trick to get it right is to do this as an arpeggio (just keep holding what you pressed already): SHIFT then RESET/ACCENT then SET END then 8. The entire chord takes like 0.5s. Press pretty firmly.

It’s very cool they added this mode. I loved this feature in the Sputnik 5-step sequencer and I had emailed Moog about adding it a while back. Sadly I don’t have my Mother anymore… Playing wavetable LFOs into this a really interesting way to get unique repeating patterns. I do a similar thing with an A-152 these days.

I have the M32 in Analog Clock 2.0 mode and mult’d the clock on its own mult. The sequencer sees the clock but advances 2 steps instead of just one. I can divide the clock, change the PPQN, speed up the LFO, slow it down - still, 2 steps per click. The Single Clock Advance mode works fine. Anyone else experiencing this?

I checked to make sure Swing was off too. I can of course just clock it through MIDI but I’d like to sync up the LFO if its possible and I think this is the only way.

After putting it off for many months, finally got around to busting out the ol MIDI cable and doing the update on my 2 M32s.

I think my first go at it has been my first time REALLY HAVING FUN with the sequencer on these!

Yeah, it’s still pretty basic. But it felt very limiting before and now it feels much more collaborative. Really enjoyed the retrograde playback.

Oddly enough, I just ordered a Winter Modular Eloquencer and a Pamela’s New Workout to REALLY bring my Moog stuff up a notch or 5. But this update is WELL worth the time if anyone else has been putting it off.

Watched the Patricia video at Moog using the Eloquencer and that was all it took to sell me. Looks like it should speed up the sequencing input process about 200% in no time. I look forward to going in a total opposite direction with them as well.