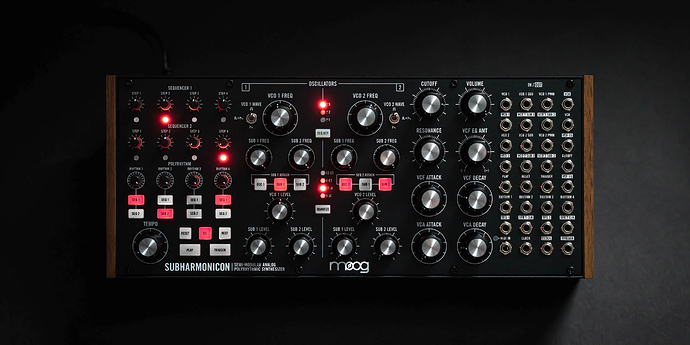 Since this appears to be shipping to customers now, I thought giving it it’s own space (outside the hype thread) would be appropriate.

To the lucky few, how are you integrating this into your workflow? I am specifically interested in building it into a stereo/panning setup, but we’ll see how that goes.

To those who missed the announcement, here are some videos.

mine showed up in the mail today 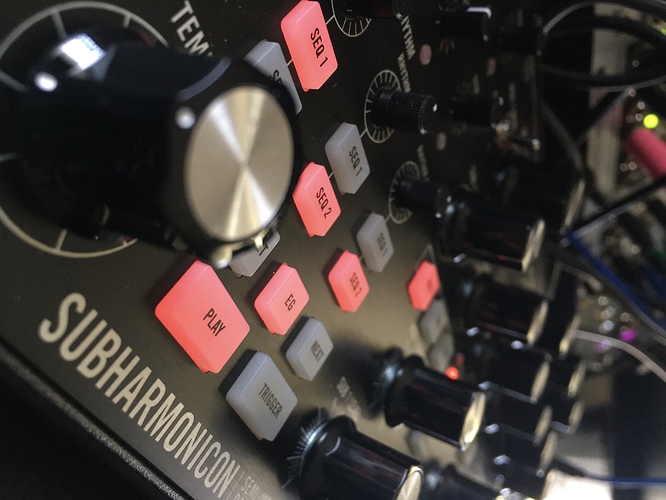 The release of the Subharmonicon made me revisit Loopop’s video on replicating with Maths and try the patch. Not a 1:1 replacement, but fun nonetheless.

I’m interested in this device. Ever since the build at Moogfest, which I didn’t have the time or money for. But I may get one once they are restocked later this year.

I watched the Mylar Melodies video, very helpful in making me want to sell some unused modules and buy one of these. I like semi-modulars, seems like a shortcut. I have VCOs, LFOs, VCAs, filters, random modules etc. but I really like the semi-modulars too.

Trying the Maths subharmoics patch now. Thanks for this!

Control sent an email saying pre-orders were back on, so looks like I’ll be seeing on in/around July.

I love the sound and idea of it, but I’m not a fan of the tiny form factor of this series (M32, DFAM etc.) particularly those tiny little plastic knob substitutions. Looks like an incredible ideas generator though!

I thought it was worth mentioning (since it rarely gets talked about and I suspect not a lot of people know) that Doepfer has a whole range of Trautonium-derived modules, including a subharmonic generator.
If one is interested in these sounds and already has a modular system where this module would fit, this may be a better option for some people.

A short film with score composed on the Subharmonicon by Suzanne Ciani:

The Subharmonicon seems to really nicely round out the “mother” series.

Anyone running all three? Or have plans to? It seems like they would make a really fun little Berlin School system. You would probably want to run another drum machine along that setup anyway right?

I just got mine yesterday. Serial number #649 found its home

I was so excited for it that I went through the manual before getting my unit. So it was rather easy to get started once I did have the device on my desk.

Frankly, I think it’s a home run for Moog. Totally agree it complements the other Mother ecosystem devices very well. Also, looking at what it decides not to do it becomes obvious how focused it is. There’s no EXT. AUDIO input, VCF rez is not CV controllable, there are no utility patch points. Instead, you have the 32 patch points utilized to the max for the polyrhythms and subharmonic sequencing. It’s fantastic.

The Subharmonicon features two VCOs, each of which provides two clock-divided sub-oscillators. All this is mixed into one signal that goes through one EG, VCF, and VCA. While you can achieve fantastic results with that alone, I was tempted to split the two VCOs into their own signal chains so that you can pan them in stereo. Turns out it’s quite easy to do!

All you need are two separate EGs. I’m using Mutable Instruments Streams since it’s not just a pair of EGs, it’s also (or rather, mainly!) a pair of analog VCFAs. I’m using one channel as Left Pan and the other as Right Pan.

Now, having Streams is handy as it integrates an EG, a filter, and a VCA, in an elegant small package. But you need some mixers to blend the three voices per oscillator into one signal that you feed to a Streams channel. So, for each oscillator, I used the built-in mixer on a M32 to mix the subs with each other, and then two VCAs in Mutable Instruments Veils to mix the main OSC with the mixed subs. Since I have two Mothers, and Veils have 4 VCAs, it’s enough to end up with two separate channels per SubH oscillator.

I hope you can hear this in the video, this opens up the instrument in an interesting way: you get two paraphonic synths in one. Sure, each channel is still using one EG but now each sequencer only triggers the revelant oscillator. That lets notes resonate and generates an organic stereophonic ensemble.

This is exactly what I wanted to see done with the Subharmonicon, now that I know it’s possible I’m even more excited.

Mine just arrived. Starting using it alone but in the long run plan on having it coexist in a tiny-sub-studio space with a M32 and another moog case with some MI stuff and an sensible. We’ll see how that goes.

It sounds amazing out of the box but I have no idea what I’m doing. Time to go watch loopop’s video again!

The Quantize function does not affect the VCO 1 and 2 cv ins, right?

My partner delivered a slice of pie with some ice cream right before my friend stopped streaming and raided my channel, so, yeah, you also get to watch me occasionally cram food into my face?

that pie sounds great, what are some of the effects you have on the subharm? it sounds massive.

I recently got my grubby hands on a Subharmonicon, Model:Cycles, and Xaoc Odessa, and figured I’d clobber together a video of a short improvisational. It’s the first video I’ve ever shot and edited of a jam, so I’d love to hear people’s thoughts on the video aspect too.

I realized afterwards that my arm blocked a lot of the eurorack, and I’m struggling to figure out where to place my camera that isn’t a “top down” view, is horizontal, and isn’t blocked by me

I also tried to do a sort of “in-my-mind” walkthrough, but I’m not sure if the angled text on the side shot worked well or looks tacky.

Some initial thoughts - Subharmonicon is a magic melody-making machine, and despite my initial fears that I wouldn’t connect with it, it feels like it can do no wrong - every random tweak I did sounded good, so that was a bit of a surprise considering new pieces of gear are usually the opposite experience

On the other hand, I struggled with trying to get Odessa to do triad chords with Hel and Harmonaig - a quick email to Xaoc indicates to me that Odessa+Hel was not intended for harmonic tones, which… makes me wonder if I’m using it properly

As I mentioned in the video, I’m really struggling to get Cycles’ FM bass drums to give me a good thudding techno kick - I had to really crank the low EQ on my Xone and compress the track to get it to an acceptable point. 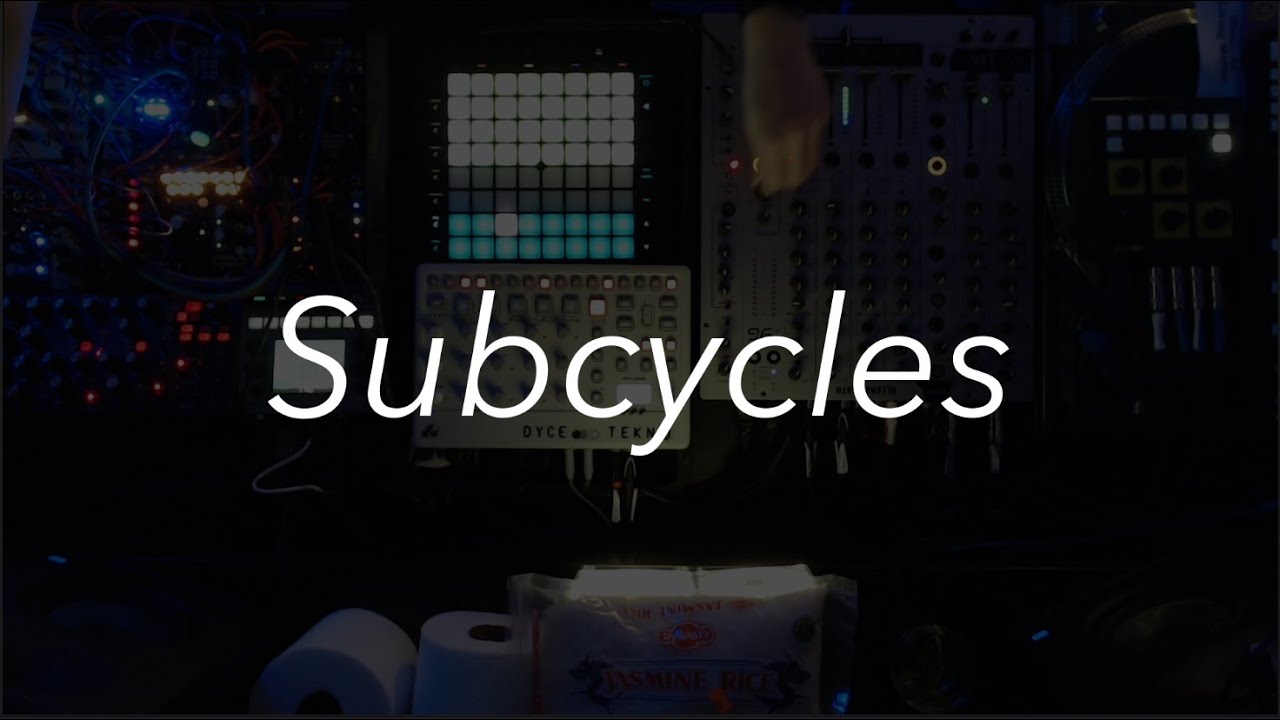