Looking for some advice/ideas for a minimal rack based around the Morphagene.

Looks like a perfect starting point for me into Euro world but would like to keep it small. Just manipulating it manually actually sounds great from YT videos I’ve seen.

I originally thought of building a System Concrete up replacing out the Phonogene but sure there’s a more minimal approach.

I have quite a few effects and filters, could these be incorporated?

Any advice would be appreciated

i recently got a morphagene and i love it so far. its so playable all on it own and i think it really does make a great starting point to build around.

i’m hardly an expert on it as i’ve only had it a week or two, but the first thing i would add is randomness. i have a wogglebug racked next to it and i am often putting the stepped or smoothed output into the slide input to add some motion to some relatively short (~1-3s) genes. the clock and burst outputs will also be useful for morphagene’s clock input.

Phonogene was my first module ever (Morphagene didn’t exist at the time). It was a great starter, I had other non-modular synths, and my computer…feeding noises from those sources into Phonogene kept me entertained for quite a while.

I just got a Morphagene recently, it’s a really fantastic module. Just about anything will complement it. Wogglebug is a good choice, as you’ll get a clock (which Morphagene loves…being able to start and stop recordings on the beat is great) plus the random modulation will help you skip around between splices.

The system concrete is a really good guide, you can’t go wrong building up a system based on that design. Maths was my second module after Phonogene. Wogglebug probably would have been a better choice, especially for Morphagene. My only change with the system concrete would be to swap the echophon for a erbe verb. I ended up building almost exactly the by-the-book concrete system, except with Clouds and Echophon as my main effects modules for quite a while.

+1 for maths (or any multi function generator) and wogglebug!

Something divkid says at the end of this video is also true, “that was all just manual manipulation.”

I would second having a trigger-able random generator. I have a Qubit Chance and consistently just hook the two up for tons of glitching & sample mangling!

Have a blast with that amazing thing!

I’d suggest a Radio Music for a source. Being able to tune between random stuff is just really fun.

I’ve also only had mine for short spell, and everyone else here covered the basics. You want ways to clock and modulate beyond self-patching. Plenty of options there!

Thanks for the advice, the Divkid video was actually what started me thinking that I could do a lot with just that and slowly build on it. May be time to part ways with my Octatrack, the results I can hear of the YT vids sounds much better to my ears, I only ever use the OT for sample manipulation on one or two tracks, would rather build something specific for the job

If there’s one thing the OP-1 taught me is that an FM radio is the most fun thing to sample from. And since the Morphagene has automatic gain-staging of the inputs, the best companion of the Morphagene is a FM radio, IMHO.

My favorite Morhpagene companion is Pamela’s New Workout. It’s like they were made for each other. You can clock and control the MG as tight or loose as you want to.

Another great addition is a more complex filter or a filterbank. Xaoc Belgrad fits nicely imho.

a lot of my recent patches have started with playing something on the OP-1 into morphagene… then i like how that sounds so much i don’t want to add any more layers and i just end up recording that and twisting some knobs as i go.

seriously, throw a morphagene into an intellijel 42 hp case, play literally anything into it, get amazing results, and decide how to fill the rest of the space once you learn how you like to use the module. on my desert island list for sure.

The MG is the perfect module for a small system. Had mine in a 42hp case for months until I put it in the main case.

Would this be a good start then? 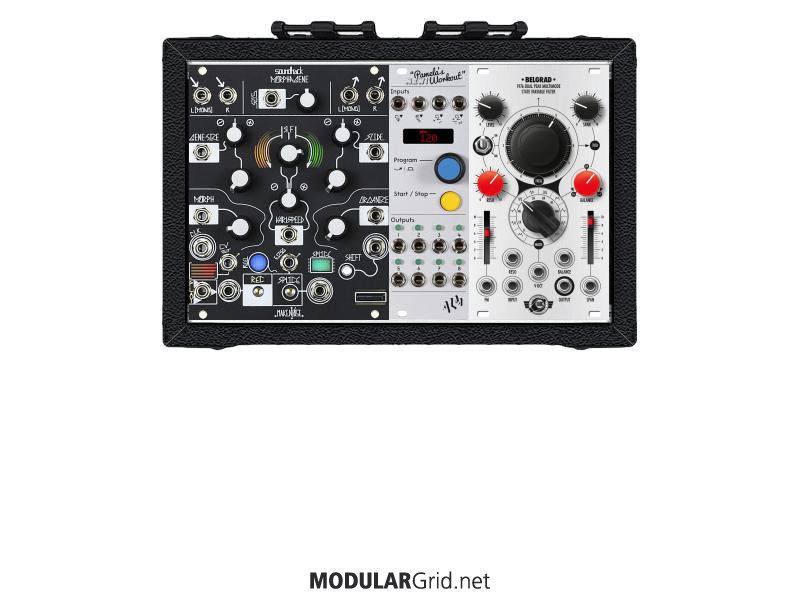 Very curious about the integration of the Echophon here. Are you only sending a mono signal from the Morphagene to it, or mixing L and R outs from the MG before going to the Echophon?

In my setup I was using a phonogene. For Morphagene I’ve mostly used the mono input. I wonder if MN will come out with stereo erbe verb / echophon in the future?

In my opinion it’s a great start. Pair it with a delay pedal and you can do a lot of damage.

given that the Filterbank has some CV/gate in/out and could be patched in, I’d personally get something besides a filter to go with the Morphagene/PNW to start with - your own tastes are the important thing here, but maybe a CV controllable delay like the Chronoblob or something would give you more variety.

You might also consider something like a logic module (Erica 3hp logic, etc)…could give some interesting pseudo-random gates/triggers when combined with the PNW, and/or you could also add a random module like a Turing Machine, Wogglebug, or similar. An Intellijel 4U case is what I’d probably want to go with if planning something small-ish around a Morphagene to work in some utility stuff in minimal space, so you could use the 1U row for noise/random source, I/O, attenuators to control the modulations from Pam’s…

Pam is actually a pretty flexible random module. You can also patch it with itself for some great irregular clocking.

Good point, there are some new skipping features and such that my Pam’s (old) Workout doesn’t have so I wasn’t really considering that.