Curious for peoples’ thoughts on this module. Surely some folks around here have one?

Personally, I’m thinking about removing my Morphagene from my isms case and putting it into an Intellijel 42hp mini case with a function and ornament & crime for focus & learning (reverb, delay, and other via pedals before a mixer), and would love to hear (and take inspiration from) how people are getting on!

I don’t have a Morphagene and don’t plan on getting one, but I have found myself moving ever more inexorably in the direction of smaller clusters of modules that create semi-autonomous instruments, or at least control clusters…so I like this idea a lot.

I do have an O&C in the works, as well as a Dervish. You might want to have a look at the Dervish…? The effects are re-programmable, and it has the essential sync which many other delay effects lack, and it’s stereo.

When I finish mine, I’m doing what you did with the O&C, and packaging it with the Dervish and a couple other smaller DSP-based modules in a dedicated 42hp case. For no particularly good reason outside of the conceptual, I’m keeping my fairly small cluster of DSP modules together. Everything else I’m really using these days are all analogue, mostly in NLC-Serge/R*S/Elby territory, with strong support from a bunch of Intellijel analogue modules. I’m also starting to move in to 4U territory…but that’s another story.

I don’t have a Morphagene and don’t plan on getting one, but I have found myself moving ever more inexorably in the direction of smaller clusters of modules that create semi-autonomous instruments, or at least control clusters…so I like this idea a lot.

This has been keeping things sane for me and - as I’m gathering - many others. I really like the idea of smaller systems that with a long patch cable or two interact in rather specific, programmed ways, rather than one larger system. Somehow looking at a wall of modules yields a feeling of being overwhelmed rather than a feeling of getting ready to explore.

The O&C is a really nice piece of kit. It can be whatever you want it to be in so many ways. I think it’s the perfect heart to a contained system in which it’s the beating heart, much like…oh I don’t know, ansible and teletype! Will be curious to hear how you use it in the midst of all that analog equipment. I’m a bit less of a purist in that way, I think, but hey, different strokes!

I have one! Love it so much… one of my new favorites for sure. I have also been considering moving it into a small (48hp?) standalone sampling /utility system that I can bring around with me and an op-1 + field recorder or something like that. I have a pair of minirig speakers and a portable power supply for my k mix and rack - and I feel like the morphagene is the perfect module to bring on little music making outings. Like @Larrea said, I think it’s practical to have different size cases rather than one big one that you can’t really move around.

Jogginghouse posted this little rack w their Morphagene when they first came out and it was what inspired me to start thinking small! https://instagram.com/p/BS5xNv3AX8z/

Yeah the 48hp sampler system seems super ideal to me. I’m thinking about the below, but perhaps the 4 2hp modules makes more sense than the function in some ways… 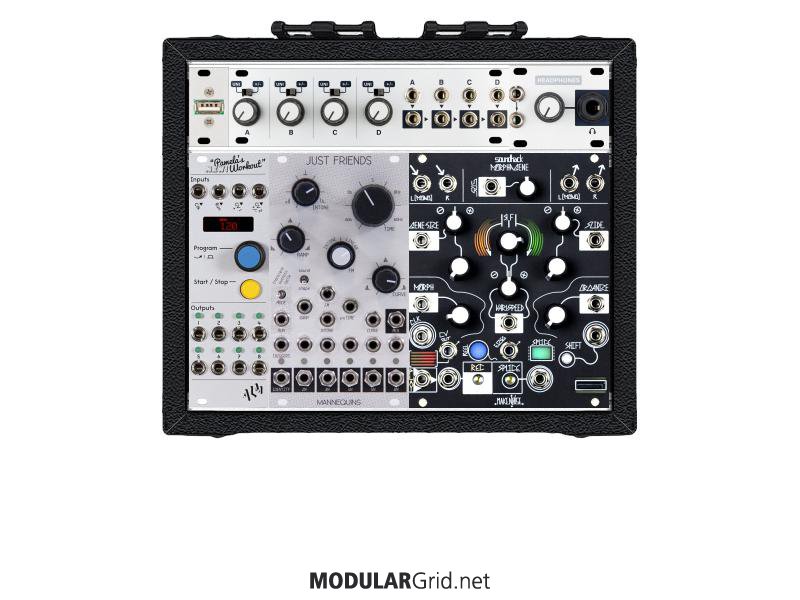 With a potentially more feature-packed alternative: 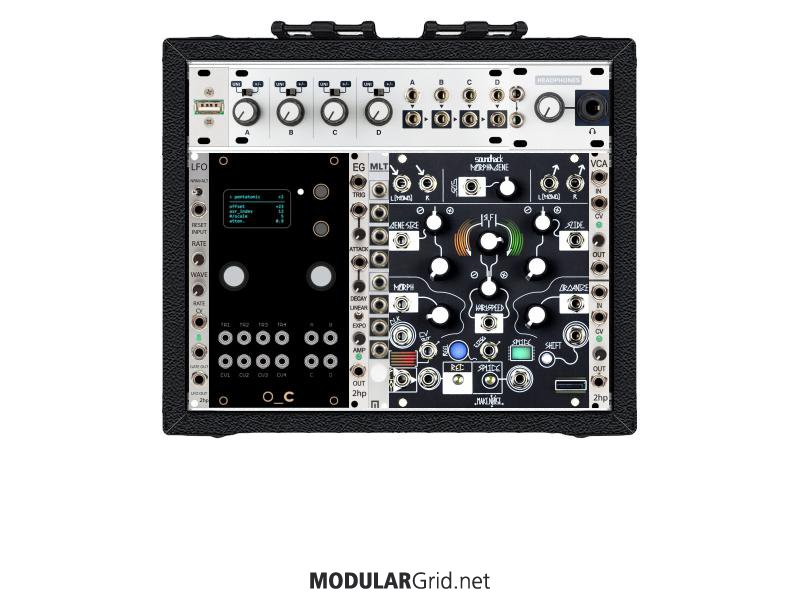 I know this is moving dangerously far away from the stated subject, but the one pain in the ass with the smaller clusters concept is power. It’s the thing I’ve struggled with from day one. To that end, I’ve been putting together small cases where I can use a combination of 4MS Row powers and daisy chain to halve the number of external AC-DC wall warts/convertors/cable, and, in my weirdo cigar box cases, using the NLC 12VAC input PSUs, which cost less than $10 to build, and am daisy chaining those too. The major caveat is you have to be very clear on which wall wart goes where.

Yeah the 48hp sampler system seems super ideal to me. I’m thinking about the below, but perhaps the 4 2hp modules makes more sense than the function in some ways…

That is a totally sweet little system. I love it.

EDIT: good choie on the Quadratt! I have like three of them or something, and could see having a fourth. Indispensable…if you have the Intellijel 4U cases.

Ah that looks super fun! I think I was mistaken about the HP of available cases. Power Lunch is 44 and Intellijel is 42… I thought I saw a 48 somewhere but maybe that is just a DIY project.

Synth rote like used to have a 54, though it also had two 1U rows in. Many small cases tend to be DIY, alas.

@Larrea Yeah, though the Intellijel cases seem to pack a pretty serious power punch. As do the pulp logic lunch boxes, which are just a bit harder to come by but nevertheless similarly badass, especially with the little stand!

@stripes Interesting. Yeah, the Intellijel is 42 and the power lunch is 54, which are the two I was thinking of, but many different cases these days. The pulp has 2 1U rows as well so it can really pack a big punch.

If I went with that I would totally grab a maths instead of a function and…well…It’s a real shame that Intellijel didn’t consult the existing pulp 1U system. Having a quadratt adjacent to a bunch of pulp 1U tiles would be the real ideal.

Power is kinda the pain in the ass with Euro in general. But for smaller cases with relatively low load requirements (even with a bunch of digital), I think you’re right that you’re probably fine with a MFOS-style rectifying PSU with an AC adapter. There are many decent variants available, like that NLC one.

Yeah. Definitely off topic, but I’ve had problems with Doepfer power before. The supplies across the board can feel inconsistent!

I have one and absolutely love it. Far more playable in a live setting than the related phonogene, and the gene size / morph controls are so smooth and musical. Been thinking of doing exactly what you’re talking about with the smaller dedicated sampler rig, esp with a 1U row - it’d be so nice for live use as an addition to a nonmodular rig. Here’s what my skiff looks like for an improvised set this weekend at Eaux Claires fest:

Kinda combining the two MN samplers and using each differently - PG for short phrases cut up and sequenced by WW then run thru 3 sisters, MG for either sampling the outcome of the PG>3S signal or for taking longer samples of my duet partner and creating a more flowing granular bed. Taking a long sample, turning up the grain & morph knobs, then sending a smooth random voltage to slide makes for some beautiful resampled unpredictability.

Agreed on the controls - they feel much more finely tuned and the samples respond so gracefully under CV control.

That rig looks super fun - I bet playing with Ears in that context makes for some interesting interactions. Curious to hear how you’re using that within the rig!

love ears! using it 3 ways in this configuration - sending a pulse trigger from an ableton drum rack into it, then using that to sync / clock WW & wogglebug with my laptop OR unplugging the pulse cable and advancing the clocks by hand by tapping on the piezo OR fuck clocks all together and use the piezo as a CV source, usually controlling the freq of 3 sisters as a tappable/scrapeable lpg kinda thing.

Nice technique!
I used the old one to mess with the circuit Abbey G8/intermix combo. So much fun.

Getting mine tomorrow and I am really excited about the idea of sampling and processing same source material in parallel with both morphagene and phonogene, with hopefully some nice stereo results. I say ‘hopefully’ because I really need a reason to keep both modules

Yeah that’s a really flexible use-case! Super nice to be able to flip back and forth between things in that way. Food for thought…

Somewhat off topic but I’m curious if you usually use the straight out of the ears to 3sisters or the envelope. I’ve stick to the out mostly because I can’t seem to love the way the envelope follows the signal. Very interested in hearing what you’re getting out of that system if there’s anything online.

Went through with the mini-system. Here it is in action: https://www.instagram.com/p/BWIv9QvAjxe/?taken-by=myles_avery

Really loving the simplicity of it all. Works astoundingly well with the o_C, particularly as a four channel turing machine for use as looping CV’s.